This report was updated on Feb. 4.

Following the popular revolt that overthrew the U.S.-allied dictatorship in Tunisia, the Egyptian people have taken to the streets in the hundreds of thousands demanding the fall of another U.S. client dictator, Hosni Mubarak.

The U.S. gives $2 billion per year to prop up the Mubarak dictatorship. Egypt is second only to Israel as the largest recipient of U.S. "foreign aid." That "assistance" has been used to buy the tear gas and other weapons and equipment that are killing Egyptian people attempting to exercise their right to protest and speak out. 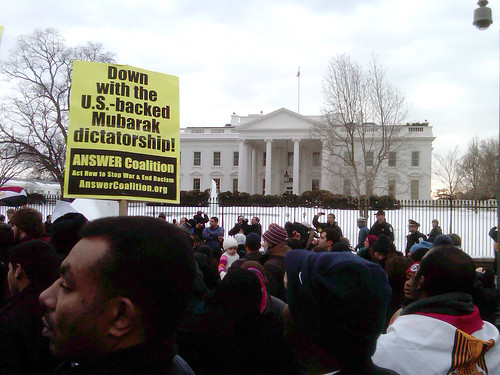 Hundreds gathered outside of the Egyptian Embassy and later the White House on Jan. 29. People from the Egyptian and other Arab communities traveled from throughout the region, organizing mainly on social networking sites, and were joined by members of the ANSWER Coalition and many other progressive activists and organizations from the D.C. area.

Protestors took over the street in front of the embassy, filling the entire block, and chanted militantly in English and Arabic for several hours. International, national and local media gave widespread coverage to the protest, including images that were run repeatedly on CNN all day and evening.

After spending hours outside of the Egyptian Embassy, many people marched over four miles to the White House. Taking over the street and going through many busy neighborhoods, they chanted “Hey, hey, ho, ho, Mubarak has to go” and “Oh Mubarak, can’t you see, time to join Ben Ali,” referring to the former president of Tunisia who fled from Tunisia on Jan. 14.

Once arriving at the White House, the marchers joined hundreds more who were already there, filling Pennsylvania Ave. and chanting “Hey Obama, listen up, Hosni Mubarak’s time is up.” They remained there for several more hours and pledged to return. 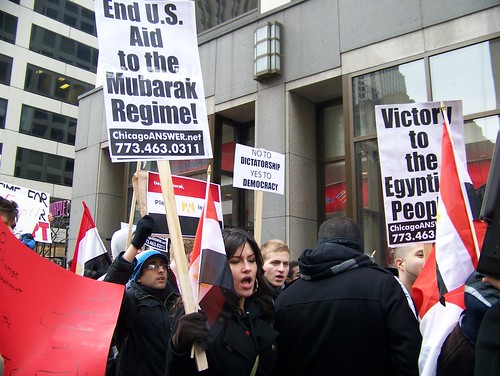 Outside of the Egyptian consulate in downtown Chicago, as many as 2,000 people gathered on Jan. 29 to demand an end to the U.S.-funded Mubarak regime and call for victory for the Egyptian people. Young and old, protesters traveled to Chicago from all over the Midwest on buses organized by mosques and community organizations. The protest made its demand clear: that Mubarak’s regime must go and make way for a government that can respond to people’s needs.

Protesters carried signs calling for “Victory for the Egyptian people” and demanding an end to U.S. aid of the Mubarak regime. The large and vibrant crowd chanted, “Brick by brick, wall by wall, we will see Mubarak fall,” and “Hey Mubarak, you will see, the Egyptian people will be free!” Other popular chants included “Mubarak’s got to go!” and “No justice, no peace! U.S. out of the Middle East!” Arabic chants included “Long live Egypt!”

Chicago is home to one of the larger Middle Eastern communities in the United States. Parents traveled with their children to Chicago to take part in the protest. M. Cherif Bassiouni, president of the Egyptian-American Society and DePaul Law Professor explained that in Egypt, “[o]ver 90 percent of the wealth ... is in the hands of 200 families.”

Many community and mosque leaders spoke at the rally following the picket. Heather Benno of ANSWER Coalition-Chicago also spoke. She explained: “The same war machine that sends tear gas to Mubarak and bulldozers to murder the Palestinians denies us jobs, healthcare, housing and equality here in the United States. On March 19, on the eighth anniversary of the United States government’s criminal war on the people of Iraq, we will call on all those who oppose U.S. oppression abroad to take to the streets not only in support of freedom and self-determination in the Middle East, but also to support justice and liberation right here and around the world.” 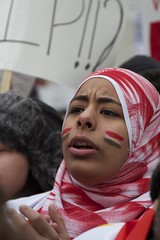 ANSWER members joined thousands of New Yorkers and others from the Tri-State Area who gathered on Jan. 29 at the United Nations Headquarters in Manhattan. The protesters, who were from many different backgrounds, demanded Mubarak leave Egypt. Chants included calls for freedom and justice for the Egyptian people.

Protesters also showed strong support for the Palestinian people, with chants that connected the struggles for freedom across the Middle East with their historic struggle for self-determination.

Edward Pages of March Forward! was interviewed by national Egyptian Radio and delivered a message of solidarity with those fighting for their freedom in Tunisia, Algeria, Jordan, Yemen, Egypt, Iraq, Afghanistan and Palestine. 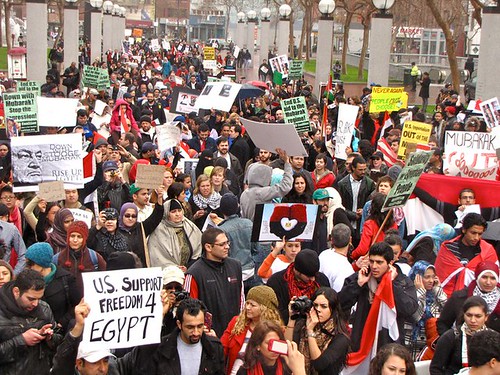 At least 1,000 people gathered at Market and Montgomery in San Francisco for an afternoon demonstration on Jan. 29 in solidarity with the people of Egypt. The militant crowd, comprised of people from the Egyptian and Arab community and their allies, demanded the U.S. puppet Hosni Mubarak step down from office and that the people of Egypt be free and guaranteed their right to self-determination. Dynamic chants could be heard in English and Arabic, including, “Down, down with Mubarak,” “Obama, Mubarak you will see, Egyptian people will be free” and “al sha`b yuriid isqaaT an-niZaam” (the people want to bring down the system).

As the protesters began to march down Market St. to Civic Center, the crowd grew and became more militant and enthusiastic. People were jumping as they chanted. An Egyptian student attending San Francisco State University, Salma Elshakre, expressed the feeling of the crowd: “The demonstration made me feel like I was contributing to my people’s cause and supporting their fight for both their and my rights, even though I couldn’t be there in person.”

At Civic Center, there were statements and speeches made in solidarity with the struggles in Egypt, Tunisia and Yemen. Omar Ali, an organizer with ANSWER Coalition-San Francisco, emceed the rally. Speakers included representatives of Bayan USA and Iraq Veterans Against the War, Professors Mohammed Salama and Dina Ibrahim from San Francisco State University, Michelle Shada from the Arab Film Festival and Farida Ezzat of University of California, Berkeley. 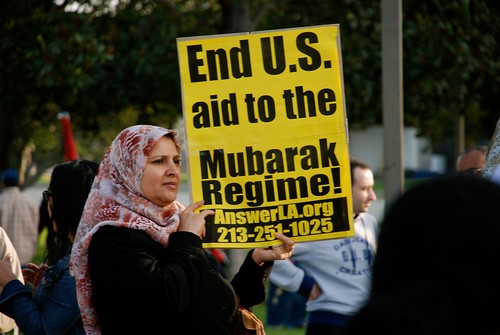 Approximately 800 protestors gathered on Jan. 29 in front of the Westwood Federal Building to show their support for the struggle of the Egyptian people for freedom and to make demands on the U.S. government to end their support of the Mubarak regime.

The protest was largely attended by members of the substantial Egyptian and Arab community in Los Angeles and other solidarity activists. Regardless of age, religion or political affiliation, the protestors showed great unity in their unrelenting support for Egyptians and all people struggling around the Arab world.

Initiated by Egyptian students and activists, the ANSWER Coalition-Los Angeles provided logistical support to the successful demonstration and vowed to continue their support for the struggle.

According to one protestor: "We can no longer just sit at home at watch as our brothers and sisters in Egypt struggle for freedom. It is our obligation to come into the streets here and demand an end to U.S. support for the suffering taking place." 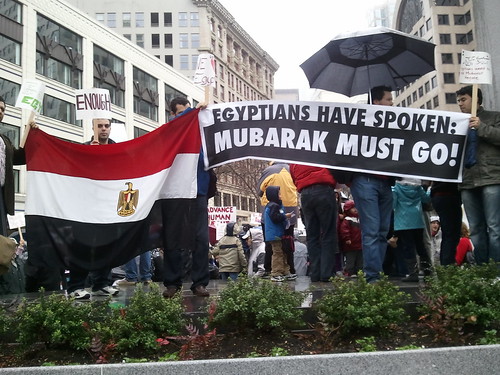 As many as 300 people came out in the rain in Seattle to stand in solidarity with the Egyptian people on Jan. 29 at Westlake Park. Many demonstrators were from the local Egyptian community, and they were joined by progressive groups and individuals including the ANSWER Coalition-Seattle and other progressive organizations.

Local media extensively covered the demonstration. Many people held handmade signs. Some signs showed photos of the repression; others featured inspirational images of the Egyptian uprising. Spirited chants were led by young men and women in both English and Arabic. In Arabic, people chanted “This guy Mubarak, what does he want? For all the people to kiss his feet. No Mubarak, we will not kiss. With our boots we will step on you.” In English, people chanted “Down, down, down with Mubarak” and “No justice, no peace.” At one point, a group of young children took the stage and called for support for the Egyptian revolution.

Organizer Ahmed Ayad explained that “Everyone in Egypt wants Mubarak to step down.” Another organizer of the protest, Zeina Askar, thanked ANSWER Coalition-Seattle for providing the sound that was used to lead chants and for speeches.

On Jan. 31, many activists and people of many different nationalities braved extremely cold weather to show their support for the Egyptian Revolution. The protest was held at a very busy intersection at St. Louis University.

People held many different signs in solidarity with the struggling Egyptian People, including, “End the Dictatorship Now!” Many cars honked as they passed the protesters.

Dr. Khaled A Hamid, an Egyptian born activist, spoke about the struggle for freedom and liberation from the imperialist-backed Egyptian president Hosni Mubarak. He spoke wonderfully about how the revolution in Tunisia spread like a fire to Egypt, challenging the domination of those who spend billions of dollars on military equipment to use against the people of the Middle East.