New Book - Divide and Ruin: The West’s Imperial Strategy in an Age of Crisis 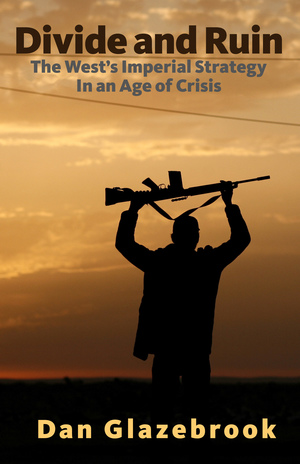 Divide and Ruin: The West’s Imperial Strategy in an Age of Crisis is a collection of articles by British author Dan Glazebrook. Originally published in The Guardian, Morning Star, Counterpunch, Z Magazine and Asia Times, Glazebrook has assembled these writings to illustrate a new strategy by U.S., British and other imperialist powers. This new strategy employs proxy military forces to achieve regime change in any country that resists imperialism.

Glazebrook shows the brutality of the West’s racist and exploitative foreign policy against the global South, citing examples from Libya, Syria, and elsewhere in the Middle East, Asia and Africa. He explores in detail the role of AFRICOM as an imperialist force operating on that continent. Economic and social issues in Britain also come under scrutiny, plus the role of the media and social movements there.

Divide and Ruin argues for new counterweights to the Empire’s plunder in a winning appeal to reason and humanity.

Praise for Dan Glazebrook and Divide and Ruin: The West’s Imperial Strategy in an Age of Crisis

“Dan Glazebrook analyzes a new overarching strategy employed by U.S. and British imperialism since the collapse of the Soviet Union and the end of so-called Cold War. Limited by its relative decline in the context of the global economy and unable to sustain the Bush-like adventurism that led to the Iraq debacle, the Empire, argues Divide and Ruin, seeks now to rely primarily on proxy military forces against those it targets for regime change. The goal though is nothing other than the long-term weakening of any country that serves as a regional counter-weight to the absolute dominance of imperialism. From Glazebrook’s view, U.S. and British foreign policy should be viewed as a wrecking ball of sorts aimed at weakening the strongest and most independent players in the Global South.

“Dan Glazebrook is one of a handful of authors that I depend upon for valuable insight, information and nourishment.  While most of the intellectual world is rushing to support the next NATO act of aggression in the name of human rights, Glazebrook shows in this book how it is NATO and the West which are undermining peace, security and human rights throughout the globe.”

“Dan Glazebrook gives clear analysis of very nuanced and layered world affairs. He reports and exposes the excesses of imperialists while enlightening a growing critical mass of people concerned about what their governments do in their name. This work is an important read for anyone seeking understanding and a more equal and free world.”

“In Divide and Ruin, Dan Glazebrook has expertly laid bare the connections between capitalism, militarism and economic crisis today, and the devastating impact Western foreign policy has had on the nations of the global South. Glazebrook demonstrates that, above all, the imperialist countries are determined to combat the ‘threat of a good example’, the possibility that the economic policies pursued by Third World states might be effectively determined by their own citizens in their own interests, and not by Western capitalists and their hangers-on. I highly recommend this book to anyone who is skeptical about the rationales commonly given for today’s wars and who wants to cut through the fog of mass media propaganda.”

Available at LiberationMedia.org and Amazon