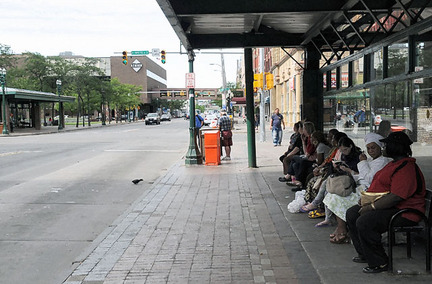 While the current bus hub (pictured) has over 100 places to sit, the new hub will have only 47 seats.

On Aug. 9, Sally Johnston, the President of Disabled in Action of Greater Syracuse sent a warning letter to Centro Executive Director Frank Kobliski, detailing the ways in which the new Transit Hub discriminates against the elderly and people with disabilities. In some instances, the new hub, set to open Sept. 4, is not even in compliance with the Americans with Disabilities Act of 1990. The letter was endorsed by several organizations, including: Syracuse ANSWER, CNY Chapter of the NYCLU and the Syracuse/Onondaga chapter of the NAACP.

Some of the ways that the new Transit Hub is discriminatory include:

The above information is based on a tour of the hub provided to Johnston and other community members. When they voiced some of the above concerns, they were told by a Centro official that people with disabilities can be "trained" on how to find their buses and get around the facility, a severly ableist and condescending statement.

Johnston has given Centro 10 days to respond to the letter and set up a meeting to begin to correct these issues. If Centro fails to respond, DIA will call on the community to mobilize. ANSWER Syracuse stands ready to fight back against Centro for full accessibility for people with disabilities and for the rights of all people to use the new Transit Hub.