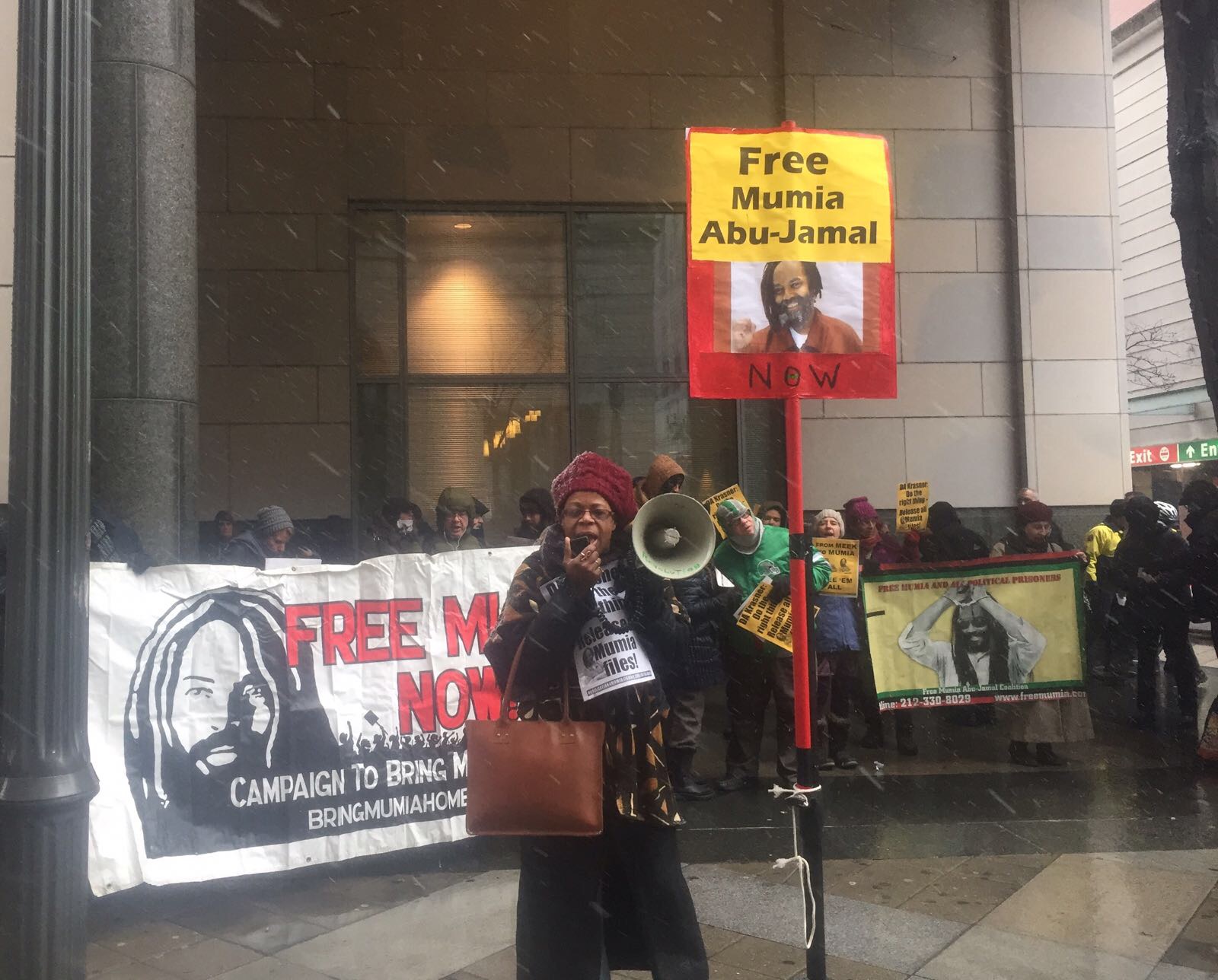 The decades-long struggle to free falsely imprisoned political prisoner Mumia Abu-Jamal took another step forward Jan. 17 as a Philadelphia judge heard the first of a new round of arguments focusing on the corrupt and unconstitutional handling of Mumia’s case by the Philadelphia Police Department and District Attorney’s office.

The hearing today was the outcome of a 2017 decision by Judge Leon Tucker to order the Philadelphia District Attorney’s office to release all files relating to the involvement of Ronald Castile in prosecuting Mumia’s case. Castile presided over Mumia’s original prosecution in 1982 but then, in a practice that has since been ruled unconstitutional by the U.S. Supreme Court in a case known as Williams vs. Pennsylvania, ruled on Mumia’s appeals as Pennsylvania Supreme Court Justice.

The Williams vs. Pennsylvania case resulted in a new series of trials for the defendant, Terrance Williams, because like in Mumia’s case Castile first prosecuted Williams as District Attorney and then ruled on his appeals as Pennsylvania Supreme Court Justice. If Mumia’s legal team can prove Castile’s involvement in Mumia’s prosecution — which, given the prominence of Mumia’s case and the fact that Castile was District Attorney at the time should be simple if the DA’s office releases all the documents relating to Castile’s involvement in the case — Mumia, too, could finally get the fair hearing he was denied in his 1982 frame-up trial.

Mumia’s supporters demonstrated in the snow outside of Philadelphia’s Center for Criminal Justice the morning of the court appearance to raise consciousness about Mumia’s unfair treatment, and to let the state know that they will not rest until Mumia walks free. Demonstrators chanted and passed out flyers outside of the courthouse, and planned to enter the courthouse and pack the courtroom in solidarity with Mumia.

The hearing lasted about an hour, and in an impressive show of solidarity, so many of Mumia’s supporters made it into the courtroom that many had to wait outside. The result of the hearing was a continuance order — the Judge decided that more time was necessary to allow the newly elected administration of District Attorney Larry Krasner to formulate its policy with regard to cases impacted by the Williams decision. Krasner is a long-time movement lawyer who gained prominence defending protesters targeted by authorities for repression. Activists are demanding that Krasner stay true to his progressive record and tell the truth about the framing of Mumia.

The next hearing will be some time in March 2018, and similar support from the movement to free Mumia and to free all political prisoners can be expected.

After the hearing concluded, demonstrators gathered outside the courthouse again and heard from speakers who are deeply involved in the movement to free Mumia, including Ramona Africa — one of the only two survivors of the despicable 1985 bombing of the MOVE organization’s home by the Philadelphia Police Department that resulted in the death of 11 people, including five children, and that burned down an entire city block in a Black neighborhood leaving over 250 people homeless. She told the crowd:

“Mumia is strong, determined, and knows as long as he stays strong, they will not defeat him. Mumia’s life is not in the hands of this system and those running it. Mumia’s life is in our hands, the people’s hands — and we are not going to step back, shut up, bow down, or any of that. We are standing strong with our brother Mumia, and we aren’t going to stop at all until our brother comes home and then the fight doesn’t stop there. Because too many of our freedom fighters are in prison, accused of ridiculous crimes like robbery and murder when it is this system that is guilty of those crimes. They call our MOVE sisters and brothers, they call Mumia, they call Leonard Peltier murderers. This is the government that dropped a bomb and murdered babies and burned babies alive along with men, women, our dogs and cats. So who is the real murderer? But not one of them is sitting in prison next to our sisters and brothers. Not one of them sat on death row next to Mumia for 30 days. So we cannot be tricked by their games, the labels and names that they want to put on the people, our soldiers, our revolutionaries. We know who the real criminals are.”

The United States makes up about 4 percent of the world’s population, but holds 22 percent of the world’s prisoners — a disproportionately large percentage of whom are Black and Latino. The fight to free Mumia is about more than just one man — it is a fight to dismantle once and for all the racist prison and policing system that exists in the United States. This struggle will continue in the streets and the courts until Mumia and all political prisoners are free.