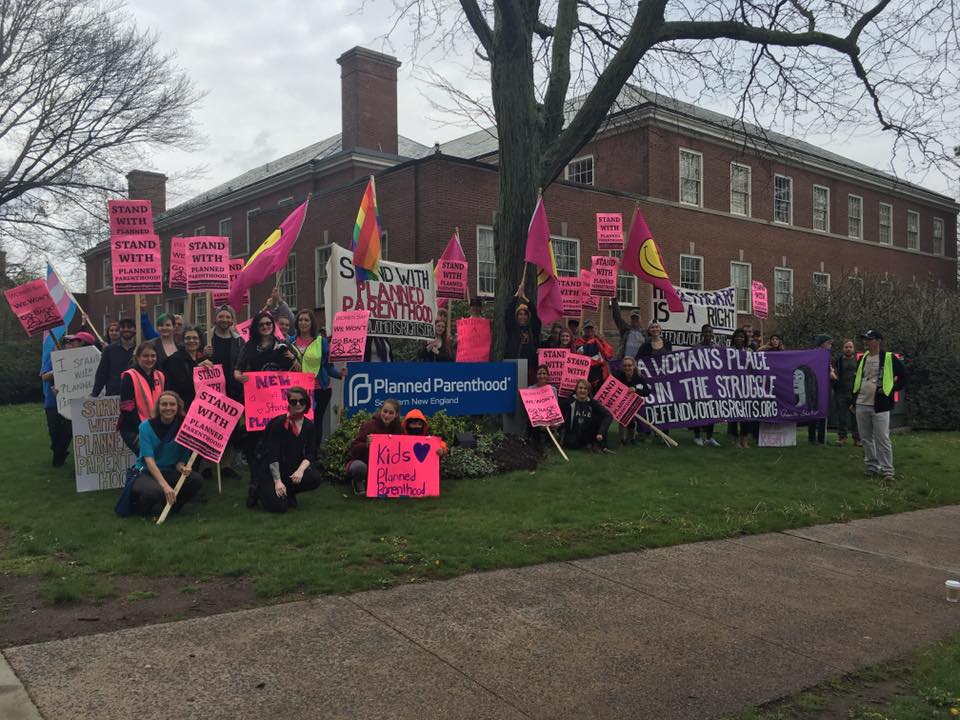 On June 18, a broad coalition from the New Haven, Conn. community, Women Organized to Resist and Defend, NARAL Pro-Choice Connecticut, the Reproductive Justice Action League at Yale, and other groups engaged in a mass action to defend Planned Parenthood from anti-choice bigots.

Since November, WORD and members of the local community have organized mass monthly actions for clinic defense, as well as smaller weekly actions. June’s event, which was intended to honor the LGBTQ community during Pride month, came with particular urgency on the heels of the Orlando massacre. At a time when Planned Parenthood offers increased services for LGBTQ people, it became crucial for the community to have people volunteer to put their bodies between those accessing reproductive healthcare and the bigots trying to shame and intimidate them.

Previous mass clinic defense actions featured a vibrant display along a main road in front of the clinic, which received enormous support from passers by. Clinic supporters also provided safe escort to patients going in who were uncomfortable passing by the crowd of aggressive religious bigots at the entrance.

This action, however, took a more proactive turn. Recent warm weather had brought a larger group of anti-choice bigots, creating a more dangerous situation for LGBTQ youth accessing the clinic. In turn, clinic supporters took over the entrance with bright pink flags, banners and rainbow and trans flags. With no space left to occupy, the bigots were forced across the street, where their harassment was easily avoided.

IV, a trans organizer who helped coordinate the action, said, “This is an enormous victory. After so many years years of these bigots and harassers thinking they have a monopoly on the public sidewalk in front of the clinic in our community, we were finally able to push them out. This was a very emotional experience for many of us, who are both trying to heal from the pain of Orlando and understanding the dire need to stand up and defend ourselves and others from bigots. But I think it was ultimately that intensity, that stark understanding, that helped us push them back. It’s the unpunished, unimpeded ability of people like that to intimidate and harass vulnerable women, young people, trans and queer people, that empowers zealots who take it to the next level. As long as we remain strong as a community and fight back, bigots will think twice before trying to launch an attack on our safety or our access to basic healthcare.”

Recently, members of one of the anti-choice organizations harassing patients surrounded a queer Planned Parenthood worker and hurled homophobic slurs at him, threatening him with violence. Overall, the bigots’ messaging is violently anti-LGBTQ, anti woman and pro-rape. It is no surprise that the community mobilized so readily to oust them.

The ability of the New Haven community to oust the bigots and replace their vitriol with a display of love, solidarity and safety proves one thing—that communities of women, LGBTQ people and supporters of healthcare and choice have the power to mobilize, defend crucial resources and win. Until we have full rights for all people to safely access healthcare without social or financial barriers and full liberation for LGBTQ people, it is up to communities to unite to defend themselves against hate. Together, we can win everywhere in the country.