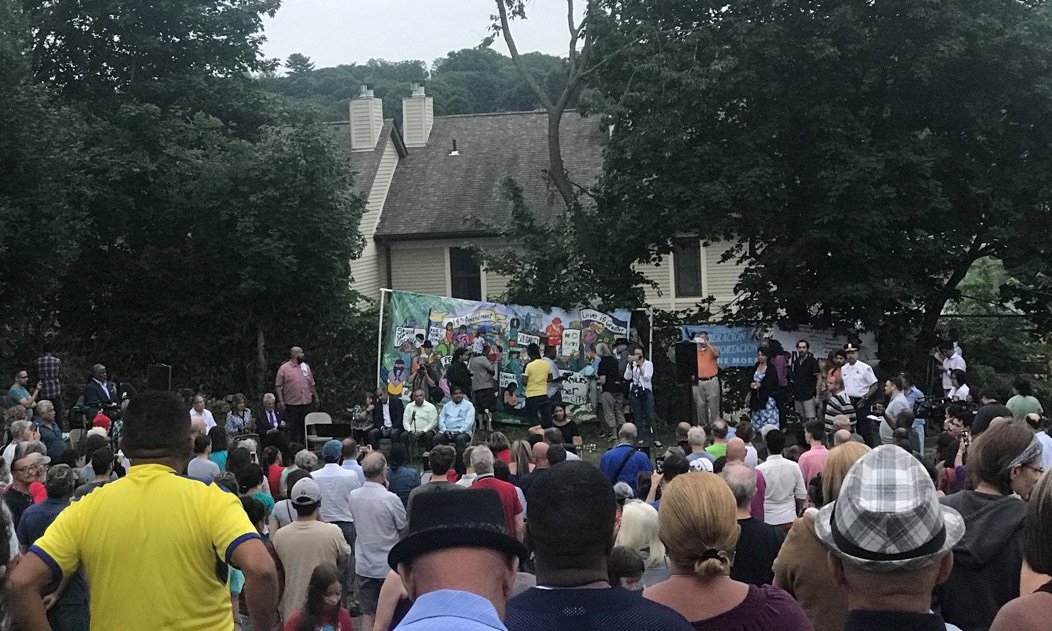 Nury Chavarria was granted an emergency stay of deportation! Community mobilization and direct action work! We are out here at Iglesia de Dios Penetcostal on East Pearl celebrating.

Hundreds of people stood on the lawn of Iglesia de Dios Pentecostal in the New Haven, Conn. neighborhood of Fair Haven on July 23 to support Nury Chavarria and her family in their struggle against ICE and the U.S. government’s deportation machine.

Nury Chavarria sought sanctuary in the church on July 20 instead of boarding a flight to Guatemala as she had been instructed to by ICE. Chavarria has been living in the United States for 24 years, longer than she had lived in Guatemala. She is a single mother of four children. Her youngest daughter Hayley is 9-years old and staying with her at the church. In a press conference the night they arrived at the church, Hayley Chavarria appealed directly to President Donald Trump to keep her mother in the country: “My mother, Nury Chavarria, is someone I love more than anyone in the world. She’s not a criminal, she has a positive attitude about everything. I want her to stay because I love her so much.”

Chavarria has no criminal record, and until now, ICE would annually defer her case. This year, ICE agents during a regular check-in told her she had to leave the United States by July 20 and put an ankle bracelet on her.

Returning to Guatemala would mean returning to a country Chavarria has not seen in over two decades. It would split her family apart and leave her forced to choose between bringing her youngest children to a country they do not know, or leave them in the care of social services. Her oldest child, 21-years old, has cerebral palsy and relies on his mother’s care.

At the July 23 candlelight vigil and rally, speakers from religious groups and community organizations addressed the crowd of over 200 who had come from New Haven and across Connecticut. Chavarria heroically came out of the church to speak to the gathering thanking everyone for their support. ICE has an internal policy of avoiding raids in what they call “sensitive places,” which includes churches, but stepping outside the church just into its parking lot was a risk.

As Chavarria returned to the building, the crowd chanted, “¡Nury! ¡Escucha! ¡Estamos en la lucha!” (“Nury! Listen! We are in the struggle!) to show the unity and solidarity gathered there.

New Haven has a long history of standing up for the rights of immigrants. Organizations like CIRA (Connecticut Immigrant Rights Alliance) and ULA (Unidad Latina en Acción) — which helped find refuge for Nury Chavarria and put on the vigil — organize in the city and across the state. In 2007, New Haven was one of the first cities in the country to adopt a municipal ID card program for all residents of the city regardless of documentation status. The card is a legal form of identification in the city. Two days after the New Haven Board of Aldermen approved the ID card, ICE performed early-morning raids in the city and arrested 31 people, which was met by a mass rally and protest and renewed organizing.

Unfortunately, no city or state government can prevent ICE from coming into a municipality. It is up to organized movements in New Haven and across the country to fight the terror of ICE, to quickly respond to raids and to keep families like Nury Chavarria’s from being split up.