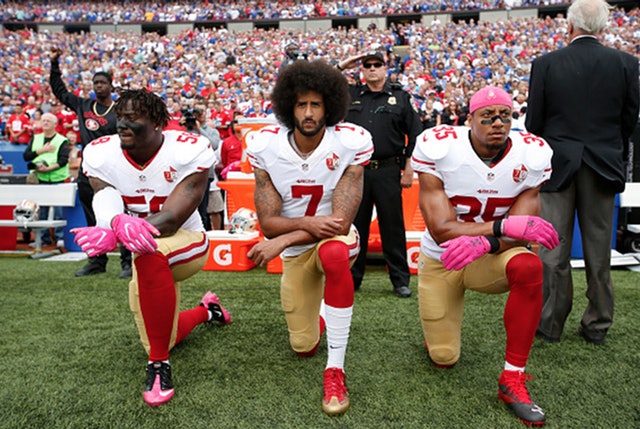 Players in the National Football League and other professional athletes have courageously taken up the fight against racism and police brutality by taking a knee during the singing of the national anthem before games. The ANSWER Coalition is in full solidarity with this ongoing action.

The protests were started by Colin Kaepernick, who was the San Francisco 49ers quarterback, in 2016. Kaepernick explained his action by saying, "I am not going to stand up to show pride in a flag for a country that oppresses Black people and people of color. To me, this is bigger than football and it would be selfish on my part to look the other way." Referring to police killings, he added, "There are bodies in the street and people getting paid leave and getting away with murder."

The protests gained considerable momentum at the beginning of the current NFL season. Donald Trump fiercely and in a clearly racist manner attacked the players who dared to exercise their right to free speech. In a courageous show of defiance, scores of players and professional athletes in other sports decided to join the "take a knee" protests after Trump's comments.

We demand that no retaliatory action be taken against the protesting players. Furthermore, racist killer cops must be held accountable for their crimes and communities should have control over the police that patrol their neighborhoods.