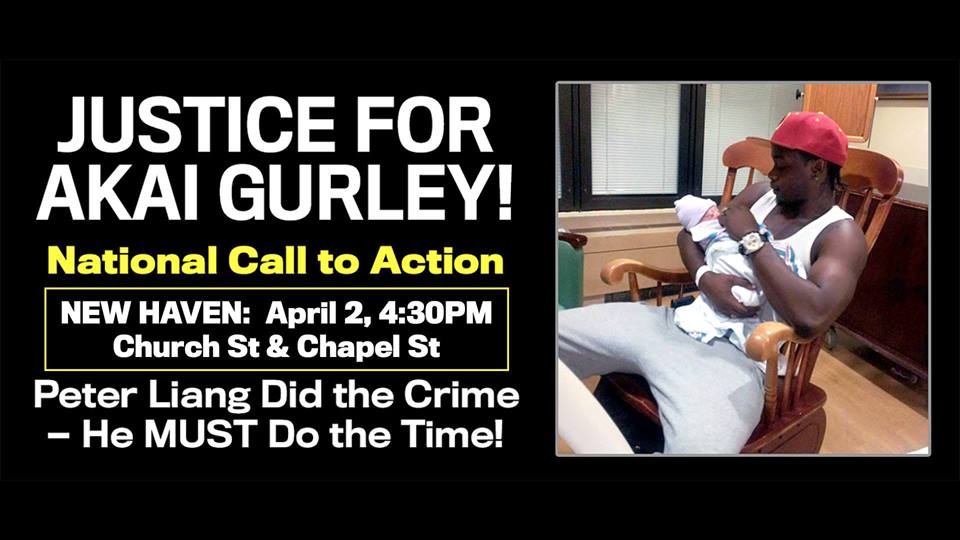 New Haven Rally: Justice for Akai Gurley! Liang Did the Crime - He Must Do The Time!

Liang Did the Crime — He Must Do the Time!

The Justice for Akai Gurley Family Committee and allied groups are calling on anti-racist activists, the Movement for Black Lives and all people of conscience to take part in a National Week of Action, April 1-10. We are asking you to organize events, protests, outreach, street meetings, banner drops, or whatever you can — and on whatever day in that range works best for your city — to show that the whole country is demanding a maximum sentence for former NYPD cop Peter Liang.

Liang is set to be sentenced on April 14 by Judge Danny K. Chun, and if he is able to get off with a light sentence, this will be yet another case of extreme injustice — just a new way of the system saying that Black lives still don’t matter. We cannot sit idly by. Liang was convicted of second-degree manslaughter and official misconduct last month for the November 2014 killing of Akai Gurley in Brooklyn, N.Y. He did the crime, and now he must do the time.

While nothing can bring back Akai, and we in fact wanted him to be tried for murder, this was a significant step towards justice for our family and our movement. Convictions of on-duty cops for their abuse and murder of Black and Latino people are very rare — and we know that this one would not have occurred were it not for the strong national movement that is demanding justice and accountability.

Liang robbed Akai’s daughter, Akaila, of a father, his siblings, a brother and his mother Sylvia, of a son. Akai was a community member, a worker, a part of our hearts and our lives. His life was stolen because Liang was patrolling the stairway of a public housing unit with his gun drawn and his finger on the trigger — against NYPD protocol and completely without reason. Evidence proved that he used over 11 pounds of pressure to pull the trigger — the gun did not simply “go off” as he claimed — and that he then tried to cover his tracks rather than give CPR to Akai as he lay dying. That is why Liang was justly convicted.

The judge is under pressure from various forces to allow Liang off with only community service or probation. Such an outcome would be like killing Akai all over again. No person who is not a cop would get a slap on the wrist for such a crime, and the New York State sentencing guidelines are 7 to 15 years. (The judge is not legally obligated to follow them, however.) We are calling for the maximum sentence.

All the time, our communities are told to “let the criminal justice system work” and wait for abusive cops to “have their day in court.” But now that the system has finally returned a guilty verdict, the pro-police forces are basically calling on the judge to ignore it. What hypocrisy!

Much of the media has been focused on a segment of the Chinese American community that has rallied to callfor leniency for Liang. They argue that Liang was treated and punished differently than white cops who have killed young Black man. Whether or not that is true, our message is that ALL cops, including Liang, must be held accountable. These pro-Liang marches are essentially demanding the "equal right" to be unaccountable for terrible violence, and continue the pattern of injustice. They have used the insulting narrative that Liang is somehow a victim in this case.

We know that these rallies do not speak for their entire Chinese and Asian community. Progressive and genuine anti-racist forces within the Asian American community have been standing by Akai Gurley’s family. They have had our backs in the courtroom, shown solidarity in our protests, and played a vital role in the organizing of this movement. We call on people of all backgrounds, including our Asian brothers and sisters, to continue to join with us and demand justice for Akai Gurley — this movement against racial injustice requires all of us and it requires unity. We will not allow Akai Gurley’s name to be used to promote anti-Asian sentiment or break that unity.

Our long struggle for justice has now entered a critical phase. We need the help of our brothers and sisters across the country. Anything and everything you can do is appreciated. Please let us know by tagging us on social media, and contact your local media, of any activity you have planned. If you have an upcoming protest or meeting around a police brutality struggle in your area, please be sure to raise Akai’s case.

We are also asking everyone to make banners and/or signs that read "[Your CITY NAME] demands Justice for Akai Gurley!" and share your photo.

We will be using the following slogans here:
* Justice for Akai Gurley!
* Liang did the crime -- he must do the time!
* No special treatment for killer cops!
*Hold all cops accountable, including Liang!

Thank you for your support!