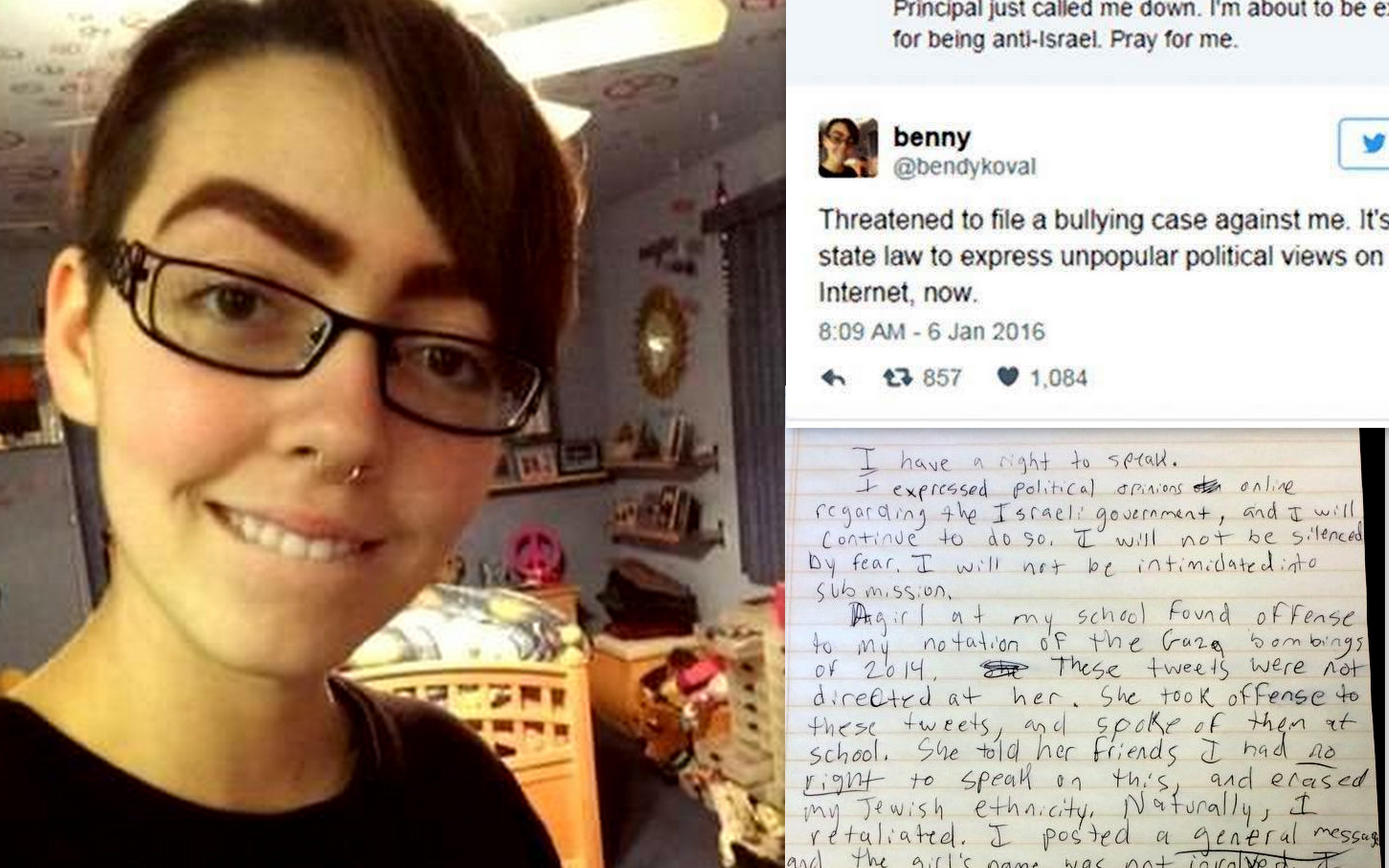 In a state where the governor, Chris Christie, says teachers’ unions deserve a “punch in the face” and openly bullies Arab and Muslim people on a day-to-day basis, a 16-year-old student may face anti-bullying criminal charges for her tweets against Zionism and in support of the Palestinian people.

The Bergen County high school student, Bethany “Benny” Koval, faced down threats and intimidation from school administrators who told her, “You can sit there with your smug attitude right now, but if it’s got to go into a bullying case … you’re going to lose.” Koval, who is Jewish and has family in Israel, recorded the conversations anticipating that her rights were going to be violated.

The school district states that it is investigating Koval for her Dec. 27, 2015 tweets that labeled Israel’s actions against Palestinians as “apartheid” and another tweet in which Koval stated she was happy to be unfollowed by pro-Zionist classmates on the social media platform.

The school administration has a twisted view of the intent of the anti-bullying laws that came about after a Rutgers students committed suicide from ongoing anti-LGBTQ harassment on social media.

“They use ‘bullying’ as a guise to cover their pro-Israel, pro-censorship agenda,” explained Koval.

“But actually I can get in a LOT of trouble with my school for my anti-Israel sentiments on here. A girl I know got in trouble for a [Black Lives Matter] post,” said Koval in one press interview.

Koval’s firm and brave stance in the face of intimidation have won her support across the globe on social media.

She is not, however, seeking credit, as she explained: “I want Palestinians to be the face of the movement. It’s not right when privileged people get credit for what under-privileged people have been saying for a long time.”

To counter the threats of of school administration, Koval’s supporters have commenced a social media campaign #IstandwithBenny to express solidarity with her and oppose those New Jersey that are trying to squash any opposition to racist Zionist ideology.

Attacks against those standing up for justice is starting to become a pattern in New Jersey. Last Spring, Orange, NJ, 3rd grade teacher Marilyn Zuniga was fired when her class decided to send get well cards to ill political prisoner Mumia Abu-Jamal after the class discussed quotes from various individuals on justice during Black History month. Zuniga tweeted about her class’s decision to send cards to Mumia. Zuniga is now suing the Board of Education.