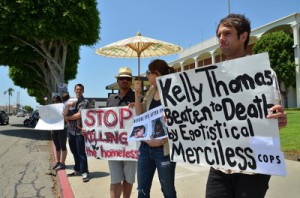 The verdict in the trial of former Fullerton police officers Mark Ramos and Jay Cicinelli was announced on Jan. 13: not guilty on all counts. District Attorney Tony Rackauckas quickly announced afterward that a third indicted officer, Joe Wolfe, would not face trial and that no appeal would be made on the cases of Ramos and Cicinelli, an announcement that illustrated the complicity of the chief prosecutor in Orange County with Fullerton’s killer cops.

Ramos, Cicinelli and Wolfe were only three of the ‘Fullerton 6’ – six officers who beat to death Kelly Thomas, a homeless man with schizophrenia, in July 2011. The incident was captured by nearby surveillance cameras as well as individual cell phone footage, where Thomas can be heard screaming for his father, for help and begging the police to stop their merciless beating. The most galvanizing aspect of the case was a photo released to media taken with a cell phone camera of Thomas’s destroyed face that became an internationally recognized icon of the police brutality faced by the homeless and mentally ill.

This killing sparked a wave of protests in Fullerton, including the shut down of half a dozen city council meetings, the repeated shut down of Fullerton’s major thoroughfares and downtown area with mass marches, the recall of several elected officials, the forced retirement of former police chief Michael Sellers, and eventually the indictment of Ramos, Cicinelli and Wolfe. The following two-and-a-half years were marked by an uphill legal struggle by the Thomas family to obtain evidence for both the criminal and civil trials, and to spread the word far and wide about the injustice faced by their son.

Video and audio evidence showed Ramos telling Thomas, “You see these fists? They’re getting ready to f--- you up,” immediately before the attack. Both the doctor that treated Thomas for five days as he lay in a coma and the coroner agreed that he died due to lack of oxygen caused by chest compression and blunt force trauma to the head. Both his body and face were crushed under the blows of the Fullerton 6, with the death blow delivered by Cicinelli, who was recorded bragging, “I f---ing beat him probably 20 times with my taser.”

Thomas can be heard screaming for his father and for help more than 36 times and at least half a dozen times crying out that he was unable to breathe, which the Fullerton 6 ignored as they continued to beat him.

Despite all of this, the defense attorney, John Barnett, put Kelly Thomas on trial for his own murder. This should come as no surprise, since Barnett had used the same tactic in 1992 to help get LAPD officers off the hook for the Rodney King beating.

Barnett attempted to frame Thomas as a violent and uncontrollable threat to public safety. He claimed that he had ‘abnormal strength’ while simultaneously claiming that his death was related to a weak, enlarged heart due to methamphetamine use. Barnett even went so far as to present alleged “expert” witness testimony where a doctor claimed that a “spontaneous psychotic episode” had been triggered in Thomas by meth use immediately before the encounter despite the fact that he did not test positive for drugs in the autopsy. Barnett further demonized the victim for previous incidents of violence against his grandfather and his mother—both of which occurred when he was younger and struggling with his schizophrenia.

Barnett’s overall strategy was not to claim that the actions of Ramos and Cicinelli were just, but simply to claim that Thomas’s life was inconsequential, or worse, that he needed to be ‘put down’ like an unwanted animal.

The legacy of the "Invisible Empire"

It is not entirely shocking that a carefully selected jury in Orange County would ignore every piece of irrefutable evidence before them and find Ramos and Cicinelli “not guilty” on all counts, especially in a city with a history of outright fascists seizing control of the main institutions of local government.

The man who founded "the OC" by seceding from Los Angeles County, Henry William Head, was a veteran of the Confederacy and a high ranking Klan member under the direct supervision of Nathan Bedford Forrest, the founder of the Klan. By the early 1920s, the Klan had seized control of local political authority in Fullerton, Anaheim, Brea, Huntington Beach, Seal Beach and other large sections of the county.

One of the first district attorneys, Horace Head, Henry’s son, was also affiliated with the Klan. At least one high-ranking judge, the chair of the central committee of the Republican Party in Orange County, the first police deputy of Fullerton, the first police chief of Brea and several mayors were in the Klan. Anaheim remains the site of one of the largest Klan rallies in history—when over 30,000 Klan members and their supporters filled a park in the city.

Over time, as the Klan fell out of fashion, its supporters and members remained in Orange County, hidden from plain view, but the ideology of a white, Protestant, “law-abiding”  community remained a pervasive influence. This ideological underpinning was bolstered in the 1950s, during the ‘White Flight’ movement, when entire predominantly white communities in south Los Angeles from Inglewood to Compton were ‘evacuated’ as Black workers moved to the area to find jobs and freedom from Southern discrimination. These communities largely fled to nearby Orange County and remain there to this day.

The pervasiveness of fascist and far-right ideas in the area have bridged into uncritical support of the police who are viewed as the protectors of an Orange County purified of the unwanted elements of nearby Los Angeles county—people of color, drugs, crime, homeless, radicals, LGBTQ and poor people—a purification that was central in the original fight to secede. Residents of Orange Country who do not fit this mold are subject to extreme oppression.   When Barnett pegged Thomas as a violent drug addict he was betting, quite correctly, on the underlying political sentiment of an area dominated by far-right ideology.

Are the police and courts legitimate protectors of justice?

The killing of Kelly Thomas by the Fullerton 6 is proof that the police do not serve or protect the people. A service to a homeless man with schizophrenia would be to assist him in obtaining necessary mental health treatment when suffering from a psychotic episode. Not only was this not the approach taken by Ramos, but evidence was presented at trial that showed that Ramos had frequent encounters with Thomas, each time for the purpose of kicking him out of some public space. Beating a frail and unarmed homeless man to death did nothing to protect people.

The decision of the court has been rejected by people around the country and the world as a great injustice. The vast majority of people presented with the facts and video evidence feel that the officers are guilty. The trial illustrates that no court will work on its own in favor of poor and working people if it means admitting that the police and the laws they enforce are not in the people’s interest.

The unjust outcome of the court has set a dangerous precedent, where even blatant video evidence presented in a trial of killer cops is no longer a guarantee of even one day in prison. But this precedent has made it evident that the masses of people must organize for a new kind of power—a people’s power—capable of guaranteeing justice even when the courts act against the people.

A demonstration of over 200 people in Fullerton marked the night of the verdict, and demonstrations in Oakland and Los Angeles are took place the following day. More demonstrations are planned throughout the state of California. These demonstrations will bring us one step closer to building new sources of people’s power that, in the long run, will win justice for Kelly Thomas and all victims of police violence regardless of the court’s decision.