National Protests on the 16th Anniversary of the Afghanistan War

The ANSWER Coalition is part of the following call to action to organize nationwide demonstrations to demand an end to the U.S. war on Afghanistan on its 16th anniversary, and encourages people to attend any events in their area. 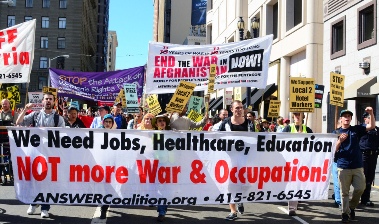 October 6, 2017, marks the 16th anniversary of the U.S. invasion of Afghanistan – the longest foreign war in U.S. history.

The Afghan war, which has been a thoroughly bipartisan effort, was originally railed against by Donald Trump when he was running for president. He claimed to be against U.S. troop involvement in Afghanistan. Now he is moving forward with a “secret” plan of escalation that will also include Pakistan. He says the secrecy is to keep the “enemy” from knowing his plans, but it also keeps the U.S. people from knowing what he is doing in our name and from judging the human costs for the people of Afghanistan, Pakistan and the United States

What we do know is that military escalation has repeatedly failed to bring peace in Afghanistan. It has caused more destruction and more deaths of civilians and soldiers alike and has cost trillions of dollars that could be spent on meeting basic needs here at home while repairing the destruction we have carried out abroad.

Trump also emboldens the war machine here in the US against Black and Brown people and immigrants by fanning white supremacy and xenophobia and continuing the militarization of the police and ICE to incite racially-motivated violence and justify repression, including mass incarceration and mass deportations. US wars of aggression and militarism abroad go hand-in-hand with increased state repression and militarization of the police state here at home.

Trump’s new escalation comes at a time when there is no end in sight to the continuous wars, including drone and mercenary warfare, throughout the region and when he is threatening military action against Venezuela, North Korea, Russia, Iran and other countries.

Therefore, we the undersigned antiwar leaders in the U.S. are calling for non-violent protests in cities across the country during the week of the 16th anniversary of the U.S. invasion of Afghanistan. We appeal to all antiwar organizations in the United States and around the world to join us.

(organizations are listed for identification purposes only)