Join or organize a solidarity action in your city 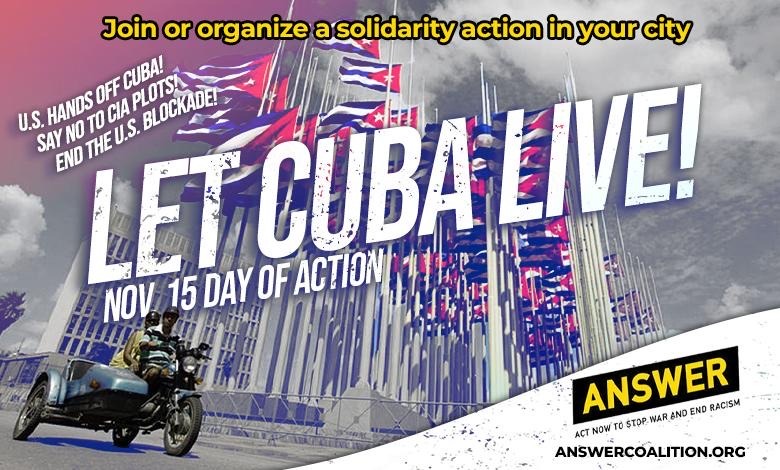 Register a solidarity event in your city here

Donald Trump imposed 243 additional coercive measures aimed at tightening the U.S. economic blockade against Cuba. Increased economic suffering for ordinary Cubans is the consequence of this policy. President Biden has not lifted even one of the additional sanctions imposed by Trump. Instead of treating Cuba as a neighbor and resuming the process towards normalization between U.S. and Cuba, the Biden White House is working overtime to promote a counterrevolution inside of Cuba.

The State Department, the CIA, the National Endowment for Democracy (NED) and other U.S. agencies are working to organize anti-government protests in Cuba on Monday, November 15.

The organizers of the November 15 demonstrators are the same players who led violent attacks on people and public facilities on July 11. One such person, Yunior García Aguilera, has been exposed in recent weeks as having direct links with notorious Miami-based terrorist Ramón Saúl Sánchez, and CIA plots to try to create conflict within Cuba.

The Cuban government has made it clear that it will take measures to defend Cuba from the CIA sponsored destabilization campaign. Let us never forget that the U.S. used similar tactics to overthrow the Iranian government in 1953, the Guatemalan government in 1954, the socialist government of Salvador Allende in Chile in 1973.

The ANSWER Coalition is calling on people to show their support for the right of Cuba to retain its sovereignty and freedom from imperialist efforts to overthrow the government.

In July 2021, the ANSWER Coalition joined with others to place a full page ad in the New York Times under the headline LET CUBA LIVE!

The U.S. blockade against Cuba must be ended. Cuba has led the way in providing free healthcare for its own citizens and poor people around the world. The U.S. has been at war against this revolution ever since it succeeded in toppling the U.S. backed dictatorship of Batista in 1959. What the U.S. fears is that if Cuba is allowed to live free from outside interference, it will be an example for the rest of Latin America that has suffered for centuries under the boot of colonialism and imperialism.

If you have information about an action in your area, or if you are planning an action, please let us know by clicking here.