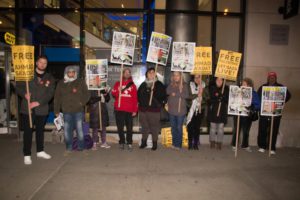 Activists lined the sidewalk outside of the Union Square Best Buy in New York City. It was one of many coordinated actions around the world calling for the release of Palestinian political prisoner Ahmad Sa’adat and a boycott of Hewlett-Packard products. The demonstrators held signs, chanted pro-Palestine slogans, and handed out flyers to people passing by explaining Sa’adat's imprisonment and the business relationship between Hewlett-Packard and the state of Israel.

“Samidoun: Palestinian Prisoner Solidarity Network is an international collective working to free Palestinians imprisoned for their struggle against Zionist settler-colonialism. We organize and support activities in solidarity with Palestinian political prisoners and the prisoners’ movement, and also distribute news on political detentions and the fight inside the prisons,” explained Joe Catron, a Samidoun organizer. The group has held events in New York City nearly every week since 2015.

Actions were organized around the world in conjunction with this event, spanning across the United States and in countries such as the UK, Ireland, Belgium, Germany, Italy, Turkey, France, Denmark, Lebanon and Palestine. On Monday, there was a rally held in the Gaza strip to top off a weekend full of actions.

ANSWER organizer Rachel Silang spoke with Liberation News outside the Best Buy electronics store about the importance of these actions in the United States.

“The struggle for Palestine relates to struggles in the U.S. today including the #NoDapl movement, Black Lives Matter and more. People from around the world are realizing how much we have in common and we all need to come together to take a stand against war and racism” explained Silang.

Generally public reception was positive. Most people Liberation spoke with feel that public opinion on the Israel-Palestine situation is becoming much more sympathetic to the Palestinian struggle. Samidoun organizer Michela Martinazzi said, “I think public opinion is slowly becoming anti-war and anti-intervention. More and more people are beginning to understand that when the U.S. supports a foreign power there must be an ulterior motive.”