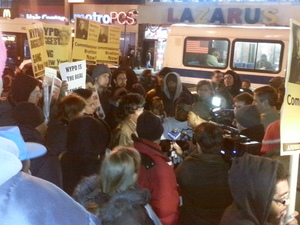 Outraged by newly elected Mayor Bill DeBlasio’s appointment of William Bratton as the new Police Commissioner of New York City, community organizers gathered to rally in front of the State Building in Harlem on Dec. 27 to demand his removal from this position. William Bratton is the architect of the racist "stop and frisk" policy implemented by former Police Commissioner Ray Kelly. Throughout his campaign, Mayor DeBlasio, a Democrat, made opposition to stop and frisk a central part of his platform and promised to put an end to the policy.

Parents and victims of police brutality from the October 22nd Coalition called for this rally just a few days before DeBlasio’s inauguration to make it be clear that while many from oppressed communities voted for the new mayor they do not support his choice of Bratton.

Stop Stop and Frisk organizer Jose La Salle stated: “[Police brutality] does not just involve the families that have lost their children, but it involves all the families who have had their children and loved ones criminalized, marginalized and  traumatized  by the actions of police within our communities. … we will not let these injustices continue.” ANSWER Coalition organizer Kerbie Joseph emphasized the importance of building a fight back movement and the collective strength of the community when organized.

Protesters attending the rally chanted “Hey Hey, ho ho, Bill Bratton has got to go!” as they marched through Harlem and headed toward the Bronx.