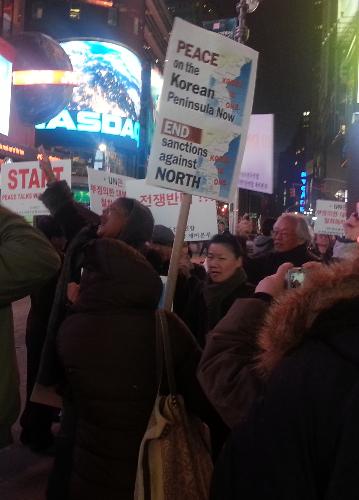 On March 19, a group of protesters gathered in front the U.S. Army Recruiting Station located in Times Square in Midtown Manhattan to demand an end to the provocative simulated military exercises being held by the United States and South Korean militaries off the shores of the Jeju Naval Base.

The “Key Resolve” and “Foal Eagle” war games currently taking place until the end of April are intended as a threat to the Democratic People’s Republic of Korea, also known as the DPRK or North Korea, as these so-called “war games” enact the invasion and overthrow of the North Korean government. The exercises involve tens of thousands of U.S. troops stationed in South Korea and deployed from the United States along with hundreds of thousands of South Korean troops.

Organizers of the action expressed their concern about the increasing the military tension between the United States and North Korea, and called for “No new Korean War.” Protesters chanted “End the War Games – Peace Talks Now” and “No More Sanctions” in response to the United Nations sanctions imposed on North Korea.

The event also called for the establishment of a peace treaty formally ending the Korean War. While an armistice was signed in July 1953, the United States has refused the demands of North Korea to sign a Peace Treaty formally bringing the war to an end.

The ANSWER Coalition and other progressive organizations participated in the action, which was organized by the Working Group for Peace and Demilitarization in Asia and the Pacific.