Protesters rally in solidarity with Oaxaca 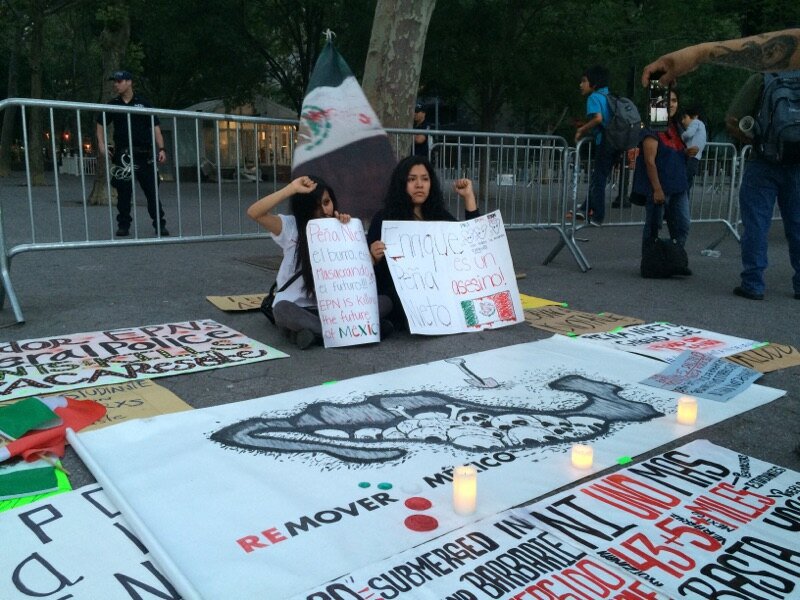 This article is based on speeches by Araceli Patricia Cruz and Karina Garcia at the New York City Rally in Solidarity with Oaxaca on June 20 in Times Square.

Araceli Patricia Cruz: There is major state repression in Oaxaca, Mexico. I am here to represent the people of Oaxaca. I want my people and our comrades to know that we hear them and we hear their cry for help. You are not alone.

My uncle has been in the streets protesting alongside his wife, who is a teacher in Oaxaca. He takes care of his children while my aunt is teaching. He hits the streets of Nochixtlan after she comes home. I spoke him with yesterday and he’s safe but, things are getting worse. My family has had to receive and care for the bodies of the dead.

As an Indigenous woman, Mixteca, Oaxaqueña, and Mexican American, I believe in social equality, humanity, social justice, free education and resistance. Oaxaca has a large population of Indigenous people who suffer from poverty, violence, land monopolization and poor education. Most Oaxaqueños still speak their Indigenous languages—Mixteco and Zapotec.

Why does Enrique Peña Nieto continue to target the Indigenous population? He’s one prime example of what a privileged, light-skinned, elite bourgeois, Mexican man in power represents. He is divorced from our reality. The dictator, Peña Nieto declared that the hospitals will only receive injured civilians who can prove they were not protesters.

Maestros are fighting against neoliberal education reform that will affect the Indigenous community especially. The Mexican state wants to implement heavy-handed teacher evaluations that strip even more autonomy away from the teachers.

For many Americans, Oaxaca is little more than a tourist attraction. But, where are the tourists now when Oaxaca is experiencing a massacre? The CNTE, the Teachers’ Union, has reported that 12 people have been killed since June 19, 2016. Teachers, professors, students, activists and Indigenous families from Oaxaca were massacred on this past Father’s Day weekend by the Mexican Government, military & police.

Without our teachers there would be no education for our brothers and sisters—future students, teachers, doctors etc. The government has called for a blackout from all internet access deleting all photos, videos and live streaming of what’s occurring in Oaxaca now. We say No! We will not let our people down especially in this time when Oaxaca esta en Resistencia! Nosotros tambien estamos en Resistencia.

Karina Garcia: We are here today because we stand with the people of Mexico. I know what the teachers in Mexico are going through right now. Twelve people have already been killed. Dozens more have been hurt.

Why are they being attacked?

And I know as a public school teacher, the struggles my students are facing—poverty, homelessness and all of the different problems.

And here in the richest city in the world, we see our people are hungry and oppressed.

The same kind of neoliberal reforms they are trying to implement in Mexico hurt our children right here in this country as well.

But teachers here in the United States and in Mexico are not going to sit by as they take away our kids’ futures. We are going to fight. That is why we are here today—to stand for justice and for the dignity and the future of our families and communities.

We know that we have more in common with the Mexican teachers than with the politicians who scapegoat them.

We know that we have more in common with the immigrants in this country than the politicians who scapegoat them.

We have more in common with poor and working class people fighting all over the country and the world for freedom than with bourgeois politicians who want to take away our land, our education and our futures.

That is why we are here today!