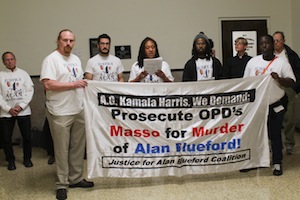 In early October 2012, the office of Nancy O'Malley, district attorney of Alameda County, issued a seven-line note to Oakland police chief Howard Jordan. The note referred to a report issued by O'Malley's office called, “Investigation of the Shooting Death of Alan Blueford.” Blueford was an 18-year-old African American man killed on May 6, 2012, by Miguel Masso, an Oakland cop with a history of racist violence.

The note reads: “I have reviewed the report and agree with the conclusion that the evidence does not justify criminal charges against Oakland Police Officer Masso. As indicated in the report, no further action will be taken in this case.”

Alan's parents, Jarrelynn and Adam Blueford, and the Justice 4 Alan Blueford Coalition (JAB), the anti-police brutality organization they lead, quickly challenged the validity of O'Malley's “Investigation.” They pointed out that the report did not take into consideration the testimony of 12 witnesses who disputed Masso's claim that Blueford was pointing a gun at him.

Rather, the report seemed to start with the presumption that Masso's claims must be true and then cherry-picked evidence that would seem to back up the cop's narrative. The coalition also pointed out that the report from O'Malley's office ignored the fact that Blueford, who was stopped for no other reason than being a young Black male on the street, had his constitutional right under the Equal Protection clause violated.

O'Malley's failure to hold Masso accountable is no surprise. No Oakland police officer has ever been convicted of a crime, even though the OPD remains one of the most notoriously racist, violent and corrupt police forces in the country. In 2000, O'Malley waited to charge even Clarence Mabang, Jude Siapno, Matthew Hornung and Frank Vazquez, a trio of cops who were proven to use beatings, false arrests and planted evidence to terrorize an African American neighborhood, after they had successfully fled to Mexico. They were cleared by an all-white jury later that year. Many of O'Malley's relatives are cops, and her father was DA of Contra Costa County.

On March 5, JAB organized a rally at the Alameda County district attorney's office. Jerrelynn MC'd an event outside the building joined by over 100 supporters.

Meanwhile, a group of JAB activists, including two Party for Socialism and Liberation members, entered the court house and walked into O'Malley's office for a sit-in. They read off JAB's demands, including an independent investigation of the shooting of Blueford by California Attorney General Kamala Harris, the charging of Masso with Blueford's murder, the reopening of all officer-involved killings since the Riders case, and the development and implementation of a strategy to end the criminalization of people of color in the city of Oakland. (The Riders were a group of four cops charged with corruption based on a whistleblower's tip to superiors that they were planting drugs on suspects and roughing them up on the night shift.)

The sheriffs picked up every member of the group, applied stress positions, and dragged them out of the DA's office, a supposedly public space.

When members of the Alameda Sheriff's Department arrived and ordered the JAB occupiers to leave the building, the protesters said that they would not leave and were prepared to be arrested. The sheriffs replied that they had no intention of arresting the protesters. Instead, the sheriffs picked up every member of the group, applied stress positions, and dragged them out of the DA's office, a supposedly public space. The JAB activists, who included the elderly and handicapped, were pushed down a flight of stairs by the battalion of sheriffs and thrown out a door. The public building was then locked, with about 10 sheriffs guarding the entrance.

The crowd around Jerrelynn Blueford immediately ran up to the entrance to help defend their comrades. JAB members pushed the sound system, which was provided by the ANSWER Coalition (Act Now to Stop War and End Racism), up a handicapped entrance ramp so that Jerrelynn could address the sheriffs directly. For two hours, supporters of the Bluefords told their stories of being racially profiled and brutalized, and of losing family and friends to police killings. Activists came from as far away as Baltimore and New York City to stand with the Blueford family. At the closing of the rally, Jerralynn said that if Kamala Harris did not agree to do her own investigation into Alan's death, her office would be the next to hear from the voices of the people.

The rally could not have been a better-timed expression against the epidemic of police killings in the Bay Area. In a 27-hour period between March 2 and 3, there were four unrelated deaths at the hands of cops. Three of the four cases are startlingly similar to that of Alan Blueford and countless other victims of police violence—the victims fled from the police and were subsequently shot. The cops then claimed to have believed the victims possessed guns.

The fourth killing was of a person who even the police acknowledge was not wanted for any crime. Arthur Pakman was giving his friend Shawn Stoddard-Nunez a ride to another friend's house when Hayward cops pulled Pakman over for allegedly speeding. Pakman drove away from the cop, who then shot at the vehicle, hitting and killing Stoddard-Nunez. Pakman then crashed his car and was arrested.

Outrageously, the Hayward cops are charging Pakman with Stoddard-Nunez's murder. “[Pakman] is the cause of the officer's actions. Had that not gone down, then the officer would not have had to shoot,” said Hayward police sergeant Eric Krimm. "Our policy does not prohibit shooting at a vehicle. In any shooting, officers have to consider and be aware of their backdrop and the potential injury to people who are not the intended target. It's tragic that he was shot in this incident because there was no intent to harm him," Krimm continued. "At this point in the investigation, we have not found anything that we would have arrested him for."