Obama, Israel and the new phase of the war on Syria 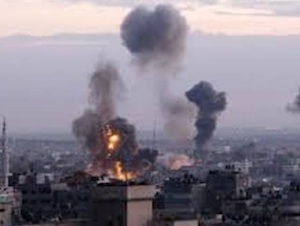 The massive Israeli air strikes on May 5 near Damascus mark a new phase in the imperialist-led campaign to overthrow the Syrian government. Huge bombs lit the early morning sky and shook the ground in the country’s capital. Secondary explosions continued for four hours afterwards. It was the third Israeli bombing attack this year, the second in two days, and by far the largest thus far.

Later the same day, a U.N. commission revealed “strong, concrete suspicions” that the opposition military forces—and not the government—were responsible for the use of sarin nerve gas in Syria. The commission directly contradicted U.S. and British allegations, which the Syrian government has always denied.

Israel’s attack was in “closest coordination” with the Obama administration, according to a White House spokesperson. It is the latest act in a long history of Israel acting as an extension of U.S. military power, carrying out missions that Washington finds “inconvenient” to perform itself at a given time.

The latest raids and the fact that no Israeli planes were reported shot down could be a factor leading to a major air war.

Senator John McCain, an especially rabid supporter of a new U.S. war in Syria, responded by saying that “the Israelis seem to be able to penetrate it [Syrian air defenses] fairly easily.” He called for the U.S. to destroy Syrian air defenses “with cruise missiles; cratering their runways, where all of these supplies, by the way, from Iran and Russia are coming in by air.”

McCain is also a leading advocate of a “no-fly zone” (“no-fly" for Syrian aircraft only, that is) over large parts of the country, which could only be accomplished by first destroying Syria’s air forces and defenses. This initiative is clearly advancing in Washington.

The Syrian government called the Israeli attacks, “acts of war” and “flagrant violations of international law,” and stated that they confirmed the complicity of the U.S. and Israel governments with the armed opposition.

On the other side, the New York Times (May 5, 2013) reported: “The rebels’ Damascus Military Council quickly sought to capitalize on the blasts. The council issued a statement calling on all fighters in the area to work together, put aside rivalries and mount focused attacks on government forces that have so far kept a solid hold on the capital.”

The National Coalition of Opposition and Revolutionary Forces, considered the main umbrella group, blamed the Syrian government itself for the attacks in a convoluted statement, which read:

“Israel’s actions, including the pre-emptive attacks to weaken Syrian defenses, demonstrate a fear of losing the years of peace that the Assad regime provided for Israel.”

How Israel factors into US considerations

While the corporate media portrayed the latest strikes as being aimed at preventing Iranian missiles from reaching the Lebanese resistance organization Hezbollah, the fact that there were multiple explosions at numerous locations, points toward wider strategic objectives.

If Syria retaliates for this latest in series of Israeli air raids, Israel could then act to destroy the Syria air force, a goal openly discussed in Washington in recent days. Thanks in large part to hundreds of billions in U.S. assistance Israel is the leading military power in the region—apart from the U.S. government itself—and has air superiority over other countries in the region.

If, on the other hand, Syria does not respond to the attacks, the government could be made to appear weak, unable to defend the country.

The escalation of imperialist intervention in the Syrian war is being accelerated now due to losses suffered by the splintered opposition forces in recent weeks. And it’s not as if the “Free Syrian Army,” the “Supreme Military Command,” the “National Coalition of Syrian Opposition and Revolutionary Forces,” the “Jabhat al-Nusra,” and other opposition groups have not already been receiving massive support from the United States, Britain, France, Turkey, Saudi Arabia, Qatar and more.

The U.S. and its allies have been funneling vast quantities of arms, money and supplies to the opposition, and training thousands of anti-government fighters in Turkey, Jordan and elsewhere. Harsh economic sanctions have been imposed Syria.

Outside support has sustained the opposition, but not brought it closer to victory. Thus the repeated and urgent appeals by opposition leaders for an imperialist air war against their own country.

Just as in case of Libya, some on the left here, even some who call themselves “socialist,” have taken the absurdly contradictory position of supporting the “revolution” in Syria, while opposing the “foreign intervention” that the leaders of the “revolution” are demanding, and without which they cannot hope to win.

The upheaval in Syria that began more than two years ago was fueled by a wide range of grievances, some legitimate, some reactionary. But the armed rebellion inside the country today is inextricably bound to imperialism and the most reactionary regimes in the Arab world.

The Israeli air strikes follow a week of escalating war rhetoric from the White House and Congress. Now is the time for the anti-war movement, the people’s movement and all those who stand for justice to reject the war propaganda emanating from Washington, and stand together to say: “No New War Against Syria—U.S. Out of the Middle East!”