Obama's speech on Ukraine and Crimea: An exercise in demagogy 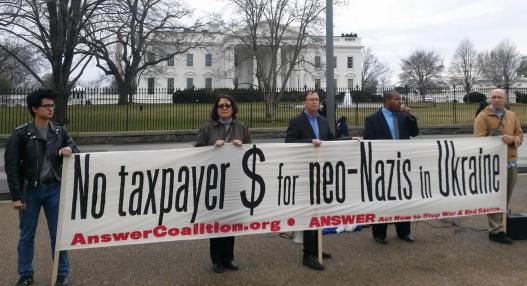 The following is a reprint of a transcript of Brian Becker, National Coordinator of the ANSWER Coalition, speaking to RT about the hypocrisy of U.S. rhetoric directed toward the crisis in Ukraine.

Justifying the US criminal and bloody invasion of Iraq and presenting Crimea’s popular referendum as a blatant act of aggression by Russia is an outlandish example of President Obama’s demagogy, Brian Becker from the ANSWER coalition told RT. The following is a transcript from that interview.

RT: What do you make of Obama's words and his tone when addressing Ukraine and relations with Russia?

Brian Becker: I think his speech was largely disingenuous. He says that the 21st century is the century where borders will not be redrawn by force. The year before the 21st century started in 1999, the US led NATO and dropped 23,000 bombs on Serbia to pry loose Kosovo and have that country become an occupied country as a precursor for independence and then integration into the Western sphere of influence.

Obama also compared Crimea, and Russian activity in Crimea in supporting the referendum or having its own troops there, and said it was a far greater evil than what happened in Iraq. Even though he said he opposed the Iraq War.. Well, almost 1 million Iraqis died. Their country was ripped apart. Five million were left refugees. Five thousand US soldiers died. How can you possibly say well “Oh, I disagreed with the Iraq War but it is not nearly as criminal in terms of its activity as Russia has done.”

It is a disingenuous speech. I think it was largely done for domestic consumption. It is really to answer some of his critics here at home, who are even further to the right than Obama, demanding a return to the real Cold War that existed between the US and the Soviet Union.

RT: When condemning Russia's reunification with Crimea, Obama mentioned US experience in Iraq by saying: “We did not claim or annex Iraq’s territory. We did not grab its resources for our own gain. Instead, we ended our war and left Iraq to its people in a fully sovereign Iraqi state that can make decisions about its own future.”

So there was no military operation in Crimea, yet judging by what we just heard, Obama apparently finds US actions in Iraq more justifiable... Would you say that's the case?

BB: I consider what President Obama said about Iraq and comparing it to Crimea to be just so outlandish it should be rejected as the worse kind of demagogy by the American people. Why did the US go into a war with Iraq? Iraq was at peace with the US. It was not threatening the US. The US created lies, pretext and rationale and then began a unilateral bombing of a country.

And as I said, by the UN's own statistics 1 million of Iraqis are dead, 5 million were made into refugees and president Obama oversaw that occupation for 3 long years in which thousands more Iraqis died, between 2009 and when he withdrew in 2011.

The reasons why the US has finally left Iraq, is it was essentially defeated by the arms resistance forces and because the American people were telling the President, as they told Bush, that they were sick and tired and wanted the American troops out of Iraq.

It is just completely hypocritical for him to somehow say that because the US did not annex Iraq, did not do what it did in Hawaii in 1893 that somehow it is a more benign activity than what has just happened in Crimea, where there was a popular referendum. There was no bombs falling, there was no drama, there was no chaos, no millions of refugees. The people clearly supported a federation with Russia. The US might not like it but to compare that to Iraq is just criminal, I think.

RT: Pressing on with condemnation of Russia, Obama said: “And once again, we are confronted with the belief among some that bigger nations can bully smaller ones to get their way.” Any double standards there?

BB: The last 65 years of US foreign policy has been based purely on bullying: “You either do what we say, or we'll use proxy forces to invade or occupy your country.” They invaded Panama, they invaded Vietnam, Korea, Somalia on a humanitarian basis. They bombed Yugoslavia. They went to war against –they meaning the US government – went to war again in Iraq, they invaded Afghanistan.

It is just a record of one war after another and the use of economic sanctions to bully more vulnerable and weaker economies.

And then for the US to say: ‘But it is Russia that is the bully’… You just have to be in a very, very friendly audience, because you are expecting that no one is going to ask you a real question, because any real question would tear that apart.

RT: The US leader was also talked about people's right to decide how to live and who to be ruled by – why is he depriving the people of Crimea those rights then?

BB: The narrative here is that the people in Crimea have no voice, that this was just a great power show of force by the Russian government. Of course the Russian government does have its own national interests. Crimea was historically a part of Russia, for hundreds of years. The Black Sea Fleet is there. It was part of the Soviet Union and part of Russia until it was administratively transferred in 1954.

But the US wants to create a false narrative as if this was just a blatant act of aggression by Russia.

The real thing that tipped the balance as far as I'm concerned is when the US and Western powers negated the February 21 agreement, which Russia was willing to do. In other words, they would have an elected government remain in office in Kiev, that there would be early elections, the diminution of presidential power.

But that agreement – that the US and the EU helped engineer – was scrapped and they let the fascist takeover of Kiev. And then the US is ‘surprised and shocked’ that Russia would react, that the people of Crimea would react, the people in Ukraine would react? Of course they would react. The US should have seen that coming.