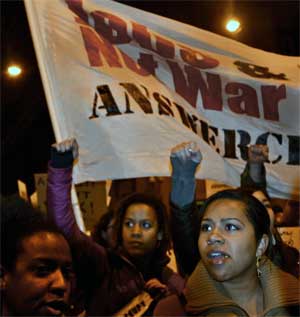 The international uprising against Wall Street has made its first definitive statement in Chicago. On October 15, the city was the scene of a big Occupy Wall Street march and rally of 5,000 people, who took to the streets with chants of “People over Profits! Occupy Chicago!”

Organized just two days in advance, the turnout is a reflection of the widespread support for the movement against the 1% that controls the majority of the wealth. Most of the protesters were young and attending their first mass march.

Along the march, chants were led by young people from oppressed communities. Popular chants were, “How we going to get our jobs back? Tax, Tax, Tax the Rich!”, “We are the 99 Percent!” and “Power to the People!” ANSWER Chicago carried a large banner that read, “Jobs and Justice, Not War and Racism!”

The march ended with a rally at Congress Plaza in Grant Park, where Occupy Chicago volunteers set up two dozen tents in order occupy the plaza.

At 1 am in the evening, in a blatant attack on both the right to free speech and the right to assemble, the Chicago Police Department threatened and then surrounded protesters, forcibly shut down Occupy Chicago’s camp and arrested 250 people.

According to the Chicago Tribune, Mayor Rahm Emanuel was monitoring and in contact with officers during the entire police action. It is inconceivable that he did not give the thumbs up to the repression of the protest.

Ana Santoyo, a 22 year-old ANSWER organizer who was arrested said, “This was no doubt one of the most important mass protests in Chicago that I have ever been a part of. We should support and help this movement grow and spread. The right to a job, a home, free education and healthcare, those are rights everybody should have and we’ll keep fighting until we achieve those basic rights and more.” The coordinator of ANSWER Chicago was also arrested.

October 15 was a global day of action with protests against capitalist austerity and endless war in over 1,000 cities in 83 countries. Across the country, hundreds of new occupations were started.

Repressing and arresting students and young workers that are standing up against the billionaires for their basic rights has not succeeded in stopping the Occupy movement. This revolution in the making that flows from the growing inequalities of the economic system is gaining momentum. For example, Occupy Chicago had one of their largest General Assemblies to date on October 16, the day after the coordinated assault on their rights.

The growing participation and leadership of young people, labor and especially communities under attack like the African-American and immigrant communities will be a central factor in what kind of impact this new movement will have. The people, especially when they are united around the struggles of those most oppressed by Wall Street’s domination over society, will make their own history and win.