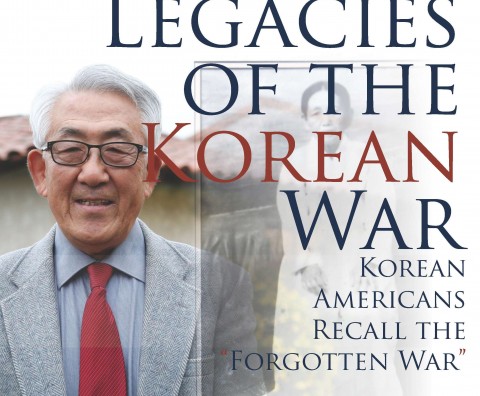 Announcing the Launch of the Legacies of the Korean War Oral History Web Archive!

On Saturday, October 17th 2015, in Berkeley, California, there will be a launch event for this new Oral History website in a program entitled: Korean Americans Recall the “Forgotten War”

Open and free to the public, there will be panel presentations by Professors Namhee Lee (UCLA) and Ramsay Liem (Boston College) and filmmaker Deann Borshay Liem and others, including testimonies by community members.  The new website will be unveiled with screenings of some of the short video documentaries.   This event is being sponsored by the Center for Korean Studies at the University of California at Berkeley.

For a preview of an oral history video from the upcoming site, please visit the Legacies of the Korean War youtube channel.

This 2015, we are marking the 70th anniversary of both the liberation of Korea from Japanese colonialism, and the division of the country into north and south.  This year is also the 62nd anniversary of the signing of the July 27, 1953 Korean War Armistice Agreement – which temporarily stopped the fighting, but has yet to end the war.  In this historical juncture in which first-generation Korean Americans, many of whom are part of the generation of living memory, are rapidly passing, the Legacies of the Korean War project seeks to tell the story of the war from a much-needed testimonial lens and to record these invaluable perspectives for posterity. With support from theCalifornia Council for the Humanities, and the University of California Humanities Research Institute, the Channing and Popai Liem Education Foundation and individual donors, the Korea Policy Institute (KPI), and Mu Films, this project brought together a team of Korean Studies and Asian American Studies scholars and filmmakers who are creating an online, interactive website that collects and shares primarily California-based Korean American survivor memories and legacies of the Korean War.

Aimed at educating the wider public about the Korean War, this oral history project, initiated in summer 2013, will launch an online archive that documents survivor, witness, and participant experiences, focusing primarily (but not exclusively) on the first-person stories of the Korean immigrant community in California, the second largest ethnic Korean population outside Korea. The initial phase of the project will include creating a handful of professionally shot video shorts of testimonies of elderly Korean Americans as well as select second- and third-generation accounts.

For an example of the material that will be featured, please see a preview from the website on ouryoutube channel.

As this project continues, we urge community members to participate, through recording their families and friends who are survivors of this conflict and are willing to share their memories.

The project seeks oral histories of community members to complement the filmed stories. We invite Korean Americans to help create these resources by doing any of the following:

These submissions will be reviewed and possibly edited (in conversation with the contributor) for inclusion and non-exclusive publication on the Legacies of the Korean War website.

For more information about this Cal Humanities project and to submit your materials, please feel free to contact [email protected] to reach the following three point-people for this project: Christine Hong  (UCSC), Namhee Lee (UCLA) and Deann Borshay Liem (Mu Films). Soon, there will be a site that materials can simply be uploaded to.

This project continues to need further funding.  If you are interested in supporting this project, please make a donation to KPI and  specify that your donation is for the Legacies of the Korean War project, or you can also visit mufilms.org, which will house the Legacies website.