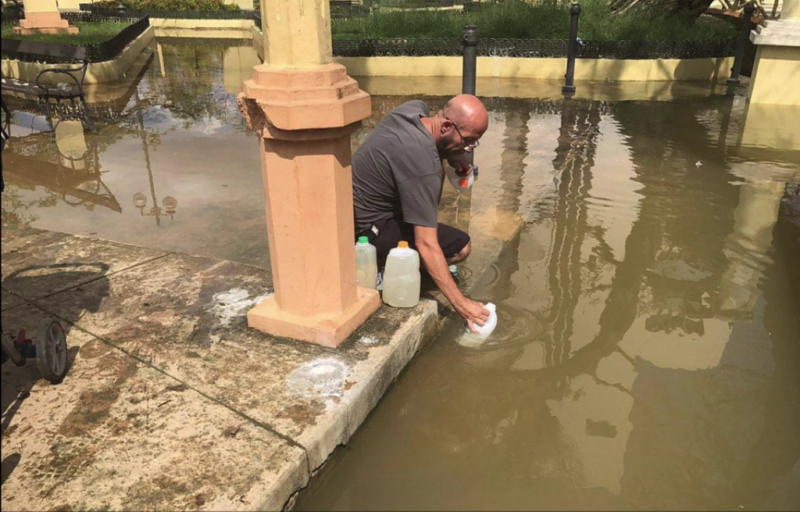 Oct. 20 marked a month since the catastrophic Hurricane Maria made landfall in Puerto Rico. The humanitarian crisis in Puerto Rico continues to grow worse day by day, due to the blatant negligence of the U.S. government and the colonial status of the island nation. Volunteers on the ground report that most Puerto Ricans have not seen any federal aid. The hurricane took down 90 percent of the island nation’s electrical grid, destroyed 80 percent of its agriculture, and left over 400 Boricuas dead.

On Oct. 25, a $300 million contract to repair the electric grid was awarded to Whitefish Energy, a company so small and inexperienced that even the mayor of San Juan expressed “alarm” and called on the contract to be voided. Puerto Rican activist Shawn Garcia from the Justice Center in New York City’s East Harlem sees this contract and other measures as signs that U.S. corporations view the crisis in Puerto Rico as an opportunity to enrich themselves at the expense of the Puerto Rican people.

At the same time, grassroots relief workers and activists who have gone to Puerto Rico to provide assistance have been held at gunpoint and harassed by military personnel.

A few weeks back, we reported that tens of thousands of shipping containers full of food, water, medical supplies, power generators, and other critically needed aid were sitting in the ports of San Juan thanks to logistical failings of various government agencies tasked with distributing this aid, including FEMA and the National Guard. As of Oct. 25, hundreds if not thousands, of containers still sit at the port while majority of the 3.5 million Puerto Ricans on the island are still without food, clean water, medicine and electricity.

Yet Trump continues to boast about the “really great job” his administration has done post-Maria, and FEMA continues to fire back at critics by asserting they’ve handed out millions of aid packages.

On-the-ground reports state that this “aid” consists of about three water bottles and small snacks like a can of Vienna sausages, a packet of Skittles, and a few granola bars per family. FEMA officers have actually stated that they are not required to give out any more aid after each family has received the parcel, leaving thousands of families forced to survive on this small package until more aid was given by other entities!

A media brigade of Boricua journalists living in the U.S., including People’s Congress of Resistance convenor and 2008 Green Party vice presidential candidate Rosa Clemente, visited the island on Oct. 6. They spent about 10 days reporting on what was happening on the ground in a campaign called “PR On the Map.” (See their slideshow on conditions here.) They were horrified to find that FEMA and military personnel were spending their nights partying in San Juan hotels with plenty of hot food, liquor, electricity, and a DJ to entertain them. Meanwhile, many on the island have yet to receive aid and have no way of communicating with their loved ones on the island and abroad.

A group of volunteer relief workers and activists with the Mutual Aid Disaster Relief from Florida distributed aid to communities on the western side of the island that had been totally neglected by FEMA. They brought 2,000 pounds of food, medical supplies, and other aid items to Boricuas who had not received a single bit of aid since the hurricane hit, nor food or water.

In a terrifying encounter on Oct. 16, the Florida relief brigade was raided by heavily armed local police and a SWAT team who held them at gunpoint and searched their headquarters in a church. The volunteers were asked if they belonged to ANTIFA, or Black Lives Matter, had any intentions of overthrowing the government, and other politically charged questions. This raid is part of a long history of police intimidation and political repression in Puerto Rico.

Meanwhile, private security firms are being rushed to Puerto Rico. According to the Oct. 16 New York Post, the U.S. security firm Academi, formerly known as Blackwater, said it was asked at least five times to submit a bid on what it would charge to send its mercenaries to Puerto Rico. One job offer was from Federal Protective Services, part of the Department of Homeland Security.

Why is the government spending money on hired guns rather than rebuilding homes? According to Garcia, “The government doesn’t want an anti-colonial spirit to be ignited [in Puerto Rico]. They don’t want an anti-austerity movement to come out of this crisis, so they are going to be working very hard to make sure that this doesn’t happen.” He said one can “expect more harassment especially on the grass roots, community level, activist people coming to Puerto Rico and trying to help people in the highlands.”

The number of deaths is the figure usually used to measure the scope of a disaster. FEMA’s official count is 48. The news site Vox counted the deaths reported in diverse news reports, cross-checked them and came up with a figure of at least 450 dead. Many feel that this number is still low, as the death rate is most likely rising due to the continued shortages of food and water and shelter and due to contaminated living conditions and shortages of medications and unavailability of health care.

Living conditions reported by nurse volunteers indicate the death toll, as well as the disease burden, is probably much greater. Registered Nurse Response Network volunteers found people still living in roofless houses with soaked interiors, where dangerous black mold creates respiratory distress and illness. They reported outbreaks of leptospirosis, a deadly bacterial disease that has already claimed lives, and of finding many with no clean water.

“These communities are at great risk of water-borne illness epidemics. They need clean water that is safe to drink,” said RN Erin Carrera, who described a trip nurses took to Utuado, a mountainous region in the center of the island, where weeks after hurricane Maria, many residents had still received no relief. “These conditions would not be tolerated in the 50 states. It is outrageous that we are leaving our fellow Americans with essentially no aid.”

With millions of people in need, many were startled to learn that the Puerto Rican power authority PREPA made the unusual choice of hiring a private company, the Montana-based Whitefish Energy started in 2015, to handle the electrical grid repair process. In most cases of natural disaster recovery, governments activate “mutual aid” agreements it already has with other facilities.

Little is known about the firm, named after the town of Whitefish, Montana, where it is located, and which happens to be the hometown of U.S. Interior Secretary Ryan Zinke. The company had a whopping two full-time employees the day Maria made landfall. Even San Juan Mayor Carmen Yulín Cruz said on Oct. 25 that she found the choice of this company, which will have to outsource almost all the work, “alarming.” She called for the awarding of this contract to be replaced by “a proper process which is clear, transparent, legal, moral and ethical.”

Whitefish has never handled a federal project costing more than $1.3 million, which was to fix a 4.8-mile transmission line in Arizona. Compare that with the over 300 miles of transmission lines in Puerto Rico, this tiny but pricey firm seems to have a lot on its hands.

To top it off, Governor Ricardo Rosello has promised that 95 percent of the island nation’s power will be restored entirely three months after Maria, by December 15th, which CEO of Whitefish Andy Techmanski says may not be possible. In the midst of Puerto Rico’s biggest financial crisis, making a $300 million contract with a tiny and inexperienced company to fix an electrical grid that was in shambles pre-Maria is another clear signal that the government does not have the needs of the people in mind. The Whitefish company has admitted that it must outsource most of the work.

Garcia sees the hiring of Whitefish Energy and subsidiaries, whose expertise is shaky at best, as an attempt by U.S. companies to profit from the disaster at the expense of the Puerto Rican people. He said that the plan is to give away “millions of dollars to these companies to ‘rebuild’ Puerto Rico, but these efforts are not being done by Puerto Ricans, or for Puerto Rico.” In marked contrast, very few resources are going into the relief efforts that directly benefit the population.

“These are part of the efforts to privatize the economy, starting with the electric grid,” Garcia concluded. “It is important to call out this privatization” and to defend the sovereignty and integrity of Puerto Rico.