One year later, struggle for justice for Mike Brown continues

Demonstrations took place across the country to mark the one-year anniversary of the murder of Mike Brown by police officer Darren Wilson. The uprising in Ferguson, Mo., that followed his killing has sparked a nationwide movement against racist police brutality and for Black liberation that continues to gain momentum. Below are reports from some of the cities were ANSWER chapters participated.

On August 8, hundreds of protesters met at the African American Civil War Memorial in Washington, D.C., to march and rally to observe the passing of one year since Mike Brown was killed in Ferguson, Mo., by officer Darren Wilson. The march and rally, organized by Stop Police Terror Project DC, was called not only to lift up the name of Mike Brown but to also reaffirm the need to struggle against racist militarized policing, as evidenced by the recent deaths of Sandra Bland, Kindra Chapman, Ralkina Jones, Sam DuBose, Christian Taylor and others. This point was driven home even further when it was discovered that a woman was shot in Northeast D.C. by police the same day the demonstration took place.

After a rally that included an unexpected speech by veteran activist Dick Gregory, the march made its way through the U Street area and ended in Chinatown while bar and restaurant patrons looked on. A few people even came off the sidewalks and joined the demonstration. There was also an impromptu die-in at the busy New York Avenue entranceway to interstate 395 that lasted four-and-a-half minutes, to symbolize the four-and-a-half hours Mike Brown’s body laid exposed in the Missouri summer sun. This was an emotional and high energy march from start to finish, and was a great inaugural event for SPTP-D.C.

With Black people in America being killed by police every 28 hours, with at least 13 transgender people being killed just this year and with the issues of unemployment, fair wages, housing and gentrification becoming more severe, it’s clear that state-sanctioned violence takes many forms and police terror is simply one aspect of that systemic onslaught. We should not be discouraged by this; we must use these continued abuses as fuel for our struggle against the ravages of America’s social, political and economic order. 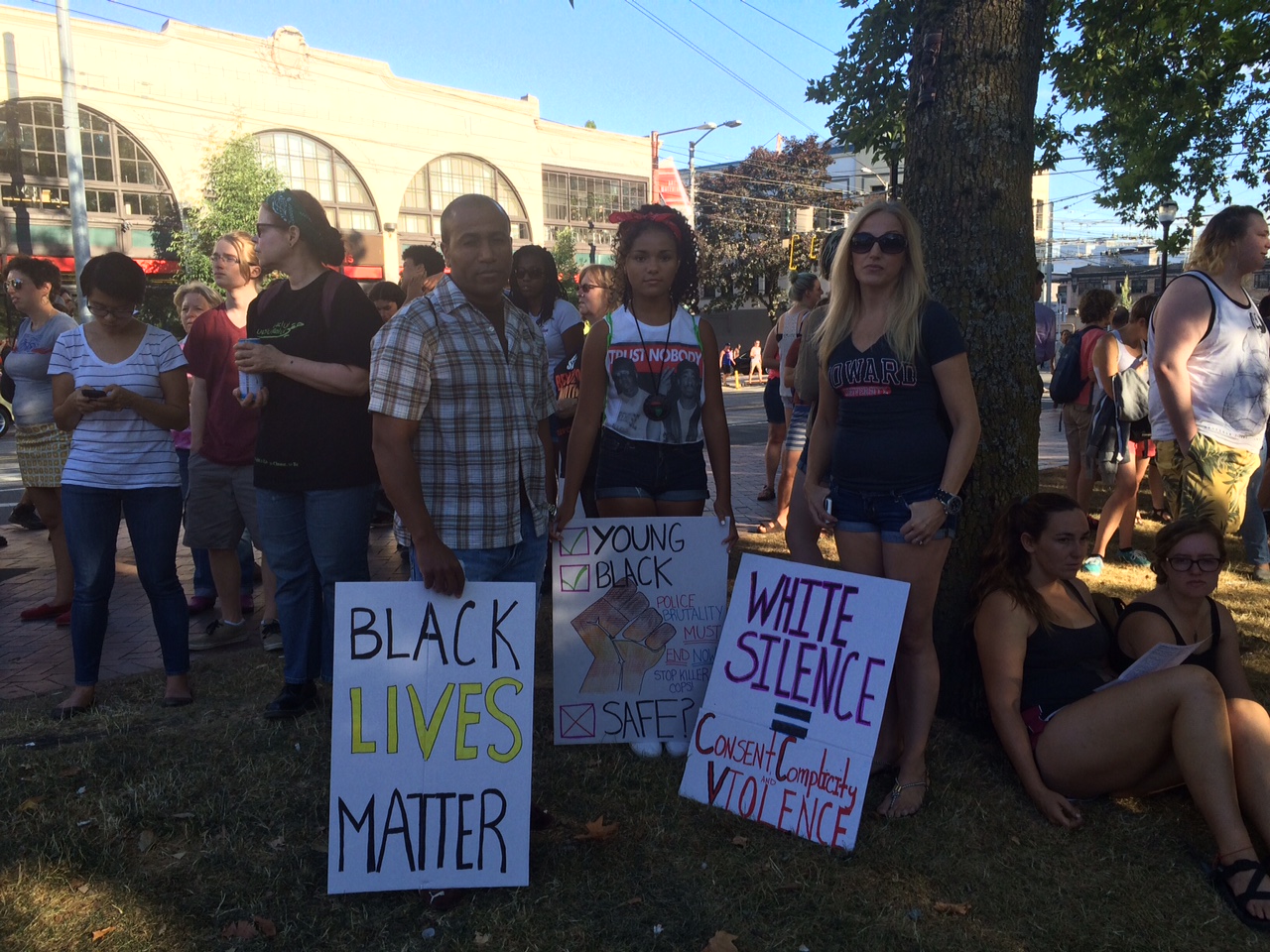 Hundreds of marchers came out on Aug. 9 to mark the one-year anniversary of the killing of Mike Brown by Ferguson cop Darren Wilson. Gathering at the Seattle Central Community College in the Capitol Hill neighborhood, the event began with a spirited rally in which speakers encouraged those present to deepen their commitment to the struggle against racism. At around 7:00 p.m., the march kicked off, taking to the street chanting, "Whose lives matter? Black lives matter!"

The marchers then took the intersection at Pine and 12th in front of the East Police Precinct, home base of notorious racist cop Cynthia Whitlach, who last summer illegally arrested and detained an elderly Black man who was walking using a golf club as a cane. The local community police board has recommended that she be fired for the obvious lies that she told and the clear evidence of racial bias in her actions. The racist police union has vowed to defend her.

In front of the precinct, before continuing the march, demonstrators held a speak-out. In a particularly moving instance, a man came forward with his two sons, ages 8 and 12. Gesturing to them, he shouted at the police lining the street, "This is my family. They are not thugs. I will do anything to protect them!" 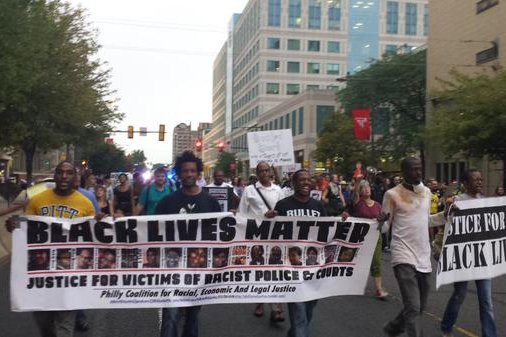 Protesters gathered in Philadelphia to reaffirm their commitment to the struggle for justice for Mike Brown and all victims of racist police brutality. Speakers gave moving statements inspired by the #IfIShouldDieInPoliceCustody hashtag. The demonstration was initiated by the Philadelphia Coalition for REAL (Racial, Economic and Legal) Justice.

The rally then departed from Broad and Erie, in the heart of North Philadelphia, a predominantly Black section of the city that suffers intensely under the boot of the racist police, and headed south towards Cecil B. Moore Ave. Taking up all lanes of traffic in one of the city's main streets, the march militantly chanted and agitated, receiving a warm welcome from onlookers. At the closing of the demonstration, organizers unfurled a massive banner with the names of women recently murdered by police. Activists are determined to continue the movement launched one year ago by the heroic people of Ferguson. 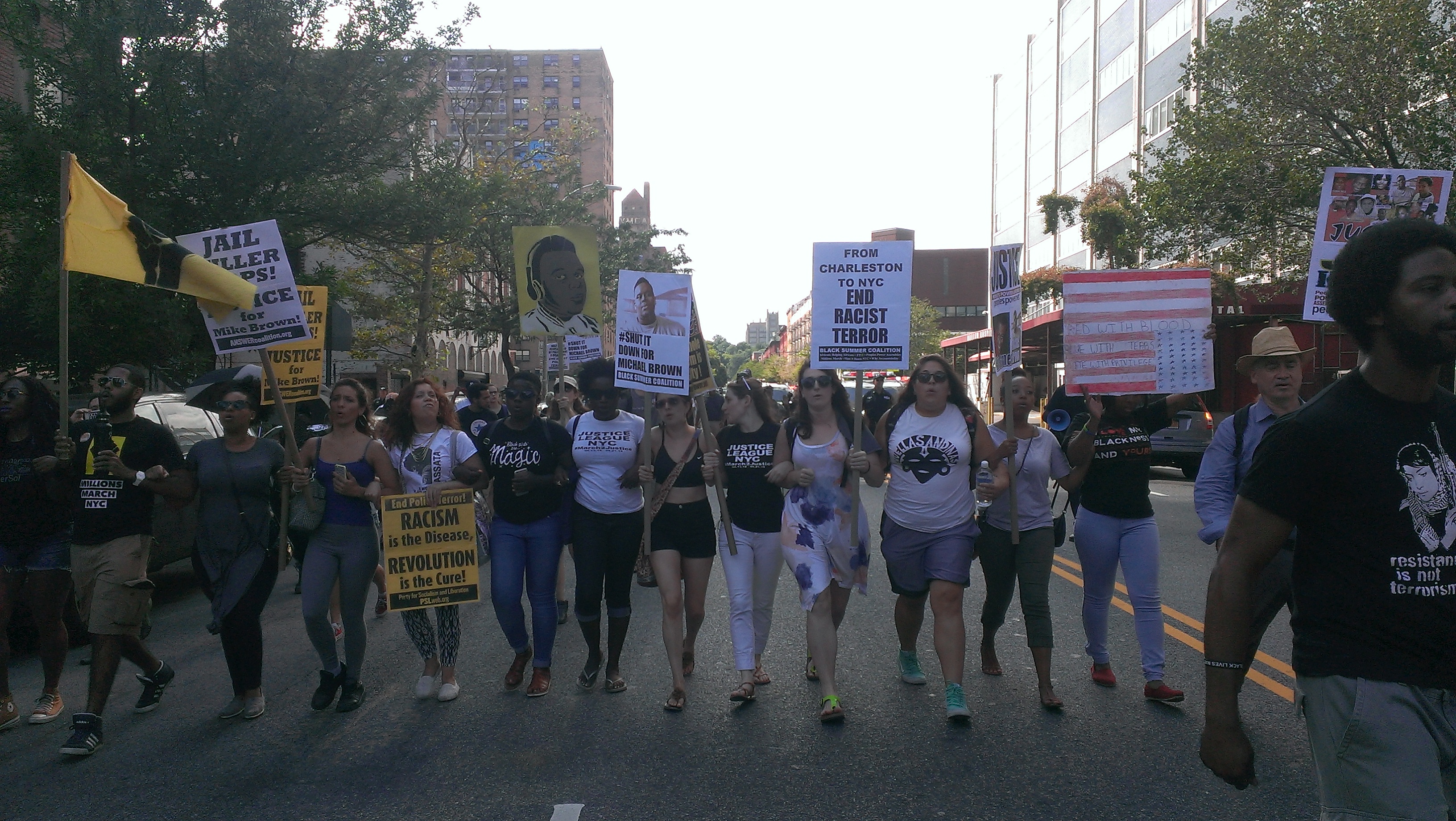 On Aug. 9th, hundreds of protesters converged at the Harlem State Building on 125th Street to continue the fight for justice on the one-year anniversary of Mike Brown’s murder.  Many protesters had taken the trains from an earlier action in Brooklyn.  The police heavily patrolled the entirety of the demonstration, constantly repeating that protesters remain on the sidewalk.

In the opening rally, representatives from various organizations spoke about the significance of Ferguson in the context of rampant police brutality and attacks on Black America.  Shannon from “Why Accountability?” a community-based organization in the Bronx demanding the removal of so-called “bad apple” cops, spoke of the hypocrisy of local politicians in supporting demands to expand the NYPD but not provide resources that the people need.  In addition, she connected violent attacks on the Black community to Broken Windows policing, an NYPD practice that targets Black and Brown people and criminalizes minor activities and infractions as a way to “clean-up” neighborhoods.

Nicholas Heyward also spoke, who is the father of Nicholas Heyward Jr., a 13-year old who was shot by housing police in a staircase 21 years ago.  He continues his fight against racist policing and the Broken Windows doctrine.

After the rally, protesters marched towards the Bronx via Malcolm X Boulevard, over the Madison Ave. Bridge, and through the Bronx to 149th and 3rd Ave.  The police maintained an intense presence whether on their motorcycles, police cars, police vans or on foot.  Protesters attempted to take the street several times but were only able to take a lane in Harlem and one side of the street in the Bronx.  After the height of the march ended, the police made a couple of arrests to the perceived leaders of the march.

With a multi-national demonstration with a wide age range of participants, the overall message remained that we need to be united in the fight against racism that disproportionately affects Black America.