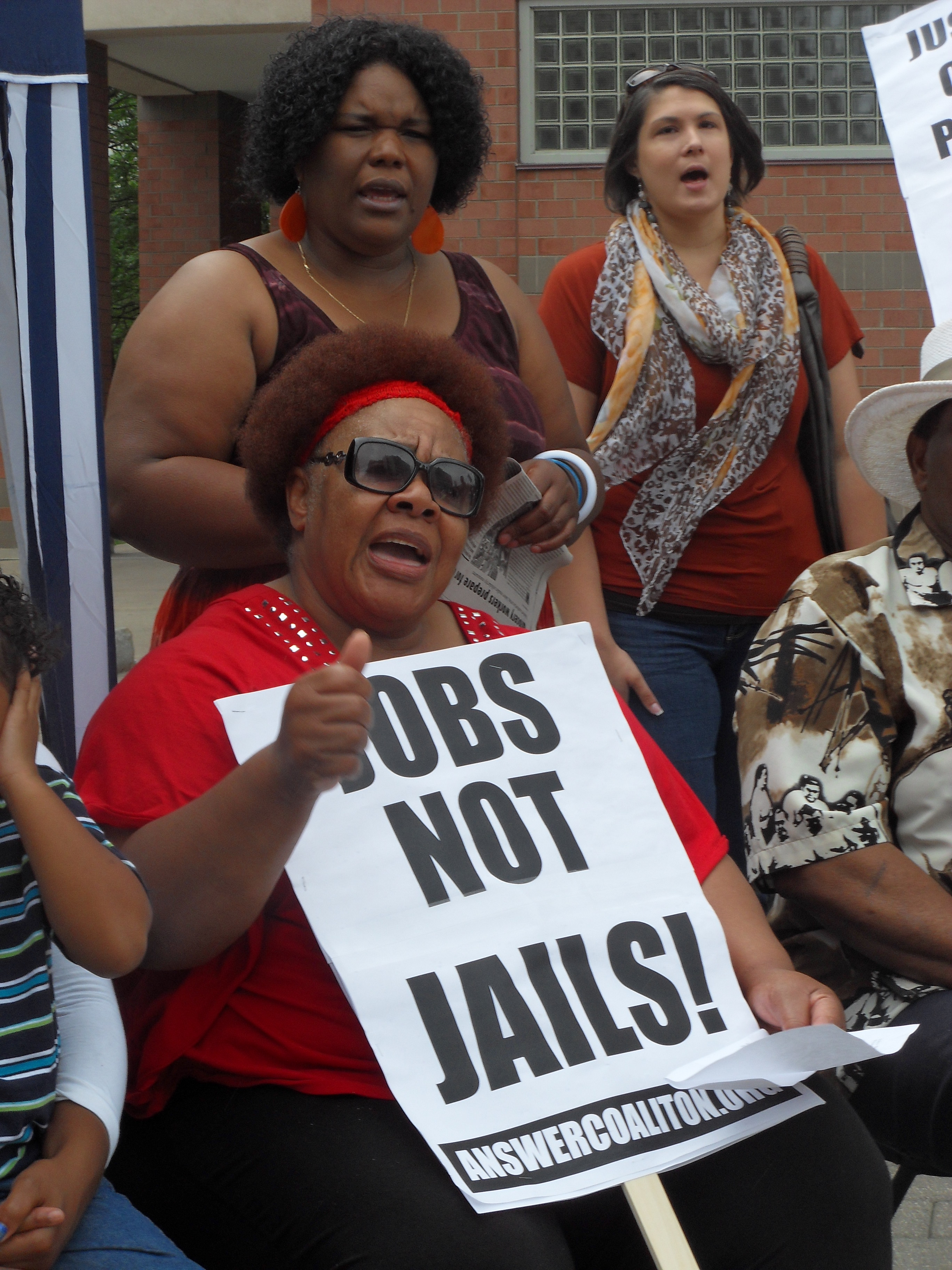 Chundra Smith (rear) at a protest in front of the county jail.

Proceedings in the case of Chundra Smith vs. Onondaga County began in state Supreme Court this morning around 10:00 am, after a one-hour delay. Chundra filed a civil suit against the county for the death of her daughter, Chuniece Patterson, on Nov. 12, 2009.

In reality, Chuniece was killed by Onondaga County jail sheriffs and nurses by medical neglect. They sat idle for 14 hours while Chuniece pleaded with them for help. Sheriffs and nurses ignored her cries for help, told her that she was “faking it” and even yelled at her to get up as she was on the floor vomiting.

Chuniece had suffered from a ruptured ectopic pregnancy. Jail authorities knew that Chuniece was pregnant when she was admitted into the misnamed “Justice Center.” Yet they chose to disregard her initial complaints of abdominal pain.

This wasn’t the first time that a woman had been killed in the exact same manner at the jail. Fourteen years earlier, Lucinda Batts also suffered a ruptured ectopic pregnancy and was killed by medical neglect. The pattern doesn’t end there: jail nurse Diane Stech was on duty and involved in both of the deaths!

A movement erupts in Syracuse

Given Sheriff Kevin Walsh and the County’s smug response to the death of Chuniece, and the consistent history of brutality, neglect, and murder at the hands of jail authorities, it was clear that a fight-back movement was needed. Immediately, Chundra’s family, friends and congregation—Another Level Ministries—began organizing themselves.

Later, they linked up with other community organizations. ANSWER Syracuse and the Party for Socialism and Liberation held a community forum after the state Commission on Corrections issued a damning report against the county jail for their role in Chuniece’s death. By the time the forum happened, jail deputies had killed another person, Raul Pinet Jr.

At the forum, over 50 community members and activists joined together and began organizing a march on the jail, which took place less than a month later. An impressive and diverse coalition of community groups joined together at the time, forming the United as One Coalition. Over the past three years, the movement has worked to hold law enforcement accountable.

Chundra filed her wrongful death lawsuit against the city soon after Chuniece’s death. Recognizing the damning evidence against them, the county worked to reach a settlement. In June 2012, the County legislature approved $215,000 settlement.

Chundra rejected the county’s offer. It wasn’t because the offer was too low; it was because it would have allowed the County to forego admitting responsibility. For Chundra, it has never been about the money. It has been about the principle, doing what’s right and fighting for justice.

In that respect, the people won a major victory in Dec. 2012 when, ahead of the initially scheduled court date, the county admitted negligence in Chuniece’s death. The trial today is taking place to determine the amount that the county must pay for causing Chuniece’s death.

The suffering that Chuniece underwent because of the jail system, its deputies and nurses, is unquantifiable. So, too, is the suffering felt by Chundra and her family. But this is one way that the county can be made to pay and be held accountable. Organizers with ANSWER Syracuse have accompanied Chundra into the courtroom today, and we send our unconditional support and solidarity to Chundra and her family and friends.

We will keep our members and supporters updated as to the progress of the trial. Additionally, we are planning an event to celebrate Chuniece’s life and to observe the end of this difficult process for Chundra and her family. Stay tuned for updates.