Pentagon blows up thousands of homes in Afghanistan

Borrowing a page from its infamous “pacification” effort in South Vietnam, where peasant villages were napalmed and burned to the ground to “save them from the communists,” the Obama-ordered surge in Afghanistan has been secretly blowing up thousands of homes and leveling portions of the Afghan countryside.

As tens of thousands of U.S. troops have surged into southern Afghanistan, villagers have fled. Then the Petraeus-led occupation forces have determined which homes will be destroyed.

“In Arghandab District, for instance, every one of the 40 homes in the village of Khosrow was flattened by a salvo of 25 missiles, according to the district governor, Shah Muhammed Ahmadi, who estimated that 120 to 130 houses had been demolished in his district,” reported the New York Times, Nov. 16, 2010.

The Pentagon asserts that they must destroy the homes because some of them may have explosive devices inside.

The Pentagon’s murderous rampage and terror campaign 40 years ago against South Vietnamese villages, in areas that were considered sympathetic to the resistance forces, used much of the same kind of explanation. In fact, the New York Times in a throw back to Vietnam quotes the Arghandab District Governor, who is working with the occupation forces: “We had to destroy them to make them safe.”

That this tactic is part of a high-tech terror campaign against Afghan villages and the people who inhabit them is evident even by the descriptions and accounts of western media outlets that are supporting the war.

“American troops are using an impressive array of tools not only to demolish homes, but also to eliminate tree lines where insurgents could hide, blow up outbuildings, flatten agricultural walls, and carve new “military roads,” because existing ones are so heavily mined, according to journalists embedded in the area recently.

“One of the most fearsome tools is the Miclic, the M58 Mine-Clearing Line Charge, a chain of explosives tied to a rocket, which upon impact destroys everything in a swath 30 feet wide and 325 feet long. The Himars missile system, a pod of 13-foot rockets carrying 200-pound warheads, has also been used frequently for demolition work.

“Often, new military roads go right through farms and compounds, cutting a route that will keep soldiers safe from roadside bombs. In Zhare District alone, the 101st Airborne’s Second Brigade has lost 30 soldiers since last June, mostly to such bombs.”

Activists at the organization Afghanistan Rights Monitor described the destroyed homes. “These are all mud houses, quite humble houses.”

When Gen. David Petraeus describes his counter-insurgency strategy, he always puts in a few diplomatic words about the need of surging troops to win the “hearts and minds” of the people in Afghanistan’s poverty stricken villages. That is purely for public consumption—a message echoed endlessly by the complicit corporate-owned media and the politicians of both parties that serves as a mask for the Pentagon’s campaign of systematic terror employed to subdue an occupied people.

On Dec. 16, 2010, anti-war veterans and people of conscience will stand up in a dramatic action in opposition to the terror campaign waged from the White House and Pentagon. Join us in Washington, D.C. on Dec. 16 and be part of history.

Join the U.S. veteran-led civil resistance to the wars
Take a Stand for Peace
December 16 ● Washington, D.C. ● The White House
Gather at Lafayette Park at 10am 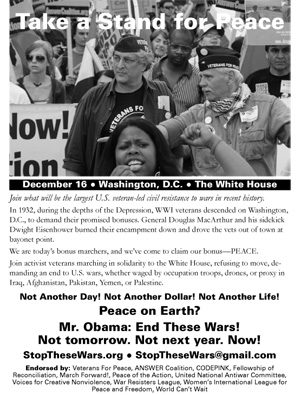 In 1932, during the depths of the Depression, WWI veterans descended on Washington, D.C., to demand their promised bonuses. General Douglas MacArthur and his sidekick Dwight Eisenhower burned their encampment down and drove the vets out of town at bayonet point.

We are today’s bonus marchers, and we’ve come to claim our bonus—PEACE. Join activist veterans marching in solidarity to the White House, refusing to move, demanding an end to U.S. wars, whether waged by occupation troops, drones, or proxy in Iraq, Afghanistan, Pakistan, Yemen, or Palestine.

Mr. Obama: End These Wars!
Not tomorrow. Not next year. Now!