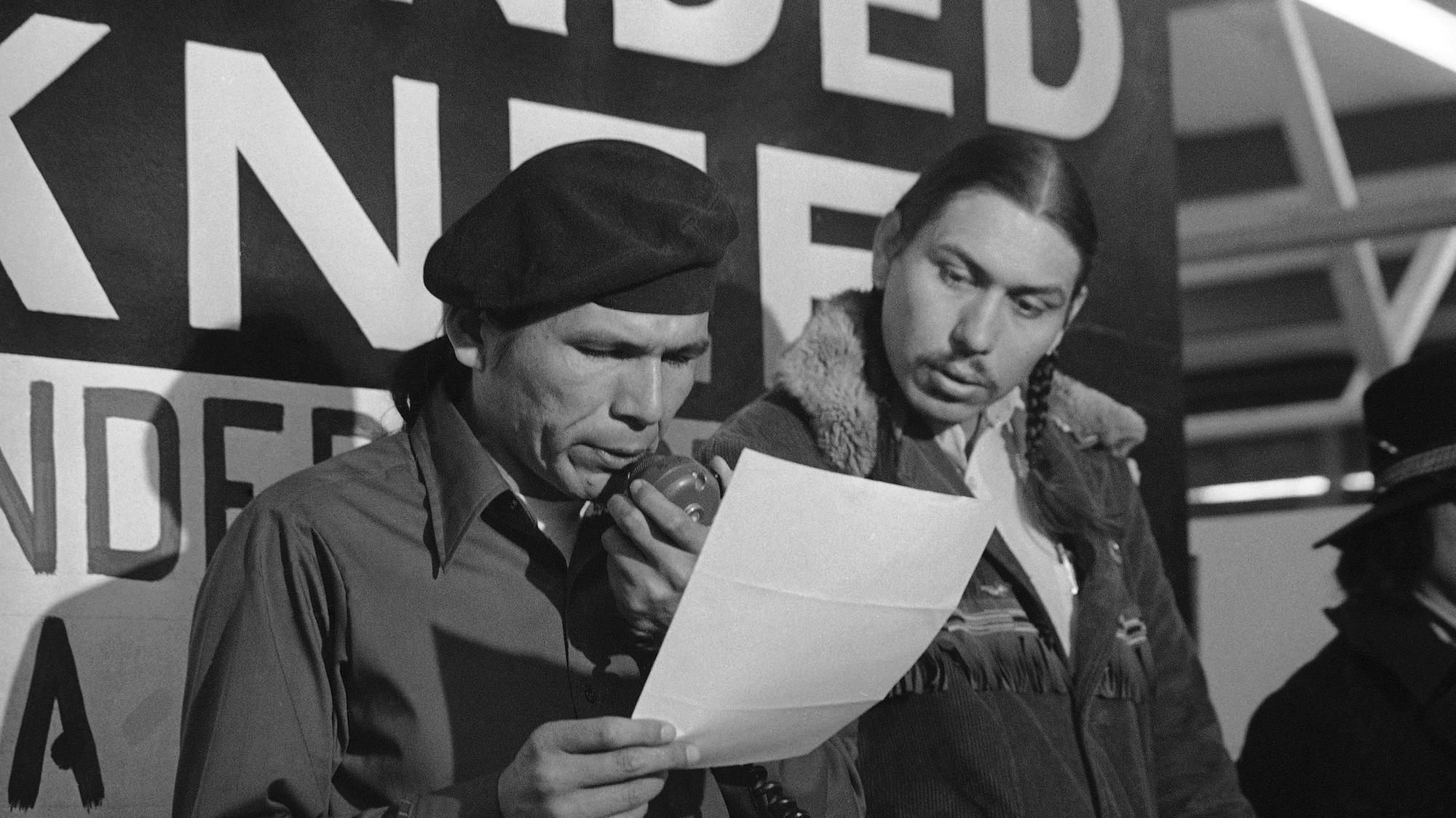 Dennis J. Banks, Nowa Cumig, great Native warrior and lifelong fighter for freedom and justice, died on October 29 surrounded by his family at the Mayo Clinic. He had developed pneumonia after heart surgery.

Banks was a humanitarian who embraced every struggle, opposing South African apartheid, defending Cuba’s revolution, demanding Leonard Peltier’s freedom, working to end the drug crisis, diabetes and domestic violence. He spent many days and nights with the water protectors at Standing Rock.

Banks co-founded the American Indian Movement in 1968, a liberation movement that arose as part of the great civil rights struggles of Black, Latino and Native people in the United States against racism and national oppression.

Banks and other AIM leaders gained national attention in 1973 by their historic 71-day occupation of Wounded Knee on the Pine Ridge Reservation, South Dakota, amidst a U.S. military siege. That courageous resistance by Native men and women, youth and elders, helped drive forward the Native struggle for sovereignty.

They led the 1972 Trail of Broken Treaties march to Washington DC and takeover of the Bureau of Indian Affairs building, and took part in the Alcatraz occupation in 1969, among other major campaigns.

Banks was born on April 12, 1937 of the Ojibwa/Anishnabe nation in Leech Lake, MN. His autobiography Ojibwa Warrior (with Richard Erdoes), describes his early years and the poverty and oppression that his family experienced, especially at the hands of government agencies. It was an experience of a genocidal policy that was endured by Native people across the U.S.

On one occasion, his mother took him to town to the welfare office seeking clothes for her children. They were denied.

He recalled, “Then we had to stay in town overnight with no place to go. We slept huddled on a bench, and the next day we walked the thirteen miles back to our house because we didn’t encounter a single car or buggy willing to pick us up.”

At the age of five, Banks was kidnapped from his family and forced to live for 11 years in a series of notorious “Indian schools,” the racist U.S. government institution where Native children were systematically denied their language, culture and were brutally treated. He ran away several times to try to return home. Later, as AIM leader he and others successfully fought to dramatically reform that racist school system, with many closed.

Seeking a way out of hopelessness, Banks joined the army at 17 and was sent to Japan, where he soon awoke to the repressive U.S. military occupation of Japan and felt solidarity with the people’s resistance. Later, he fell in love with a young Japanese woman, Machiko, but the army forbade him to marry her. He had done so anyway and went AWOL with his wife and baby. He was court-martialed and sent to the U.S. in chains.

After a time, Banks was living in Minneapolis, where he struggled to raise his second family with no money. He ended up in prison from 1966 to 1968 in what he called his “16 bags of groceries case.” It was in jail that he became politicized and resolved to fight for Native people’s rights.

“I would read the papers and see that demonstrations about civil rights and the Vietnam war were going on all over the country. I realized that I desperately wanted to be part of a movement for Indian people, but we had no organization to address social reform, human rights, or treaty rights.” (Ojibwa Warrior)

On July 28, 1968, Banks and his friend from boarding-school days, George Mitchell, put out a call for a meeting to address police brutality, prison, broken treaties and more. More than 200 people came.

That night the American Indian Movement was born, with Banks as field director and Clyde Bellecourt the first chairman. Within two years, there were 5,000 members and by 1973, 79 chapters.

The actions they undertook were legendary for standing up to racist oppression in a way that had not been done before. It had always seemed before that conditions would never change.

But they did and consciousness grew. Banks and other AIM leaders like Russell and Bill Means, Vernon and Clyde Bellecourt, women like Madonna Thunderhawk, Nilok Butler and Phyllis Young, and countless others stood up to the power, and inspired many more.

In 1972, an Oglala Sioux man named Raymond Yellow Thunder was beaten to death in Gordon, Nebraska by two white men. They were released to wait trial, certain to face little or no punishment.

This inevitably brought state repression in the years following, with Dennis Banks a principal target.

In 1973, a Native man, Wesley Bad Heart Bull, was stabbed to death by a white man, Darald Schmitz, in South Dakota. When AIM organized a car caravan to the courthouse in Custer to demand murder charges instead of manslaughter, the prosecutor refused. What ensued was a riot attack by dozens of state troopers and police as they severely beat young protestors and Bad Heart Bull’s mother, Sarah.

The courthouse was set afire in response by the protesters.

By this time the FBI was heavily targeting civil rights and national liberation forces, including the Black Panther Party and AIM, by surveillance, infiltration and later, federal persecution.

Dennis Banks was in the crosshairs of the FBI’s Cointelpro operation, together with other AIM leaders. He was charged later with assault and rioting for the Custer struggle with Sarah Bad Heart Bull, who served five months in jail for the protest. Schmitz never served a day in jail.

With such deep poverty, repression and resistance from Nebraska to South Dakota, everything was heading toward a confrontation at Wounded Knee on Pine Ridge Reservation.

The Pine Ridge community was being severely repressed by the rightwing tribal government of notorious Dick Wilson, who was backed by the FBI. He had staged a coup against an impeachment attempt on corruption charges.

Only AIM was willing to defend the Oglala Sioux elders and the people’s traditional ways.

On the evening of February 27, 1973, a community meeting was held and Banks and Russell Means were summoned to help. It was the women who put the question to AIM: What are you going to do to defend us?

Banks responded and said the community could expect AIM’s total support. That night, with hundreds of people in dozens of cars, he and Means led the caravan to Wounded Knee to openly declare it free territory.

Within hours, the FBI began to surround the camp in an action that soon brought U.S. armored tanks and .50-caliber machine guns in a full military siege. The Pentagon coordinated the operation.

For 71 days, the warriors held, despite tens of thousands of rounds fired by the government and threats of larger military assault. Solidarity sprung up with food and supplies ferried in from many Native nations and other activists answering the call.

After Wounded Knee the repression intensified against the people on Pine Ridge, with more than 60 people assassinated by Wilson’s police. In 1975, the FBI raided the reservation and a firefight broke out in self-defense. Two FBI agents were killed in the action. Native activists Dino Butler and Bob Robideaux were acquitted on charges of the FBI deaths, but Leonard Peltier, who was present in the incident but not responsible for their deaths, was persecuted by the FBI with false evidence and convicted.

Peltier has remained in prison for more than 41 years, the price the FBI has exacted for an incident they are solely responsible for.

He and Russell Means were acquitted of all federal charges over Wounded Knee in a trial that lasted nine months. Judge Frederick Nichol ruled that massive government and FBI misconduct had “polluted the waters of justice.”

But Banks faced prison time after being convicted of assault and riot charges in the Custer incident. Rather than surrender to racist South Dakota authorities, he and his family found refuge in California. With major support from political activists and personalities like Marlon Brando, Governor Jerry Brown refused to extradite Banks to South Dakota, believing that he faced danger in that state.

Later, he decided to return to South Dakota to serve 14 months for the conviction, gaining parole in 1985. He was free to continue his pursuit of justice.

For more than 30 years, Banks led Sacred Runs, joining with indigenous people of the U.S. and other lands. He organized five Longest Walks, most recently this year on the issue of the drug crisis, the diabetes epidemic and domestic violence. He opposed the U.S. wars in the Middle East, supported the Venezuelan revolution and traveled to Cuba several times. He visited Cindy Sheehan at her Camp Casey in front of George W. Bush’s vacation home in 2005. The camp was named after her son who was killed in Iraq. Banks was proud to be the 2016 Vice-presidential candidate for Peace and Freedom Party in California, and for Party for Socialism and Liberation in New Mexico, Colorado and Iowa, along with presidential candidate Gloria La Riva.

Banks traveled constantly to Standing Rock in 2016, often with his son Tatanka, devoting his energy against the Dakota Access Pipeline, even as he began to suffer serious health issues.

In one memorable February rally at Standing Rock, surrounded by youth, he told them, “You, in the face of rubber bullets, concussion grenades, water cannons, you stand ready, not caring what it might do to you, because you are living up to your responsibility. You are a protector not only of water, but also the air and the soil.”

Banks was a mentor to many Native youth, teaching them traditional ways, their history and encouraging activism. On his reservation land in Minnesota when not traveling, Banks spent time with his family. For years there he harvested wild rice and produced his famed maple syrup.

Banks leaves many children and grandchildren to whom he was greatly devoted.

His family issued a Facebook message to the world: “Our father Dennis J. Banks started his journey to the spirit world at 10:10 p.m. on October 29, 2017. As he took his last breaths, [son] Minoh sang him four songs for his journey. All the family who were present prayed over him and said our individual goodbyes. Then we proudly sang him the AIM (American Indian Movement) song as his final send off.”