Frank Lara is a member of the ANSWER Coalition, one of the groups in the Justice 4 Mario Woods Coalition, and on the Executive Board of the United Educators of San Francisco. 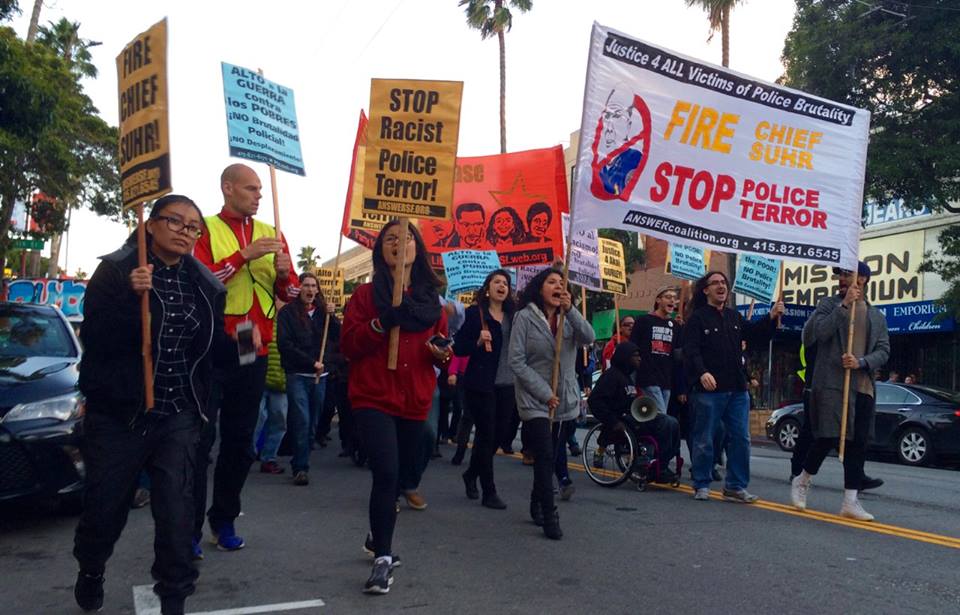 The morning of Thursday, May 19, the tragic news that there had been another victim of racist police terror spread throughout San Francisco. Jessica Williams was shot and killed after a police chase while she sat in her car in the Bayview district.

In an all-too-common routine, the notorious chief of police, Greg Suhr, appeared on camera to give the “official” police version that was quickly distributed by the mainstream news. However, unlike the previous killings, that’s as far as Chief Suhr got. Within a few hours, the equally infamous Mayor Ed Lee — just one day after he repeated his support for the chief — appeared on camera to announce that he was firing Suhr.

In that instant, it became clear that the politically astute and shameless Suhr would no longer be allowed to manipulate radio, TV and the newspapers, spinning his unchanging narrative glorifying the cops and demonizing the victims. No longer would he be allowed to round up all the sell-out “representatives” of the Black and Brown communities, the heads of the Police Commission and the Office of Citizen Complaints to have a press conference claiming reform was coming as the bodies piled up in the background. No longer would he be allowed to re-enter the hearts of the Mission and Bayview neighborhoods to hold public meetings where images of machetes, aka nine-inch kitchen knives, would be put on display to justify another life taken by the gun of a cop. No longer, because Chief Suhr has been fired. And it is the people’s power that achieved this partial justice.

The small yet important victory came at a cost. Not only was another life taken, another family destroyed, but sacrifices were made by hundreds, if not thousands, who have been fighting for weeks, moths and years. They risked their health, arrest, expulsions and firings to achieve justice.

When Mario Woods was killed on Dec. 2, 2015, a coalition of many groups emerged to stop the routine killing of Black and Brown people in San Francisco. The Justice 4 Mario Woods Coalition galvanized City politics. From shutting down Market Street and disrupting Ed Lee’s inauguration, to making international headlines during the Super Bowl, the city elite knew well that they were being checked by a strong people’s force. Equally important was the leadership of anti-police brutality groups like the #Last3Percent and the Anti-Police Terror Project, the Justice 4 Alex Nieto and Justice 4 Amilcar Perez coalitions, along with the Justice for Mario Woods Coalition, of which the ANSWER Coalition is a part. Through the shutting of streets, freeways, vigils, marches and forums, a unity was forged of Black and Brown people allied with all justice-seeking individuals and organizations.

High school students from Balboa, June Jordan and Mission High courageously defied the warnings by school officials and took over City Hall. The San Francisco Labor Council, for the first time, demanded that the officers involved in the killing of Mario Woods be charged with murder. The General Assembly of the United Educators of San Francisco, representing more than 6,000 teachers, paraprofessionals and other staff, passed a resolution just the day before calling for the replacement of Suhr, as did the statewide California Federation of Teachers.

As if this was not enough, five bold individuals, known as the #Frisco5, risked their own lives to achieve justice by staging a 17-day hunger strike.

Important connections among people and ideas have been made through the growing movement against police killing and abuse. Homelessness, gentrification, inequity and corruption are all ills of this city, one of the current centers of capitalist greed in the United States, defended by the police who so often resolve issues with bullets and brutality.

We must continue to fight, unite and widen the struggle so that more allies and the broader public understand that we have a common interest in accessible housing, more teachers and paraprofessionals, and real living wage jobs or income for all, and not in prioritizing the police. Imagine what we could do if instead of paying over $300,000 for a police chief with even more expensive benefits, we paid paraprofessionals in the schools a livable income. Imagine if instead of shelling out at least $100,000 for every police officer in San Francisco, we raised salaries of educators so that they stay in the City. Imagine if instead of paying $5 million in overtime fees for the month of February’s Super Bowl activities, that money was distributed among 100 schools. Imagine if instead of a City and mayor that prioritized the rich and the cops who protect them, we finally began investing in our future and the people who make this city run.

We don’t have to imagine, we just have to build the people’s power that can achieve our demands. #FireChiefSuhr was once only a demand as well. Now, after we fought, it is a reality.