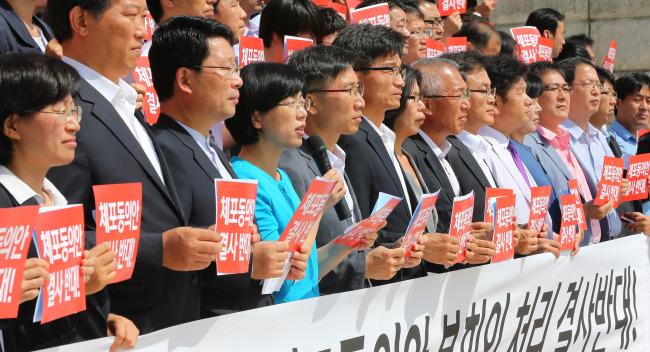 There are two legal proceedings currently underway that will determine the future of democracy in South Korea - the Constitutional Court trial on the Park Geun-hye government's petition to dissolve the opposition Unified Progressive Party (UPP); and the Supreme Court's final review of the government's case against UPP Representative Lee Seok-ki et al.

In the fall of 2013, the Park government arrested and charged Representative Lee Seok-ki and six other defendants - all members of UPP - on charges of conspiring to overthrow the government and violating the controversial National Security Law.

Shortly thereafter, the government also filed a petition in the Constitutional Court to dissolve the UPP.

In the Lee Seok-ki et al case, the Seoul High Court found the defendants not guilty of the highest and most controversial charge of 'sedition conspiracy' and found no evidence to support the government's claim that they were part of an underground subversive organization with ties to North Korea.  But the defendants still remain behind bars on lesser charges, including National Security Law violation.

Meanwhile, the trial that will determine the future of the UPP is currently underway in the Constitutional Court.

The director of Amnesty International's South Korea branch has said, "The indictment by National Intelligence Service and the prosecution [of Lee Seok-ki et al] has seriously damaged the human rights improvement of South Korean society which has struggled and fought for freedom of thoughts and conscience and freedom of expression."

MIT linguistics professor Noam Chomsky has said, "The courageous struggle of the Korean people for democracy has been an inspiration worldwide. The assault against the UPP is a serious blight on this record of achievement, the attempt to dissolve it even more so."

The Constitutional Court will hear closing arguments on the UPP case on November 25.  And the Supreme Court is expected to deliver a final ruling in the Lee Seok-ki et al case in December.

Pro-democracy forces in South Korea have launched a mass campaign to defend democracy and appeal for international support.  I hope you will join me in answering their call.

How you can support:

Please go to the following links and sign BOTH petitions --

1. International Declaration for Protection of Democracy and against Forced Dissolution of the Unified Progressive Party (Deadline - Sat, November 22, 2014)

2. Petition to the Supreme Court for the immediate acquittal and release of Representative Lee Seok-ki et al (Deadline - December 31, 2014)

Click here to read an explanation of the Seoul High Court ruling in the Lee Seok-ki et al case.