Petraeus running scared: Veterans drive the General out of LA 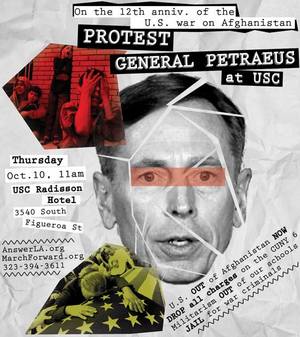 The University of Southern California Veterans’ Association recently announced in an internal email that General David Petraeus, former commander of the Iraq and Afghanistan wars and CIA director, would be holding a private luncheon with student veterans on October 10—coincidentally marking the 12th anniversary of the U.S. war on Afghanistan.

Iraq war veterans in March Forward!, who are also members of the USC Veterans Association and received the internal email, quickly called for a picket outside the event. Momentum grew rapidly, as dozens of individuals and organizations—including ANSWER LA, the Worker Student Alliance and more—endorsed and began organizing for the action.

Within one day of the announcement of the picket, the USC Veterans Association cancelled the event with Petraeus.

Petraeus was recently hired by the City University of New York as a lecturer, and by USC as a veterans’ advisor.

Petraeus is a war criminal according to international law—from ordering and facilitating illegal torture, to intentionally creating civil war in Afghan villages, to covering up the murder of Iraqis by U.S. defense contractors, to utilizing the “double-tap” method where drones conduct second strikes on rescue workers and victims’ funerals. Petraeus’s “leadership” (i.e., trying to advance his own career off the backs of enlisted personnel) also yielded the highest casualty rates for U.S. troops under his command in both Iraq and Afghansitan while he lived a rock star lifestyle.

Despite his known war crimes, Petraeus is raking in the cash from his post-retirement jobs.

In protest of his hiring by CUNY, students and activists held a rally outside one of his classes. Six students who confronted him were violently and unconstitutionally arrested. Now known as the CUNY 6, they were outrageously hit with several charges, including “rioting.”

That protest put Petraeus and CUNY in the public spotlight, highlighting the role of militarism in our schools and the lavish lifestyles of known war criminals. The protest against Petraeus at USC was announced amidst public outcry at his appointment at CUNY and the unconstitutional arrests of peaceful protesters. The second protest at USC, initiated and led by Iraq and Afghanistan veterans, was not the type of publicity USC and Petraeus were looking for. So the brave General ran away scared.

The event’s cancellation is an acknowledgment of the public pressure on Petraeus, and on universities who see fit to have a war criminal teach their students. It is essential to always confront the generals and politicians who sent us to wars based on lies wherever they show their faces.

Despite the event’s cancellation, March Forward! will still be taking action against USC for the outrageous appointment of Petraeus as a “veterans' advisor.” (Details will be announced soon)