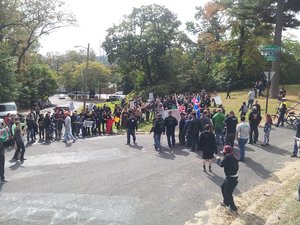 On Oct. 19, area residents, including members of the ANSWER Coalition, stood together in Philadelphia’s Fairmount Park to say no to racism, sexism and anti-LGBT bigotry. They gathered there for a counter-demonstration against a rally organized by the Keystone State Skinheads – a violent, neo-Nazi hate group – which every year attempts to hold a “Leif Erikson Day” celebration at a statue of a Viking explorer located in the park.

While the neo-Nazis attempt to disguise their presence as a cultural celebration, the organization’s history of violent racism and assaults on people of color reveals their true intentions, and they were confronted en route to the statue by a crowd that outnumbered them many times over.

“Racist, sexist, anti-gay – white supremacists, go away!” the protestors chanted, linking arms to stop the advance of the racists. A tense standoff ensued in which police intervened on the side of the skinheads, joining them in breaking the blockade by shoving protestors to the ground.

“The cops and the Klan go hand in hand!” cried the protestors as they regrouped to again block the Nazi’s access to the statue.

Though the racists were able to briefly rally under the protection of the police, their hate speech was drowned out by the ferocity of the protestors chanting “Power, Power, Power to the People!” and they retreated to their cars, signaling victory for those gathered to defend Philadelphia against racism.