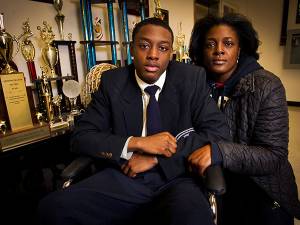 Manning had been walking to a basketball game with his entire team, wearing hats and scarves given to them by their principal to protect them from the cold, when they were approached by police, sending the group running—all except Manning, who felt he had done nothing wrong.

Police allege that they had observed a group of males covering their faces with ski masks, but this is clearly another case of racist profiling by police that has become a common theme throughout the country.

Manning was stopped by a police officer who alleges that he then became violent, but the arresting officer reported no injuries. Manning was then assaulted by a female officer who violently patted him down, grabbing his buttocks and then squeezing his genitals so hard that one of his testicles ruptured.

The people of Philadelphia need to organize against this injustice! From New York to California communities and families victimized by police brutality have joined in fierce fight-back movements against terror by racist police departments. Recent victories, such as the near reversal of the notorious "Stop and Frisk" practice in New York City, shows the value of uniting in struggle.

We need to organize and fight back against this epidemic of police brutality. No more children from our communities should become the victims of vicious cops.

- End all curfew and stop-and-frisk practices!
- Jail the cops responsible for Manning's assault!
- Community control over the police!