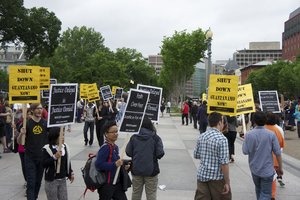 Protesters converged on the White House May 18 for a spirited picket to support the hunger strikers in the Guantanamo Bay prison and demand the immediate closure of this center of torture and indefinite detention. Demonstrators came from many cities, including New Haven, New York, Philadelphia and Baltimore to join the demonstration organized by the ANSWER Coalition, MASFreedom, CODEPINK and several other groups.

May 18 marked the 101st day of the heroic hunger strike that at least 103 of the 166 prisoners at Guantanamo Bay are now participating in. They have been subjected to the cruelest treatment by their captors, who regularly strap down and force feed the inmates in a brutal attempt to break the strike. Eugene Puryear of the ANSWER Coalition emphasized this point to the crowd, saying “Guantanamo prison is recognized all over the world as a torture center. It must be closed. Force feeding the hunger strikers is one more form of torture that the prisoners have endured”.

The protest was joined by Diane Wilson of CODEPINK, a fourth-generation shrimper from the Gulf Coast of Texas who is known nationally for her social justice work, who has been on a water-only hunger strike in solidarity with the prisoners at Guantanamo since May 1. She was joined by John Pope, then on the 6th day of a hunger strike.

The picket highlighted the blatant hypocrisy of the Obama administration, which has so far refused to close the facility and free the prisoners even though the majority of inmates have been cleared for release by the U.S. government. Imam Mahdi Bray of MASFreedom called on President Obama to honor his campaign pledge, saying “We are in front of the White House today to demand that President Obama carry out his promise to close Guantanamo, not sometime in the future, but today”. The protest also drew attention to the fact that the very existence of a U.S. presence in Guantanamo Bay is an affront to the sovereignty of the Republic of Cuba and a relic of the decades of colonial domination of Cuba by the United States.

The May 18 demonstration was an important display of support for the courageous prisoners on hunger strike at a critical moment in their struggle. It showed the determination of progressive people in the United States to fight to close the Guantanamo torture facility, end indefinite detention and stop the imperialist wars they facilitate.