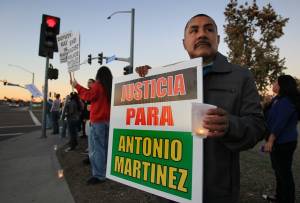 On Dec. 18, 2012 a young man with Down Syndrome was pepper sprayed, beaten to the ground and then kicked by a Vista sheriff’s deputy in North San Diego, California. Antonio Martinez, 21, of Vista was walking to his father’s bakery a few blocks from his house when Deputy Jeffrey Guy attempted to stop him. Guy allegedly believed Martinez to be a suspect in a domestic violence investigation despite Martinez not fitting the description. The only thing Martinez had in common with the wanted man was that they were both Latino. Deputy Guy yelled at Martinez to stop but he put up his hood and kept walking. Guy responded with pepper spray. There were numerous eyewitnesses that described Guy grabbing Martinez by the hood when he was on the ground and repeatedly slamming his face into the pavement. When another office arrived as backup he reportedly drew his gun on those who were trying to help Martinez and said “Get the f*** back or I will arrest everyone here”. During the whole incident Martinez’s sister was shouting to the officers that he had Down Syndrome. They arrested him and then took him to the hospital when they finally admitted he was not who they were looking for.

Guy had recently transferred to Vista from San Jose where he had been under investigation for police brutality. Public response in San Diego County was that of shock and outrage. A few days later the Vista Sheriff’s Department insultingly tried to pacify the family by offering them a Christmas turkey. The family refused. In response to this vile display of brutality the community of North County San Diego led by the North County Coalition of Concerned Citizens and supported by ANSWER San Diego held a protest and vigil on Jan. 19. It was attended by more than 40 people. Some of the chants were “No Justice, No Peace, No Violent Police!”, “Hey Hey Ho Ho, Deputy Guy has got to go!” and “Justice Yes, Turkey No!” This case is not an isolated incident. The Vista Sheriff’s Department is notorious for its violent and racist record. In 2005, they shot three unarmed Latino youths in the back, killing them. A few years later they hog-tied two African American men and beat one while he was tied. The list goes on. Protesters demanded the immediate firing of Guy although no action whatsoever has been taken.  Racist police brutality must end and ANSWER will be in the street every time the police harass, brutalize or murder one of our sisters and brothers!