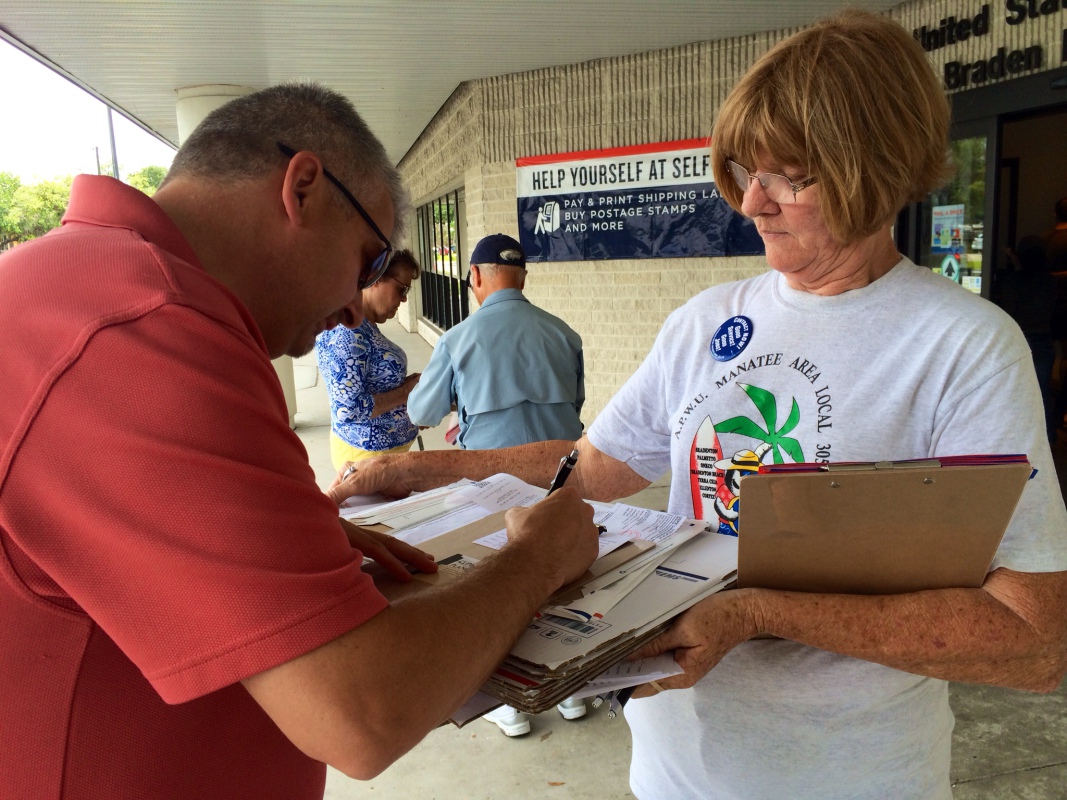 On May 14, the American Postal Workers Union and supporters around the country held a national day of action to raise awareness about corporate attacks on the U.S. Postal Service. In Bradenton, Fla., workers and community members participated at the Braden River Branch Post Office.

Recent attacks on the Postal Service have been severe. Overnight delivery of first-class mail has been virtually eliminated and all mail throughout the country is being delayed. Mail processing facilities are being closed at an alarming rate and retail work is being privatized. Post offices suffer from chronic understaffing and delivery services are being curtailed.

Deborah Smith, now retired, proudly served in the Postal Service for 29 years. On Thursday, she and others collected signatures on post cards to send to Post Master Margaret Brennan, letting her know that the U.S. public doesn’t want any more closures of processing plants or associate offices. They also passed out APWU literature correcting misinformation spread by politicians and corporate news media.

As the APWU explains, the Postal Service isn’t broke. In fact, it had a surplus of $1.1 billion in the first quarter of fiscal year 2015, $1.4 billion in fiscal year 2014 and $600 million in fiscal year 2013. The USPS financial difficulties are the result of a congressional assault. The 2006 Postal Accountability and Enhancement Act  places financial burdens on USPS that no other public or private entity must make. Costing USPS approximately $5.5 billion per year, the PAEA is a pretext for cutting service and paving the path to privatization.

Liberation spoke to Deborah Smith about the many issues surrounding the fight to save USPS.

Smith explained how the slowdowns will affect people’s everyday lives in significant ways.

“It’s not just, ‘Okay, now I got to drive an extra mile to the post office.’ It’s a domino effect. For instance, most people can now look at their statements they receive from their car payments, their mortgage payments, and see that [banks and corporations] actually added a post note on there that you now need to mail that check to them three to five days earlier to make it on time. Well, people on fixed incomes, they’ve always had a window of time to get it there. They don’t have that window anymore. So now they’re looking at bounced checks, late payments, bad credit history,” said Smith.

Smith delved deeper into the reasons for attacks on USPS. Discussing the nation’s infrastructure, she explained how the interests of public and
private businesses are fundamentally at odds, with the former being about service and the latter based on profit.

“The American public owns the Postal Service. Nobody profits. We get a wage, that’s it. Whereas, Pitney Bowes [and other shipping and mailing companies], they have CEOs, all of this. They’re going to make profits. So, yeah, they’re wanting their business. They’re wanting this. But the thing is, when they get it, when it does become privatized —and that’s where it’s headed, unfortunately—your service is going to drop. And instead of me being able to send a letter from here to Fairbanks, Alaska for 49 cents, I’m going to have to spend two dollars,” she said.

Smith told Liberation how services would suffer and why prices would increase if USPS were to be privatized.

“These private companies are out to make a dollar, they’re not concerned with whether you get service or not. The more that these little things happen— this post office gets closed or that processing plant gets closed—that puts more fuel into the arguments of these people who are trying to privatize it and take it away. The next thing you know, it’s just like when you walk into Home Depot. You used to have ten cashiers. Well, now you have three cashiers and all these little kiosks that you can sit there, do it yourself. You lose your service. It’s just a shame.

“You’re always going to have attrition in anything that gets mechanized, anywhere from automobiles on up. We don’t have a quarrel with that. What we don’t want to see happen is the Postal Service to be done away with and privatized. We understand attrition, we understand downsizing and all of that. But we do have a problem with them just closing it down carte blanche just to try to get it privatized,” said Smith.

“With privatization, just like with every other service that’s privatized, from the phone companies to the electric companies to the cable companies, the service deteriorates and it gets more expensive. That’s the main thing. For instance, right now, UPS doesn’t deliver that last mile because it’s too expensive for them, so they pay us a small fee to do that. We do it because it’s more revenue for us. But, bottom line, if they take over the Postal Service, they’re going to have to deliver that last mile and they’re going to charge you for that last mile. A lot more than what we were charging. We were charging 20 cents a package. They’re going to charge you two or three bucks.”

Postal workers could be negatively impacted even more, explained Smith, and this in turn could devastate the communities where they live.

“The workers themselves, like with Manasota if they close that plant, right now we have in our contract that six years on the job you’re guaranteed a job somewhere. Our last contract, that had to be within fifty miles. Before we had that clause, when the plant closures first got started in early 2000, we had people in Memphis, Tennessee being shipped down to the Florida Keys if they wanted a job. Well, that takes their whole family, takes the kids out of school, that takes the income out of that community. They had to sell their house just like when the car industry went down. Detroit City, Dayton, Ohio, we got all these factory towns that are now ghost towns.

“If Tampa closed down, you’re talking 3,000 employees up there. That’s a big hit. They would possibly be out of work or relocated somewhere else. That’s going to hurt that economic center right there. Those people are going to be moving, they’re not going to be shopping in their little stores anymore, going to their gas stations. So again, the domino effect. In some areas it can be literally devastating. Not to mention the emotional strain on people. A lot of people end up divorced, separating from their families,” said Smith.

“Being unionized, you have a security. They can’t just walk in and say, ‘You’ve been here five years, you’re at this pay bracket, I can hire two people in to replace you cheaper,’ and let you go for no reason. With the Postal Service, they got to have a reason. We have an option to make them explain that reason. You get into the private sector, you’re going to be earning less money. That’s a given across the board. You’re going to have less money. And you’re going to have less security.”

Smith has seen the siege on the U.S. Postal Service since the 1980s and is hopeful that the Postal Service can be saved. However, she believes that it will take more awareness about the decades-long war on public services waged by greedy billionaires.

“I started in 1985. I hadn’t been on the workman floor maybe two weeks, and a supervisor came up to me and said, ‘I don’t know why you bothered to take this job, we’re going to be privatized in five years.’ I said, ‘I hope not, I got a family to support here.’ So I’ve been hearing that since 1985. Corporate moguls, the Koch Brothers, people like that who already have gazillions of dollars anyway but they want a few more, are pushing these congressmen and getting people elected who don’t understand the system. They want to make a fast buck. They’re chipping away [at public services] and getting people acclimated to it so they can go in and take the full swoop, take the money and run. We have to look at the history of the United States before it’s too late.”