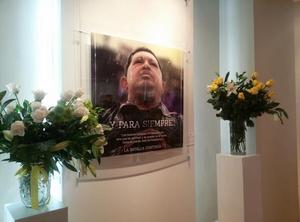 The following report was published by the Embassy of the Bolivarian Republic of Venenzuela in the United States. Members of the ANSWER Coalition attended the event to honor the late President and affirm our ongoing solidarity with the Bolivarian Revolution.

As part of the commemoration on Sunday, July 28, of the 59th anniversary of the birth of the leader of Venezuela’s Bolivarian Revolution, Hugo Chávez Frías, the Embassy of the Bolivarian Republic of Venezuela in the United States held a mass at the Our Lady of the Americas Parish and a photo exhibit at the Bolivarian Hall, the Embassy’s cultural space in Washington, DC. Both activities were attended by authorities, members of the diplomatic corps, and admirers of the ideals and actions of the late President in favor of social justice.

The photo exhibit, entitled “Chávez: Sowing the nation, reaping revolution” (“Chávez, siembra de patria, cosecha de revolución”), which is on display until December, was launched in the afternoon by Soraya Bracho de Ortega, the wife of the chargé d’affaires of the Venezuelan Embassy, Calixto Ortega, who was attending commemorative events in Caracas. Mr. Ortega did however address the event by telephone, thanking those who attended for coming to the exhibit and remembering the legacy of President Chávez.

The exhibit recalled Chávez as a man, a communicator, a father, and also the father of a nation who promoted the struggle for regional integration and the reassertion of sovereignty over the country’s oil reserves.

Also that afternoon, a mass honoring the late Venezuelan leader was held at Our Lady of the Americas Parish and attended by officials including Venezuelan Ambassador to the Organization of American States Roy Chaderton Matos, who thanked Father Evelio Menjivar for officiating.

Meanwhile, the consulates of the Bolivarian Republic of Venezuela around the United States held various activities to celebrate the 59th anniversary of Chávez’s birth. In New York, a selection of photos and posters of Chávez was displayed as well as a set of paintings of Venezuela’s 19th century independence leaders, and a concert of traditional llanera music was offered along with courses on Venezuelan cuisine and the instrument known as the cuatro.

With these activities, the Venezuelan Consulate in New York celebrated the birth of the leader of the Bolivarian Revolution and also the 230th anniversary of the birth on July 24 of the Liberator, Simón Bolívar, in a day filled with internationalist spirit. Consul General Carol Delgado said: “our great supreme commander Hugo Chávez has been, among many other virtues, the best history teacher that life could have given us. He breathed life into the thinking of Bolívar, and reconnected us with his three revolutions: the anti-colonial revolution that liberated six nations, the social revolution that abolished slavery and brought women and mixed race individuals into the independence struggle, and the revolution to unite Latin America. And all the while, he alerted us of the risks that empires and powerful nations posed to our republics.”

Reprinted from the website of the Embassy of the Bolivarian Republic of Venezuela in the United States. Click here to read the original posting.