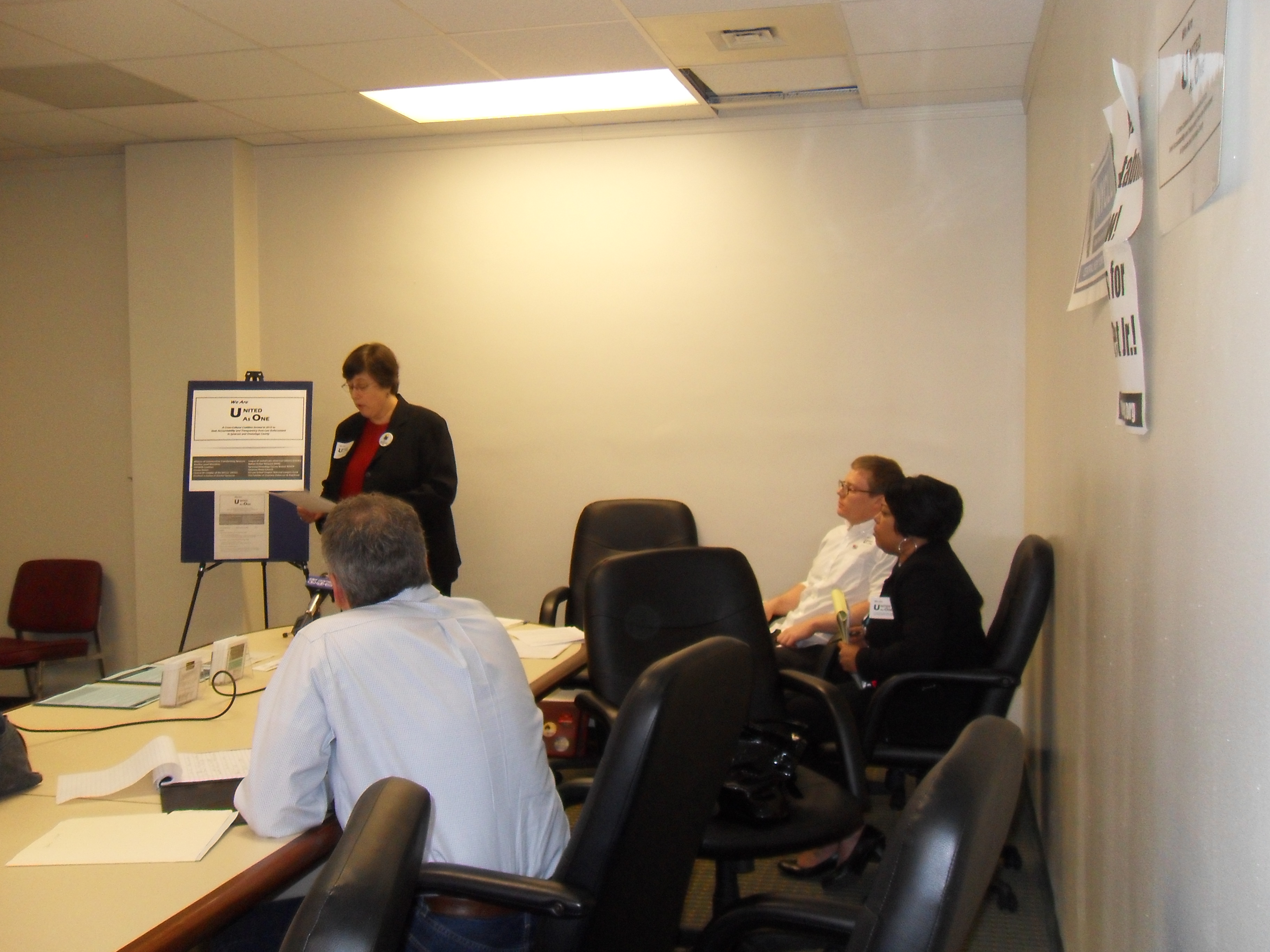 Barrie Gewanter of the NYCLU emcees the press conference.

A broad coalition of community groups known as the United as One Coalition (UaO) held a press conference today where they demanded the release of the New York State Commission on Correction’s report regarding the death of Raul Pinet Jr. at the hands of the Onondaga County Sheriff’s Department.

The ANSWER Coalition is a founding and active member of UaO, along with the NAACP, CNY chapter of the NYCLU, League of United Latin American Citizens (LULAC), Disabled in Action, National Action Network, and others.

Raul Pinet Jr. died on Aug. 6, 2010 at the Onondaga County “Justice” Center. Raul was beaten brutally by Syracuse police, and thrown face-first down a flight of concrete steps, on Shonnard St., in the Near Westside neighborhood. Raul was arrested on charges of “criminal trespass” even though he was invited onto the property on which he was arrested. Raul was thrown into a prisoner transport van and taken to the local jail.

As Raul was being thrown into the van, he was screaming “I don’t want to die!”

Raul was taken to the jail, stripped naked, restrained and placed in a holding cell. Sheriff’s deputies in the jail left him faced-down, and Raul suffocated to death.

Barrie Gewanter, CNY Director of the NYCLU, opened the press conference that included multiple representatives from print, online, radio, and TV news. Gewanter told the reporters “In April it will be more than a year and a half since Raul’s death, yet we have heard nothing from the CoC about the results of the investigation.”

In another case of law enforcement brutality and neglect, Chuniece Patterson was killed at the jail in Nov. 2009. It took the CoC only six months to release the damning report on her death.

Next, Luz Encarnacion, President of LULAC, spoke about the effect of Raul’s death on the predominately Latino community on the Near Westside. Encarnacion said that, “After Raul’s death, the people there don’t have trust in law enforcement.”

Encarnacion continued, stating that “There must be justice for what happened to Raul… Changes must be made to make sure nothing like this happens again.”

Finally, Derek Ford, representing the ANSWER Coalition spoke. Ford demanded the release of the CoC report. He questioned the reasons for the delay in its release. “We know that Sheriff’s deputies were asked by administrators to rewrite their reports about what happened the day of the incident. Why?” he asked. “Is it customary or uncharacteristic for custody staff to be directed by administrator’s to rewrite and then resubmit reports after an incident involving the injury or death of an inmate?”

Ford continued, “We want to ask: Does this have anything to do with the delay in releasing the report?”

Throughout the past six months, UaO leaders have inquired into the report on Raul’s death. Each time they were told that “the report will be released soon.” Each time there was only silence.

The Pinet family needs the report in order to continue their wrongful death suit against the County. The community has a right and a need to know what is contained in the report. We need to know what steps the Sheriff’s department has taken to ensure that there are no more deaths in the jail. Furthermore, we have a right to know any and all causes for the delay in the release of this important information.

The ANSWER Coalition, NYCLU, and LULAC have each written a Freedom of Information Request to the NY State Commission of Correction. These FOIL requests are being mailed today, in advance of the release of the report, to ensure that we obtain the information contained in the report immediately so that we can continue working for justice.