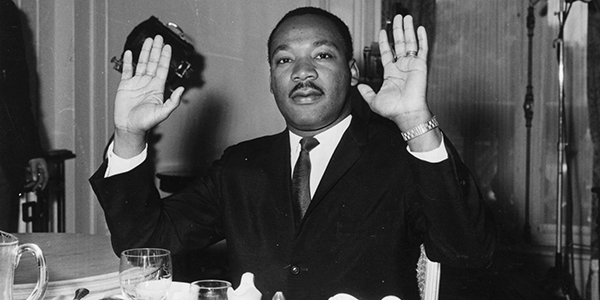 The ANSWER Coalition has joined with many others who have proclaimed that this year's Martin Luther King Jr. holiday weekend will be a time for protest and resistance, and are organizing dramatic street actions throughout the country.

On Jan. 15 -- Martin Luther King Jr.'s actual birthday -- activists in New York City took the message into the subways and on to the trains. In Washington, D.C., DC Ferguson organized a “Shut Down Downtown” march during morning rush hour. In Chicago, there was a Reclaim MLK Day and in Newark, N.J., airport workers organized by SEIU 32BJ stood up for their rights.

More is still to come! In cities across the country, there will be speak-outs, visibility, outreach and contingents in Martin Luther King Jr. parades and walks continuing through Jan. 19.

This country needs a sustained nationwide movement against racism and police terror.

The political establishment, from the White House to City Halls everywhere, will evoke Dr. Martin Luther King’s heroism and his “I Have a Dream Speech” as a way of legitimizing the tradition of dissent in U.S. history. Yet for the millions who have taken to the streets in reaction to the growing national movement against racist police terror, the words and legacy of Dr. King carry a different meaning.

Having his life threatened by the FBI and finally being assassinated by the most reactionary elements in the United States, Dr. King was known in his later years as a staunch critic of the U.S. economic and political system that forced upon the Black nation poverty and violence, yet preached “liberty” and “democracy” abroad.

Dr. King said, “I am convinced that if we are to get on the right side of the world revolution, we as a nation must undergo a radical revolution of values. We must rapidly begin — we must rapidly begin the shift from a thing-oriented society to a person-oriented society. When machines and computers, profit motives and property rights are considered more important than people, the giant triplets of racism, extreme materialism and militarism are incapable of being conquered.”

Today, after the killings of Mike Brown, Eric Garner, Tamir Rice, Akai Gurley, Rumain Brisbon, Ezell Ford and so many more – all racist police killings of unarmed Black men who have received no justice by the same system Dr. King condemned years ago – the growing movement against racism and police terror can reclaim the radical tradition of one of the key figures of the civil rights movement.

Across the country, the ANSWER Coalition and scores of other national and local organizations are taking part in speak-outs, actions on public transportation, contingents in parades and more demanding “Stop the War on Black America” and “Stop Racist Police Terror.”

Take the Movement onto the Trains on Dr. King’s Birthday
Thursday, January 15
All Day
All over the city!
Click here to read the Call to Action, learn additional details and RSVP