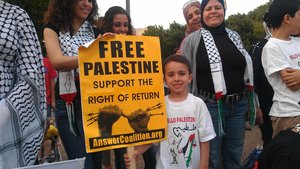 Protestors outside the White House

On May 15, dozens of Palestinians, activists and supporters gathered at the White House to commemorate "Nakba Day," or the 1948 occupation of Palestine by Zionist military forces. "El Nakba" is the Arabic word for "the catastrophe." It is commemorated on the same day that the State of Israel celebrates its "independence day."

Nakba Day serves as a reminder of the approximately 800,000 Palestinians (3/4 of the population) who were murdered or made refugee by the Zionist campaign of terrorism and occupation. Over 600 villages were destroyed. The Nabka created the Palestinian refugee crisis that exists today with over 10 million Palestinian refugees living scattered around the world. This includes internally displaced refugees who live within historic Palestine, amounting to about half of all Palestinians living there if not more.

The protest was organized by Students Against Israeli Apartheid at George Mason University and joined by supporters including the ANSWER Coalition, Code Pink, American University Students for Justice in Palestine, the International Socialist Organization, the U.S. Campaign to End Israeli Occupation, Jewish Voice for Peace, the D.C. Palestine Film Festival and others. A representative from the Palestinian project "Zochrot" attended the rally. Zochrot organizes education on the Nakba and commemoration pilgrimages to all of the Palestinian villages destroyed in 1948 and subsequently.

Families from around the D.C. metro area traveled to the White House for the rally to chant, hold flags and signs and light candles for those murdered and displaced. The rally focused on organizing solidarity with Palestinians in Palestine struggling for independence and self-determination. It called out the Obama administration for continuing to support the occupation with billions of dollars in military aid. It demanded the unconditional right of return for all Palestinians.