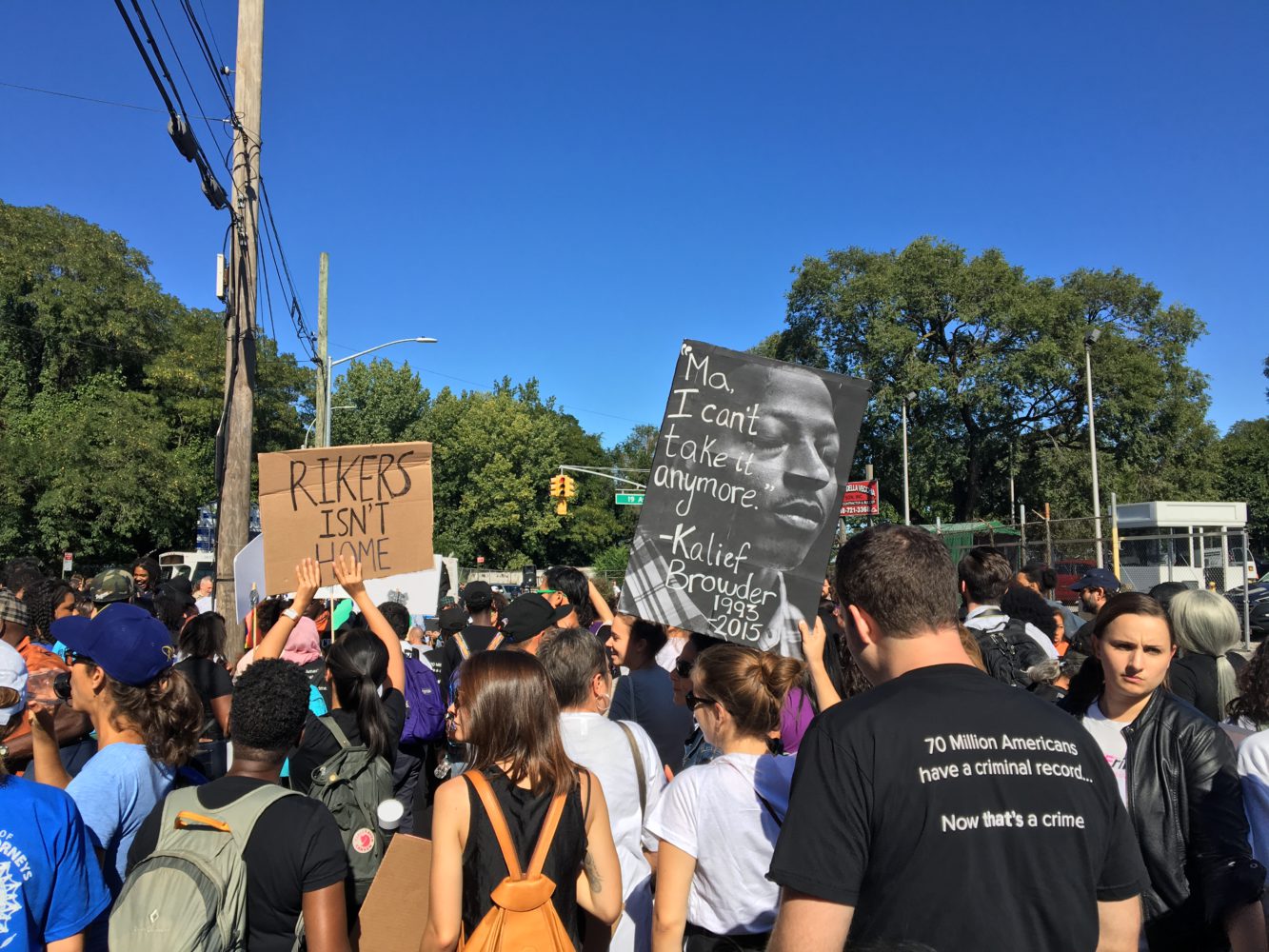 On September 25, hundreds of community members and activists marched through Queens to demand the closure of Rikers Island, an infamous detention center known for its flagrant human rights abuses.

Glenn Martin, one of the main organizers and a former Rikers detainee himself, told the crowd, “The people closest to the problem are also closest to the solution.” Most community members who have been sent to Rikers or are in some way connected to the center know that it cannot be reformed; it is rotten to the core. Martin said the so-called reforms brought about under Mayor Bill De Blasio are akin to putting lipstick on a pig. Unsurprisingly, De Blasio declined an invitation to speak at the rally.

The very idea of a detention center devoted to locking up and terrorizing local youth, men and women who have not even been convicted of a crime is abominable. In a blatant violation of inmates’ basic rights, solitary confinement is used against inmates, even ones who later face no formal charges. Kalief Browder, a teenage inmate subjected to the torture of solitary confinement, took his own life after being released; no formal charges were ever pressed against him.

Daniel Dromm, a City Councilor representing District 25, Jackson Heights and Elmhurst stated, “Rikers Island is a hellhole. No man deserves to live in that hellhole.” Rikers Island is indicative of the United States’ approach to “criminal justice” as a whole: warehouse supposed criminals out of the public eye, throw them into a violent prison environment, punish them for the violence through terrorizing inmates with solitary confinements and other abuses meanwhile doing little to address the root causes of crime.

Whether it’s petty crimes such as shoplifting or drug misuse, the “justice” system seeks nothing but revenge. Instead of allocating roughly $200,000 to detain each inmate at Rikers, communities could use that money for expanding institutions that actually help the community: public schools, jobs and affordable housing to start. As always under capitalism, the government somehow has enough money to detain and terrorize poor people but never enough to make the communities in which they reside genuinely safe and livable.

Martin brought up some pertinent history during his talk; it’s no coincidence that Rikers Island is named after slave owners. The same class that enslaved Black people a century and a half ago now uses its power to discipline, punish and terrorize the descendants of slaves. Today, approximately 89 percent of the inmates at Rikers are Black or Latino. These figures are wildly disproportionate when it comes to the actual demographic composition of our community as a whole. On top of the obviously racist nature of the detention center, 79 percent of inmates are awaiting trial, meaning the vast majority of the inmates at Rikers are supposed to be considered innocent in the eyes of the law.

The march comes on the heels of the largest prison strike in recent history, where thousands of prisoners righteously protested their conditions of degradation and exploitation. While the 13th amendment legally abolished slavery, it explicitly excluded the prison population. Prisoners today are forced to work for paltry wages and are charged exorbitantly high fees for basic goods within the prison.

The demonstration was an excellent affirmation of the connection between reform and revolution. When we unite our communities and fight for direct changes in the here and now, we can win. Shutting down Rikers Island is not a pipe dream. The jail’s population has been more than halved since Glenn Martin was first detained. At the same time, we know that closing Rikers Island will not solve the crises that buttress mass incarceration: underfunded public schools, chronic unemployment, a military-style occupation of communities of color by the police and the entrenched system of white supremacy. Only revolutionary change will be able to address these root causes completely. We need a system where criminalizing poor youth and imprisonment without trial is inconceivable. We need socialism, where poor and working people call the shots instead of cops, landlords and bankers.