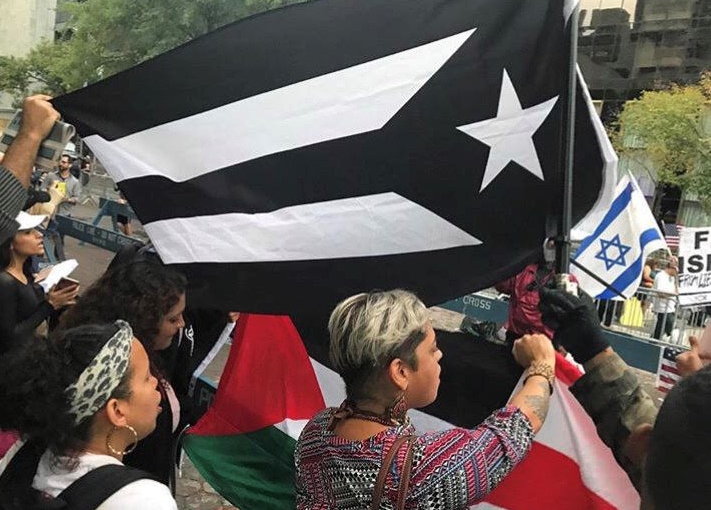 On Sept. 19, a multinational group of 100 activists gathered across the street from the United Nations in midtown Manhattan to demand that the 72nd General Assembly address the colonial status of Puerto Rico.

In June, the UN Special Committee on Decolonization passed a resolution calling for the independence of Puerto Rico and an end to US colonization of the island. The resolution brought some attention to the crisis in Puerto Rico, but no further action can be taken until the General Assembly, which began its session this month, includes it on their agenda.

Most recently, the devastation of Puerto Rico by hurricane Maria has deepened the economic and political crisis in this US colony.

“The United Nations has an obligation to uphold its own resolution…there have been 36 resolutions passed so far by the Decolonization Committee on Puerto Rico, but those resolutions haven’t been brought to General Assembly,” said Camilo Matos, a member of the New York chapter of the Puerto Rican Nationalist Party and a convener of the People’s Congress of Resistance. “Of course the most important struggle is on us, the Puerto Rican people. The people will liberate themselves, but we need to let the United Nations know they have a job to do,” said Matos.

Organizers from groups including the Patrido Nacionalista de Puerto Rico, the Oscar-Mandela Committee, Acción Nacional Boricua, Prolibertad, COMBO, and the People’s Congress of Resistance endured the wind and rain from the early hours of the afternoon until sunset to get their message heard. The Boricuas were joined by a large group of Palestinian activists in an inspiring show of anti-colonialist solidarity. A small group of from the reactionary Jewish Defense League and some Trump supporters heckled the crowd with racist and anti-immigrant chants and signs, but their voices were quickly drowned out.

The multinational crowd began a march to Trump Towers, chanting, “From Puerto Rico to Palestine, occupation is a crime!” and “Que viva Puerto Rico y Palestina libre!” As usual, the New York Police Department was out in full force with upwards of a 100 cops with motorcycles, and police vans lining the street. The heavy police presence inhibited the dwindling march
from reaching Trump Tower, but the message of internationalist solidarity and anti-colonialism was loud and clear.

Puerto Rico drained of its wealth

The United State’s exploitative economic policies and centuries of colonialism has drained the island of its wealth. Currently, 45 percent of Boricuas live below the poverty line and 40 percent of households with minors rely on food stamps.

Last year the U.S. Congress passed the Puerto Rico Oversight, Management, and Economic Stability Act. This thinly veiled act of old school colonial rule created a fiscal control board to manage Puerto Rico’s budget, laws and finances without being accountable to the island’s government. This board imposed on Puerto Rico is managing payment of the $72 billion debt
Puerto Rico owed to banks and hedge funds through major cuts to public goods, welfare and pensions, by shutting down services, and by lowering the minimum wage to those under 24 to a mere $4.25 an hour.

The economic crisis in Puerto Rico has been further exacerbated by the destruction caused by Hurricane Maria. The government there was astonishingly underprepared to handle the devastation brought on by a category 5 hurricane. As of this writing, the entire island is without electricity, and it will take up to 4-6 months to restore power in many areas. Cell phones are useless, most of the water is undrinkable, and roads are blocked with debris.

Many feel that, with or without a UN resolution, the struggle to end U.S. colonialism in Puerto Rico has reached a tipping point.