Protest the Hobby Lobby decision and attacks on women’s rights 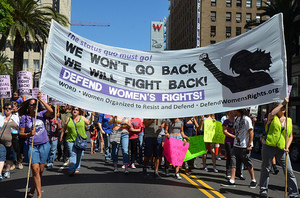 The Supreme Court has shown itself to be the enemy of all women. The decision in Burwell v. Hobby Lobby constitutes an immediate attack on women’s health and reproductive rights. The Court is one more weapon in the arsenal of the right-wing, anti-woman bigots who would deny women the right to control our bodies. This is part of a larger set of attacks over the last few years that intend to destroy the rights women won through militant mass movement in the 1970s.

The Burwell decision enshrines the totally unscientific religious beliefs held by owners of a corporation as highly valuable, while denying the healthcare needs of the women workers of the corporation. Because the Green family that owns Hobby Lobby believes—despite thoroughly researched scientific evidence—that life begins at conception, and the morning after pill and IUD prevent conception, the Supreme Court has declared that Hobby Lobby shouldn’t have to comply with the Affordable Care Act coverage of those forms of birth control.

No employer should have the right to deny women their rights to make decisions about their health and well-being, including their reproductive health. The misleading words “closely held” are used by the court to describe Hobby Lobby, but in reality obscure the breadth of their decision. Hobby Lobby is not some small family-owned, religious-based business. It is a giant crafts store with 500 outlets and 16,000 employees. Not one of those 16,000 workers should have their health decisions undermined or negated because of the owner’s beliefs.

The ruling that a corporation should be protected as if it were an individual—even though corporations are also protected from individual liability—and that the owners’ religious beliefs allow them to flout the law leads down a slippery slope of bigoted and hate-based politics. This constitutes a dangerous claim that corporate owners and bosses can use to carry out any number of racist, sexist, anti-LGBTQ, bigoted policies against workers based on their gender, nationality, sexual orientation, gender identity and expression.

WORD categorically rejects the idea that the five rich men, four of whom are white, who wrote this decision have any legitimate say over women’s reproductive rights. The Supreme Court did not grant reproductive rights as a gift in 1973. They were conceded as a response to a mass movement of women in the streets who would not back down.

We must build that movement yet again and say, “We won’t go back!” Join us in the streets this week demanding: Stop the war on women’s rights! Free, safe, legal abortion on demand!

Actions are already being planned across the country (see below for a detailed list). If you are not in a city where there is an action planned, we encourage you to gather your friends and hold a speakout or a banner at a local Hobby Lobby or busy corner. Contact WORD at [email protected] so we can post your plans and encourage others to join each of us where they can. We are building a nationwide movement of women and their allies to fight back against the right wing. Join us!

Join WORD on July 3-13 in a city near you or call an action in your city and add it to the list! Events are being added every day!

Email us at [email protected] to add details of your event!