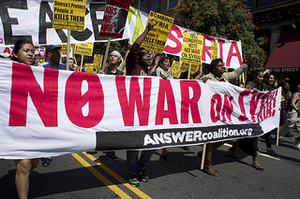 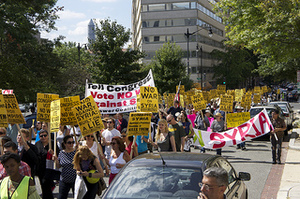 Two days before Congress is set to begin debating whether or not to authorize an attack on Syria, over 500 people gathered from across the East Coast Sept. 7 to demand an end to the drive to war. Organized by the ANSWER Coalition (Act Now to Stop War and End Racism), the protest was supported by a wide range of organizations including Code Pink, United National Anti-war Coalition and the All-African People’s Revolutionary Party. The demonstration served as a powerful show of force by a public fed up with Washington and Wall Street’s wars of aggression.

The protest began with a large picket in front of the White House, which was greeted with support by many of the thousands of passers-by. Marchers expressed a range of motivations for attending. Lugo, a participant at the demonstration, expressed his opposition to all wars, “[U.S. Marines Maj. Gen.] Smedley Butler said war is a racket, and that’s all it is.” Others joined spontaneously. Lindsay, who was visiting from Seattle, heard chants against war on Syria and joined the picket because “There is no reason for the United States to meddle” in the civil war in Syria.

For others, the specter of a U.S. intervention had grave personal significance. Amal Esmail, who grew up in Syria and now lives in Virginia, expressed her outrage at the sectarian politics of the anti-government rebels. “The opposition made everyone hate each other,” Esmail said, adding that it was extremely hypocritical for the U.S. government to make allegations about the government’s use of chemical weapons when they ignored strong evidence earlier in the conflict suggesting that the opposition used these deadly munitions. Robert, a resident of Washington D.C., who has family in Lebanon, also deplored the persecution of minorities by the opposition and added that U.S. war on Syria “would be a disaster for Lebanon.”

Yasmina from Washington, D.C., highlighted the role of the U.S. government in instigating the civil war in Syria, “They [the U.S. government] started the civil war as far as I’m concerned.” Sara from Virginia also voiced support for the Syrian people’s right to self-determination, saying, “We have no business in Syria” and added that she has “yet to hear a legitimate argument” in favor of intervention.

After speakers energized the crowd outside the White House, protesters marched towards the Capitol Building, receiving an enthusiastic response from onlookers along the route. Although police tried to block the progress of the march and prevent speakers from making their voices heard at several locations, the crowd pushed on and forced the opponents of free speech to back down.

Actions against war on Syria are continuing on a daily basis in Washington, D.C., and across the country. On Monday, Sept. 9, the Syrian American Forum is calling for opponents of war to gather at the White House at 10:00am for another important protest. The opposition to U.S. intervention in Syria expressed in countless opinion polls, petitions and calls to congressional offices were amplified in the streets Sept. 7. The message was clear: Congress, vote NO to war on Syria!