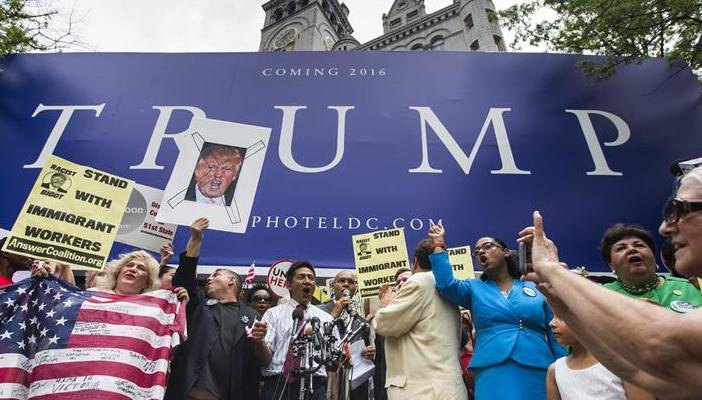 Protest outside the Trump Hotel the day it opens on Pennsylvania Avenue in Washington, D.C.!

Bring your own sign and let the world know what you think!

From the very beginning of his campaign, Trump has served as a lightning rod for bigotry against Mexicans, Muslims, the Black community, immigrants, refugees, women and people with disabilities. He has scapegoated the most vulnerable communities for the declining social and economic conditions facing working people in the United States and portrayed himself as some strongman billionaire savior for those who have been left behind. But just yesterday he gave a speech that showed he is just another servant of Wall Street, unveiling his economic agenda to reduce taxes and regulations for the Fortune 500 corporations.

Trump’s inflammatory language has won him the endorsement of former KKK leader David Duke, and led to a surge in far-right rhetoric and violence in different parts of the country — including at his own rallies. He has stripped the press credentials of reporters who criticize him. His security team has physically assaulted protesters standing in public spaces. He repeatedly pledged to legally defend anyone who attacked anti-Trump protesters, recalling the “old days” when “they would be carried out on a stretcher.”

The Partnership for Civil Justice Fund has filed two lawsuits regarding the “deals” reached by federal and District of Columbia officials with the Trump Organization that appear to have given Trump a “buffer zone” from protest around his hotel on Pennsylvania Avenue, one of the country's most historically significant sites for free speech and public assembly — America’s “Main Street” and a vital space for free speech.

His new luxury hotel is set to open on Monday, September 12, after years of construction in the historic Old Post Office, a federal building on Pennsylvania Avenue. The hotel, which is offering $500,000 suite packages for the Presidential Inauguration in January, has already become an eyesore with its obscene, enormous “TRUMP” sign out front.

While Trump's campaign is based on division, his bigotry is also uniting many different communities — against him — and leading to a resurgence in protest activist. We will continue to protest him wherever and whenever he speaks.

Want to endorse this action?