ANSWER Coalition joining protests at the DNC and RNC 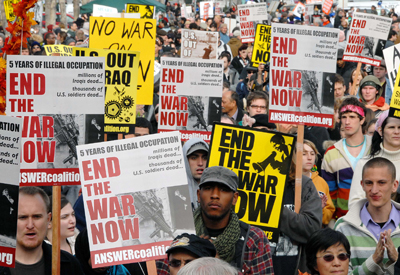 The ANSWER Coalition will be present at a wide range of protest activities taking place during both the Republican National Convention in Cleveland, Ohio, July 18-21, and the Democratic National Convention in Philadelphia, Penn., July 25-28. Organizing is well underway in both cities, and this page will be updated once event specifics are finalized.

For the last seven and a half years, the Democratic Party has blatantly ignored its anti-war campaign promises and in fact expanded U.S. wars of aggression. In Honduras, Libya, Somalia, Yemen, Palestine, Syria, Iraq, Afghanistan, Pakistan, the Philippines and so many other countries, U.S. imperialism has inflicted tremendous suffering under a Democratic president. Racism and police brutality persist in all the big cities of the country, despite the fact that these are virtually all run by Democratic Party machines.

While the Democrats try to apply some window dressing, the Republicans are the open party of war and hate. In Cleveland, they will coronate Donald Trump, who has energized the extreme right wing with his unabashed racism. In solidarity with immigrants, Muslims, women and so many others who have been the focus of his bigotry, we will march on the RNC to shut him down.

Many events are being organized, and a full listing of actions ANSWER will be participating in will be posted shortly. We especially want to highlight the following action:

During the DNC: Demand freedom for political prisoners!