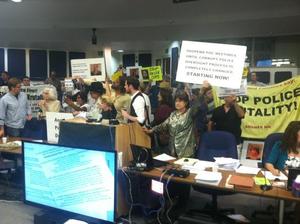 Protesters take over the City Council in Albuquerque, N.M. on May 5 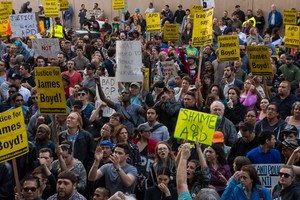 On May 5 anti-police brutality activists and community members in Albuquerque effectively shut down the City Council meeting and reconvened it as a People’s Meeting, a truly unprecedented event in the recent history of Albuquerque.

In this planned, organized act of non-violent civil disobedience, nearly 50 protestors massed at the podium during public, comment carrying banners and signs. Protester David Correia read a statement demanding justice for the families of victims, the indictment of officers involved in shootings and the disarmament and immediate termination of all officers with a record of brutality, among other demands.

In the decades-old tradition of the Albuquerque anti-police brutality struggle, an arrest warrant was then issued for Albuquerque Police Department Chief Gordan Eden as an accessory after-the-fact in the murders of James Boyd, Alfred Redwine, Mary Hawkes and Armand Martin—all killed during Eden’s three-month tenure as chief.

A new movement is born in Albuquerque

The outbreak of a massive people's movement against police brutality and police killings broke out in Albuquerque six weeks ago following the APD’s videotaped killing of a homeless and mentally ill man, James Boyd, for “illegal camping.”

After APD's cold-blooded murder of James Boyd, ANSWER New Mexico organized an emergency demonstration of well over 1,000 protestors, who marched to APD head quarters demanding justice for Boyd and that the shooting officers be indicted and charged with murder. The Albuquerque Journal, the most widely read local paper, described the protest as “by far the largest of its kind in Albuquerque in recent memory.”

Weeks of mass demonstrations and community organizing eventually forced the federal government to intervene. The Department of Justice scrambled to publish the results of a 16-month-long investigation into APD’s pattern of brutality. The DOJ report was damning and defined the APD as a department that engages in the routine unjustified use of lethal and non-lethal force.

A significant number of police killings in Albuquerque involve persons with mental illnesses who are in crisis. Between 2010 and 2011, the New Mexico Public Defender Department found that nearly 75 percent of those shot by police suffered from mental illness.

The response of APD to the new protest movement and the scathing DOJ report has been to kill three people in six weeks—in other words, to increase the number of shootings and killings, while stonewalling the release of information to the public about the killings. At a press conference following the killing of a homeless teenager, Mary Hawkes, on April 22, Chief Eden announced that video from the shooting officer’s lapel camera could not be “extracted.” When pressed by media about the reason why, he refused to answer.

The APD has defied all attempts by the community and local political establishment to curtail their heinous pattern of violence.

The growing perception that all formal avenues of petitioning for justice have proven ineffective in either combating or curtailing the hardcore racist APD—who have in fact gone on a murder spree since the protest movement began—led activists to employ the tactic of civil disobedience.

After the people’s arrest warrant for Chief Eden was read, protestors announced that they would not relinquish control of the meeting until Albuquerque Mayor Berry, who has turned his back on the issue of police brutality all together, showed up to hear the people’s demands.

Amid chants of “Arrest Gordan Eden!” and “Fire Mayor Berry” a contingent of officers quickly surrounded the chief and whisked him away. With the breakdown of chamber decorum and protocol, City Council members left smoke behind as they raced for the door, with the exceptions of Councilman Garduno and Councilwoman Pena, who were the last to leave.

Activists and community members then occupied the vacant seats of the City Council and, after reconvening the meeting as a People’s Meeting, presided over several votes of no-confidence in the police chief, the mayor, and the mayor’s top administrator. The person in the council president's chair was the 11-year-old son of a union organizer.

The police were wholly unprepared and after assessing the number of determined people engaged in civil disobedience, and with the media everywhere, made the tactical decision to make no arrests.

The People’s Meeting was called to a close in an orderly fashion with the announcement of plans to organize an historic civil rights demonstration in the city of Albuquerque.