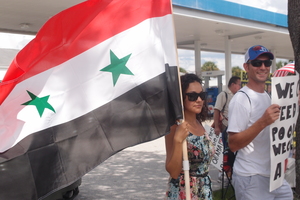 Since the U.S. bombing of Syria began less than two weeks ago, people have been taking to the streets in emergency demonstrations called by anti-war forces across the country. The night the bombing began, the ANSWER Coalition released a statement condemning this latest act of aggression and calling for a week of action.

On Sept. 27, opponents of U.S. war gathered in Tampa down the street from MacDill Air Force Base, where President Obama visited the prior week for a briefing on the wars in Syria and Iraq from Central Command. Activists came from all over the Suncoast. Public support for the demonstration was huge, as people driving by honked and waved continuously for two hours. People chanted “No more war! Feed the poor!” and held signs saying “Stop arming rebels. Then you don’t have to bomb them,” and “Hey Obama, did you wear your Peace Prize when you bombed kids in Syria?”

Mona Nasrallah, a Palestinian-American activist who stood up to police intimidation at last week’s Block the Boat Tampa action, made Saturday’s demonstration her second protest, saying that she is now in the movement to stay.

“I’m against the war on Syria,” Mona told Liberation News. “I don’t think they’re trying to protect anybody. They’re there to make the whole country disassembled, and they’re bombing kids and innocent civilians. They’re not just targeting ISIS. They’re bombing everywhere. Innocent children are getting killed, and I don’t see how we’re justifying that by any means. A child is a child, whether they’re Palestinian or Syrian, and they’re dying there. That’s the main thing I’m against.”

Chris Naprstek, also present at the rally, expressed his suspicions about U.S. motives in the Middle East. “I can’t believe it’s going to affect us that we have to fly over there thousands of miles to stop the ‘evil’ so to speak,” he said. “If they were bombing us, that’s a different story. We’d have to retaliate, but we shouldn’t be on any kind of offensive. We’re too aggressive, we kinda just put our nose in other people’s business. What works here for us doesn’t necessarily work for other people. Everyone should be self-determined.”

Melissa Baird of St. Pete for Peace also spoke to Liberation News. She has been against the wars since she was 14 years old and participated in the protests against the Vietnam War when she was in high school. When the U.S. began to target Iraq, she saw the same similar patterns of endless aggression. She spoke about how, over the years, no matter who she voted for, the wars didn’t stop.

“Obama is just more of the same, in my opinion. Did I hope for something different? Yes. I wished for something different, and I was delusional. I think that unfortunately, no matter who I’ve ever voted for, it’s been the lesser of the evils, and I’ve been grossly disappointed because they always have to get funding from somebody. AIPAC is always a big part of the funding source and Wall Street is the other big source. I’m sorry, but they’re owned. I don’t have any better hopes for Bernie Sanders or Liz Warren, although I had hopes at one point for both of them, but then I hear both of them stand up for Israel and I want to vomit,” said Baird.

Dina Formentini of St. Pete for Peace put the new wars and their illegality into perspective. “We have been bombing Iraq for the last 24 years, for the last four presidencies,” she told Liberation. “This is the seventh country that Barack Obama has bombed compared to Bush’s four. I think that’s monumental. Syria is a sovereign nation, regardless of whether or not Assad is their ruler, and bombing them violates international law. Congress didn’t approve this, so yet again we are bombing a country and going to war in such a way that violates our constitution. On day one, the United States killed eight civilians in Syria, three of them children, and that’s done with my tax dollars. I have a really hard time knowing that.”

Jimmy Dunson of Tampa Food Not Bombs explained the origins of the war in Syria and the absurdity of U.S. bombing. “What we’ve done in Iraq created ISIS, created terrorism in Iraq, and more war isn’t the answer to stop it,” he said. “There’s such a thing called blowback. Al Qaeda was created out of blowback, from U.S. policy in the Middle East, Cold War policy against the Soviet Union. And ISIS was created as blowback from the U.S. war in Iraq. Now I think it’s a combination of trying to clean up that mess that the U.S. itself made by doing the exact same thing that caused the mess in the first place.”

Many groups sponsored the event, including St. Pete for Peace, Students for a Democratic Society at USF, Friends of Human Rights, Freedom Road Socialist Organization, Florida State Progressive Democrats of America, NatureCoast Coalition for Peace and Justice The Refuge, Students for a Democratic Society St. Pete, Poor People’s Economic Human rights Campaign, the Revolutionary Caucus of Tampa bay and the Green party of Florida, ANSWER Coalition and the Party for Socialism and Liberation.