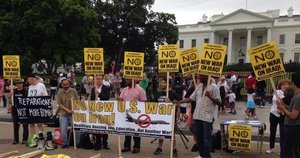 Opponents of the U.S. war machine rallied outside the White House June 21, joining national days of action held throughout the week. The demonstration was attended by members of the ANSWER Coalition, Veterans for Peace, Military Families Speak Out, CODEPINK and others.

On the same day, actions were held in Los Angeles, San Francisco, Sacramento, Eureka, Aubern and Fresno in California; Tallahassee, Fla.; New Haven, Conn.; Boston, Mass.; Minneapolis, Minn.; Pittsburgh, Penn; and Las Vegas, Nev. Altogether, over 20 actions were held across the country in response to the call for the days of action.

Protesters were responding to the increasingly aggressive posture of the U.S. government towards Iraq, especially the threat of a bombing campaign. That Thursday, President Obama announced that up to 300 U.S. military “advisers” would be sent to Iraq.

But the anti-war movement is not fooled by this label. Speaking at the White House rally, ANSWER National Coordinator Brian Becker said, “We recognize that when President Obama says he’s sending military advisers, this is the unmistakable path towards escalation.”

The sickening hypocrisy of the U.S. government, which instigated civil war to divide resistance to the occupation that began in 2003 but is now feigning humanitarian concern, was also a theme of the D.C. action. Mara Verheyden-Hilliard, Executive Director of the Partnership for Civil Justice Fund, told the rally, “I was in Iraq in 2002 with former U.S. Attorney General Ramsey Clark … at that time, the Iraqi people didn’t see themselves as divided along sectarian and religious lines, they saw themselves as a people, as a united people. But the U.S. government and the generals looked at Iraq and said, ‘let us sow the seeds of division.’”

Eugene Puryear of the ANSWER Coalition added, “They don’t ask anyone from the anti-war movement to come on the Sunday shows, and that’s because we were right in 2003 and we’re right now, and they don’t want to be exposed.” Many of the speakers and participants at the rally called for war criminals like Dick Cheney and Donald Rumsfeld, who are now being treated as experts and collecting huge speaking fees, to be held accountable for the atrocities they are responsible for.

The days of action initiated by the ANSWER Coalition and supported by Veterans For Peace, World Can't Wait, CODEPINK and others, showed that the people of the United States do not want a new war, and will fight back against any attempt to escalate U.S. intervention in a conflict that is itself a product of U.S. intervention.