Protests across U.S. to demand: "No New Korean War!"

Show your support by signing this statement!

If there is a protest taking place in your city, email the details to [email protected]. 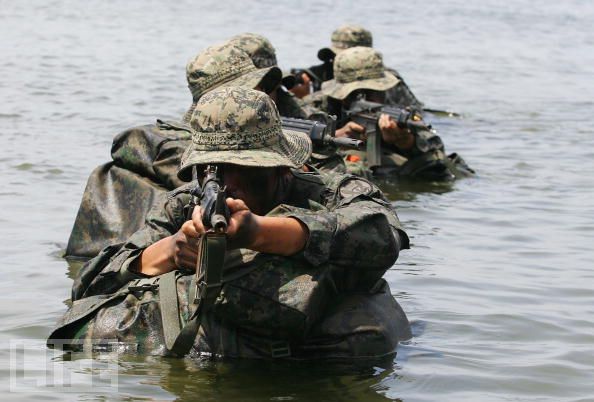 The Obama administration and its South Korean client government led by the rabidly anti-communist President Lee Myung-bak are blaming the Democratic People’s Republic of Korea (North Korea) for the latest escalation of hostilities in the Korean Peninsula.

But in reality the crisis there is the result of a policy of deliberate provocation by the U.S. and South Korea over the past several months. These provocations are targeting both the DPRK and the People’s Republic of China, countries where the often-concealed but very real aim of U.S. leaders -- Democrats and Republicans alike – is “regime change.” They could also lead to a new Korean war, one that could expand to wider regional, and potentially nuclear, conflict.

While hypocritically calling for “calm” in words, Washington is escalating the crisis by its actions. A U.S. naval group led by the nuclear “super-carrier” USS George Washington is on its way to carry out joint military maneuvers with South Korean warships in the Yellow Sea, menacing both China and the DPRK. By moving this huge aircraft carrier into the Yellow Sea the Pentagon and White House are sending a direct, threatening message of escalation since China considers these waters to be part of its sovereign territory.

On November 24, an unnamed “senior administration official” confirmed that the U.S. is escalating pressure on China: “China clearly does not like to see U.S aircraft carriers, for example, in the Yellow Sea.” (NY Times, Nov. 25, 2010)

What's needed to resolve the crisis

The DPRK wants direct talks with the United States, a formal Peace Treaty ending the Korean War, and a normalization of relations with the United States. This seemed like a realizable goal in the last months of the Bill Clinton administration in 1999 and 2000. George W. Bush scuttled these efforts shortly after taking office in 2001. The Obama administration continued this policy with new sanctions and endless war games simulating the invasion and bombing of North Korea.

The anti-war movement and all progressive people and organizations should stand against any new war, and demand an end to the U.S.-South Korean provocations.

In the latest incident, the North and South Korean armies exchanged artillery fire on November 23. Two South Korean soldiers and two civilians were reported killed and others wounded. Casualties on the North Korean side have not been reported. As in all such previous incidents, U.S. and South Korean leaders condemned the DPRK. But, as even a close reading of the universally anti-North corporate media here reveals, the first shells were fired by the South during military exercises staged in a disputed sea area close to the west coast of North Korea.

The North Korean government stated that it was "reacting to the military provocation of the puppet group with a prompt powerful physical strike," and accused Seoul of starting the skirmish with its "reckless military provocation as firing dozens of shells inside the territorial waters of the" North.

The roots of the crisis

The western sea border between the North and South is not recognized as legitimate by the DPRK. It was unilaterally created by the United States, using the mantle of the United Nations as a fig leaf and cover for its actions, at the end of the 1950-53 Korean War. The U.S. and allied forces fought the DPRK under the UN flag, slaughtering millions of Korean people and leveling the northern half of the country by massive bombing. That war further divided a historically unified society into competing states. While an armistice was signed in July 1953, the U.S. has refused the demands of the DPRK to sign a Peace Treaty formally bringing the war to an end.

In recent years there have been at least three clashes in the same area as the November 23 incident. The DPRK had repeatedly warned South Korea against carrying out the latest “war games” the area. In fact, the term “war games” is a misnomer -- these maneuvers should correctly be called dress rehearsals for war. No one knows, moreover, whether any particular military exercises is practice or the real thing, until it is over and done with. This is especially true when the “war games” take place in extremely close proximity to an enemy state.

The U.S. and South Korea annually stage such exercises close to both China and the DPRK. The latest and largest joint drills were held this past summer despite strong protests from both the PRC and DPRK. Those “games,” labeled “Invincible Spirit,” included a simulated invasion of the North.

China’s defense ministry especially objected to the presence of a U.S. aircraft carrier close to its coast. In typical arrogant fashion, a U.S. Defense Department spokesperson responded: “Where we exercise, when we exercise, with whom and how, using what assets and so forth, are determinations made by the U.S. Navy, the Department of Defense, by the United States government.” (Agence France Presse, July 15, 2010)

Imagine for a moment the reaction in Washington if the Chinese navy announced that it was planning to hold similar maneuvers right off-shore of New York or Los Angeles.

The biggest provocation of all is the massive presence of U.S. military bases, troop, nuclear and conventional weapons in the region. In 2010, 65 years after the end of World War II, there are scores of U.S. Army, Air Force, Navy and Marine bases in Korea, Okinawa, and all across Japan. The U.S. has provided high tech weaponry of all kinds to Taiwan. Trident submarines, each of which can launch hundreds of nuclear warheads, and nuclear-armed aircraft carriers prowl the eastern Pacific round-the-clock.

This vast deployment of military power halfway around the world far exceeds that of any other country. It and the tens of billions of dollars it burns up every year is justified to the people here as being for “defensive purposes.” But that is just another Big Lie.

The real purpose of this monstrous military machine is to secure and further the interests of the U.S. corporate power and strategic domination in Asia and around the world. It is the enemy of the people of Korea, China, Japan and the people of the United States.

There will be an emergency protests across the country today and throughout the next week. If you live too far away or can't make it, please take a moment to sign an anti-war statement in support of the rally.