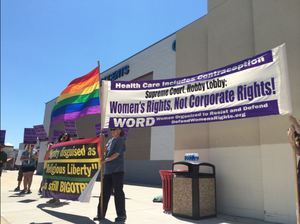 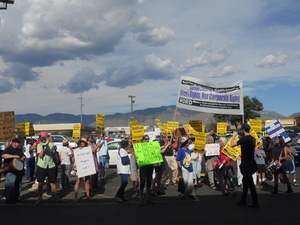 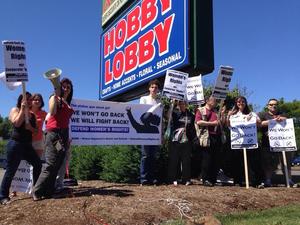 WORD (Women Organized to Resist and Defend) initiated nationwide protests July 3-13 against the outrageous Supreme Court decision in favor of the sexist bosses of Hobby Lobby. These protests are ongoing. Please find initial reports below. WORD's Call to Action and list of upcoming actions can be found here.

A courageous group of over 100 Albuquerque residents lined the busy street in front of a Hobby Lobby on July 7. The group was composed of women and families throughout the city, and activists and organizers from WORD (Women Organized to Resist and Defend), NOW and Personhood for Women and others. The signs were mostly hand made, very witty and representative of frustration at Hobby Lobby, the Supreme Court, capitalism, the disproportionate rewarding of some religions over others, and the residual effects that this ruling will have on other oppressed groups. At one point, the spirited crowd marched right down to the doors of the store, letting them know that “We'll be back!”

During the early afternoon on July 5, activists convened outside of a Hobby Lobby located in Laurel, Md., to stand up and demand justice for women in response to the Supreme Court's recent ruling against the right to equal healthcare and access to contraceptives. This number quickly grew as militant working women passing by decided to join the action.

On July 5, people responded to a call put out by WORD (Women Organized to Resist and Defend) to come to the East Haven, Conn., Hobby Lobby for a demonstration. They came with a message: That the horrible, sexist Supreme Court decision in favor of Hobby Lobby is an outrage and must be overturned, and that reproductive and all health protections must be in place for all workers regardless of what bosses’ beliefs are. Protesters assembled in front of the giant Hobby Lobby sign next to a busy road.

Holding signs reading “Women’s Rights – Not Corporate “Rights!” and “We Won’t Go Back – We Will Fight Back!” the group chanted loudly and was met by approving honks and waves from numerous passing cars. Shoppers pulling out of the parking lot stopped to hear about the Supreme Court decision and what can be done to fight back. One shopper disclosed that she had just been in to Hobby Lobby to return everything she had recently bought there after hearing about the decision.

The protests initiated by WORD (Women Organized to Resist and Defend) are ongoing. WORD's Call to Action and list of upcoming actions can be found here.