Pushing the mentally ill into prisons 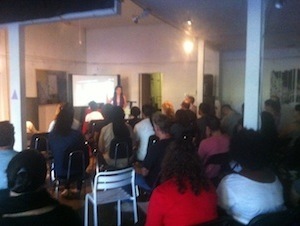 The following is a talk given by Mallory Fites at a forum organized by the ANSWER Coalition (Act Now to Stop War and End Racism) on June 5 at the Sol Collective in Sacramento, Calif.

Hello brothers and sisters, thank you for being here tonight.

Tonight I will be discussing the treatment of mentally ill people by the police and in the prison industrial complex.

The largest population of mentally ill people is not found in rehabilitation centers or hospitals but in prisons. The fact is that Los Angeles’ jails are California’s largest "providers" of mental health care. State prisons alone spend nearly $5 billion annually to incarcerate non-violent mentally ill inmates.

From 2007 to 2011, two-thirds of states reduced spending on mental health. The lack of funding for care for mentally ill people contributes to other social problems, such as homelessness, and affects not just those with mental illnesses but society as a whole.

General overview and history of the treatment of mentally ill people

In 1952, French surgeon Henri Laborit found that a drug for allergies could be used to subdue his patients before surgery. The drug was called chlorpromazine. Laborit convinced his colleagues, psychiatrists Jean Delay and Pierre Deniker, to begin testing the drug for patients with schizophrenia and realized the drug would make patients calm and subdued. This became a major breakthrough in the treatment of mentally ill people with pharmaceutical drugs.

Smith Kline began marketing the drug to psychiatrists, where it got little acceptance. The company then met with state legislators. The pharmaceutical giant pushed the drug as a way the government could save millions of dollars by prescribing chlorpromazine to mentally ill patients housed in state hospitals.

Giving this medication to mentally ill people would make the person well enough to be discharged without actually treating the illness itself. This was a temporary treatment to free up psychiatric beds for more patients, creating billions in profits for Smith Kline.

Little consideration was given to whether a patient could afford the drug after discharge or to its dangerous side effects. State hospitals were under attack during this time for cruel and inhumane treatment of mentally ill patients, so state legislators believed funding this drug would save millions of dollars by emptying psychiatric hospitals beds while they escaped public criticism.

Smith Kline marketed chlorpromazine under the name Thorazine. State hospitals began emptying their beds almost immediately with the increased use of the drug. In the first eight months on the market, it was given to over 2 million patients, and within 15 years Smith Kline’s revenues doubled three times.

State hospitals began emptying their beds immediately. From 1963 to 1980, the inpatient population fell more than 75 percent.

The community mental health centers were never built, and the government began focusing instead on waging war against the Vietnamese people and covering up the Watergate scandal.

Hundreds of thousands of mentally ill patients were put on the streets in the 1980s, and many former patients began arriving in jails and prisons.

Amanda Pustilnik, associate professor of law at University of Maryland and an expert on the relationship of law, neuroscience, and mental health policy writes: “According to the Department of Justice nearly 1.3 million people with a mental illness are incarcerated in state and federal jails and prisons—compared to about 70,000 people being served in psychiatric hospitals.” Also, “the most typically mental ill person is someone who is poor, female and non-violent.”

Most often, people with a mental illness are not criminals but get into trouble because of their symptoms of an untreated mental illness. Yet the capitalist state has deemed the mentally ill to be criminals and has made jails a “repository” of the mentally ill. Putting people in jail is a way to contain and alienate certain groups of society. The mentally ill have been one of those groups that has repeatedly gone underserved and are often simply waiting for a psychiatric evaluation, a hospital bed or transportation to a hospital when instead they are incarcerated.

A look inside prisons and the treatment of mentally ill people

So what are the conditions like for the mentally ill in U.S. jails and prisons?

Former Washington Post reporter Pete Earley took a look at Miami’s main jail, the Miami-Dade Pretrial Detention Center. His investigation in 2006 found that inmates are held in large group cells with 50 persons in each cell. The guards on the ninth floor where the mentally ill are put, do not receive special training on how to handle mentally ill inmates, and the nurses on this floor are paid $2,000 less per year than nurses in Miami hospitals.

Mentally ill inmates who have attempted suicide are held in solitary confinement in cells that have shatter-resistant glass., They are kept naked, and the temperature of the entire wing is kept at around 50 degrees Fahrenheit (10 degrees Celsius) to deter “trouble.”

Each cell has a plastic bed built so the prisoner can be strapped to it with their legs spread. Suicidal inmates are not given sheets, blankets or pillows. They cannot have any sort of entertainment, including radio, magazines or books. All they can do is sleep or look out the small glass window. Earley found that under these sadistic conditions a suicidal individual’s mental health can only further deteriorate.

There is only one psychiatrist for the entire floor, which allows the psychiatrist to spend 13 seconds with each inmate on any given day. He has no authority or time to perform comprehensive mental exams, and there is no doctor-patient confidentiality.

The brutality against mentally ill people by police

Having been in a mental health facility and received care, I witnessed a lot of abuse on every level of the institution from the pickup of mentally ill people to the treatment they receive inside the facilities. I realized that many of the people in there could easily be treated with the proper medication and care and return to society. Instead, they receive physically and mentally abusive treatment.

I can recall many instances where patients were grabbed, pulled, lifted and carried off into a seclusion room for “acting out,” which was really a behavior caused by their mental illness, not because they were being deviant.

The trauma I have experienced from being treated in a mental health facility is only a fraction I can imagine for mentally ill people in prison. The police are usually the first point of contact for a person who is reported by others as “acting out or incoherent.”

Police have no training in picking up and dropping off mentally ill patients. They do not talk to the person suffering from a mental illness; they simply use force because they can control the person more easily. Instead of understanding that mentally ill people are in a different state of mind than the rest of the population and respond with sensitivity and care when transporting the person, they use aggression.

When I compare my experience to Oregon’s mental health programs, there is a stark difference in the treatment I received here in California. When I was first diagnosed with bipolar in 2006, I experienced my first manic episode and was brought into the hospital by my parents. I was then transported by people with sensitivity training to a mental health facility.

However, when I was in Sacramento and had my second manic episode, I was picked up from my home by the police. I was on my porch when they arrived, and terrified when I saw three police officers walking to my door. I ran inside and was about to shut the door on them when I was rushed by the police and slammed against my kitchen wall. I was then turned around and handcuffed and rushed down my stairs. I was terrified and unaware of what was going to happen to me. I did not even recognize that I was going through a manic episode.

The police gave no words of explanation as to what was wrong with me or why I was being taken in. When I cried for any information about what was going on, I was ignored. They thought I was violent and a danger to myself and others, because I resisted their arrest. I was labeled a 5150, an involuntary psychiatric hold, for two weeks.

I was only able to speak to my sister once over the period of three days. During that time, I was locked inside a white empty room with a plastic bed, no sheets, no pillows and nothing to keep my mind off of what would happen to me. I would look outside the door in my seclusion room and cry for someone to talk to me, to listen to me, yet no words of explanation were given.

I know I am not alone in the aggression mentally ill people face when being picked up by the police. As if people who are mentally ill are not already suffering with their own reality, they get treated as if they are criminals.

The criminalization of the mentally ill

So who are the mentally ill? First off, they are daughters, sisters, friends, mothers, sons and fathers, and the list can go on. Most importantly, people must understand that they are people who suffer from a chemical imbalance in their brain and are often born this way like myself. They require medication to balance out the chemicals in their brain to function as a healthy person. They require proper medical attention, care and rehabilitation to return to a healthy mental state.

The instability of a mental illness coupled with an unstable capitalist society make the treatment of mentally ill people problematic. The social ills like high rates of unemployment and lack of health care and social services affect the mental state of many people living in the United States.

The mentally ill are people who have been born with an illness and are alienated in society because the capitalist state does not want to provide the care they deserve. They would rather make profits for pharmaceutical companies and building prisons and reap the benefits of containing a population that is suffering not only from physiological differences but social ills that affect them differently than their mentally healthy peers.

If the health care institutions were based on care for patients rather than profits, funding could be used to train health care professionals and police on how to respond to mentally ill people and provide long-term medical care.

I hope that one day no person has to go through the trauma I did when suffering from a mental illness. I would like to share a piece of spoken word with you about my experience with police brutality, as a person with a mental illness.

Cold metal handcuffs are forced around my wrists

I look into the eyes of stern faces

Frightened bewildered, and tied I’m unaware of my destination

All of which I know the answers to

But I have questions too

I was slammed against my kitchen wall and asked what drugs are you on?

They refused the words from my mouth as being true

I was taken from my home that day, unable to speak to my family and unaware of what was happening to me

But the care that they deserve will never be there